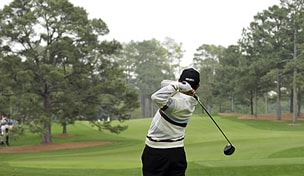 SOCHI, Russia – So you probably heard that Augusta National had to take down Eisenhower’s Tree. When I was 24 years old, in the luckiest break of my career, I was hired to be the sports columnist for The Augusta Chronicle. There was no reason for anyone to believe I could handle such a job. Most of the time, I could not. But people in Augusta are kind.

The most significant part of the job, naturally, was writing the lead column during the Masters Tournament. This would have been especially exciting except for one small hurdle: I knew absolutely nothing about golf. Well, that’s an exaggeration. Tom Watson. Jack Nicklaus. Ben Hogan. I’d heard of them.

That’s about it, though. I’d never played a round of golf. I had never been to a golf tournament. I only vaguely recall ever watching golf on television – I watched Nicklaus at Augusta in ’86 and I seem to recall seeing Watson’s chip-in at Pebble Beach (in 1982). That about covered it, though.

And suddenly I was placed at the media center of the biggest golf tournament on earth. In those days, there was no Internet, no social media, no reading options. People who came to the Masters – from writing legends like Dan Jenkins and Jim Murray to the CBS television crew to golf fans who had built their lives around their Masters trip to the players themselves – had only one paper to read: The Augusta Chronicle. And I was writing the front-page column.

It’s a good thing I was 24 and utterly clueless. Today I’d probably have a coronary.

Here’s what I remember: On the first day of my first Masters – I cannot recall if it was the Sunday before the tournament or the Monday – the sports editor, Ward Clayton, took me on a tour of the course. I had spent months studying up on Masters history and Augusta National’s lore. I spoke at length with Herbert Warren Wind, who coined the phrase “Amen Corner” for the 11th, 12th and 13th holes. I picked the brains of Jim Nantz, Davis Love III and Ben Crenshaw, who love the place as much as anyone. It was like cramming for a bar exam.

And then, Ward took me out on the course, and he showed me around. Augusta National was different then. There was no rough (or “second cut” as they insist on saying) and the holes were a lot shorter in places. Ward showed me the big oak tree outside the clubhouse – where I would spend countless hours waiting and waiting and then interviewing Arnold Palmer, Gary Player and the rest. He showed me the Hogan Bridge and the Nelson Bridge, both crossing over Rae’s Creek.

And he showed me Eisenhower’s Tree.

The tree was usually referred to as THE Eisenhower Tree – but I always preferred the possessive “Eisenhower’s Tree.” It rested by the 17th fairway, to the left from the golfer’s point of view, about 210 yards from the tee. It was said that Dwight Eisenhower when he was president and after hit that tree so many times that he asked for it to be removed. The image of that plainspoken Kansas man who planned D-Day barking, “Somebody get this damn tree out of my way,” is one of my favorite in all of sports.

Clifford Roberts’ and the club defied Eisenhower’s wishes – though I’ve never really known how serious Eisenhower was about it. I’m guessing he could have gotten that tree removed – heck he sent federal troops into Arkansas to enforce school integration. Anyway, I’m glad he didn’t follow up. Eisenhower’s Tree was gorgeous, as so many trees at Augusta National are. It was a loblolly pine, people who know such things told me. It was well more than 100 years old, and it liked to get in the way of golf shots, at least in the early days.

The stories. So many stories. Tommy Aaron once hit a ball that flew into the tree … and it didn’t come down. His caddie supposedly told him, “balls don’t stay in that tree,” but they couldn’t find it anywhere else. It had to be in the tree. Aaron played on without it. The next day Aaron was walking by the tree. A golf ball fell out.

Nicklaus hit that tree so many times that, at times, he would grumble, “Why didn’t they listen to Ike?” Tiger Woods hit a ball into that tree and then hurt himself trying punch it out from the pine straw. Tom Watson used to say that every time he walked by Eisenhower’s Tree he would remember to glance at it, pay his respects.

As time went on, Eisenhower’s Tree did play less and less of a role in the golf tournament. Golfers just hit the ball so much longer and higher than they did before the explosion in golf equipment technology. Don’t get Nicklaus started on how far golf balls fly these days. Bubba Watson, one of the longest hitters in the world, won at Riviera on Sunday and when asked about the tree said, “Yeah that’s a historic tree. I’ve never had a problem with that tree so it doesn’t really affect me much.” That’s frank but true. In the words of golf announcers, Eisenhower’s Tree was “not in play” for today’s golfers.

But I, like countless golf fans, never stopped loving it. During Masters week, when I did not know what to do – which happened pretty often – I would go to the 17th fairway and stand by Eisenhower’s Tree and just try to take it all in. Augusta National during Masters week, whatever else you might think of it, is one of the happiest places in the world. By that I mean everyone who is there is happy. Some of them dreamed of coming their whole lives. Some of them have been coming back, year after year, for generations. The weather is warm, the food is cheap, the grass glows green, and every time something good happens you can hear roars ringing through the pines.

In sports, in life, we attach meaning to things and places where we felt joy – that’s nostalgia and it’s part of what it means to be human. We love our first car, our first home, the movie theater where we saw “Star Wars” the first time or the Green Monster at Fenway Park. An old summer song can make us whiff the ocean and another time. Hearing Vin Scully say, “Pull up a chair and spend the afternoon with us,” can make us 13 again.

When Augusta National announced that the winter storms had forced them to take down Eisenhower’s Tree, I felt 24 again, just starting my first big job, full of hope and anxiety and a sense of wonder. I cannot calculate how many hours I spent under it or by it and just watched and listened. Augusta National has announced it will put something to honor Eisenhower and his golfing incompetence in its place – maybe it will be some kind of ball magnet that pulls majestic shots out of the sky (take that Bubba!). Sadly, time does move on. Even at Augusta National.