Remembering Ouimet: The search for Francis 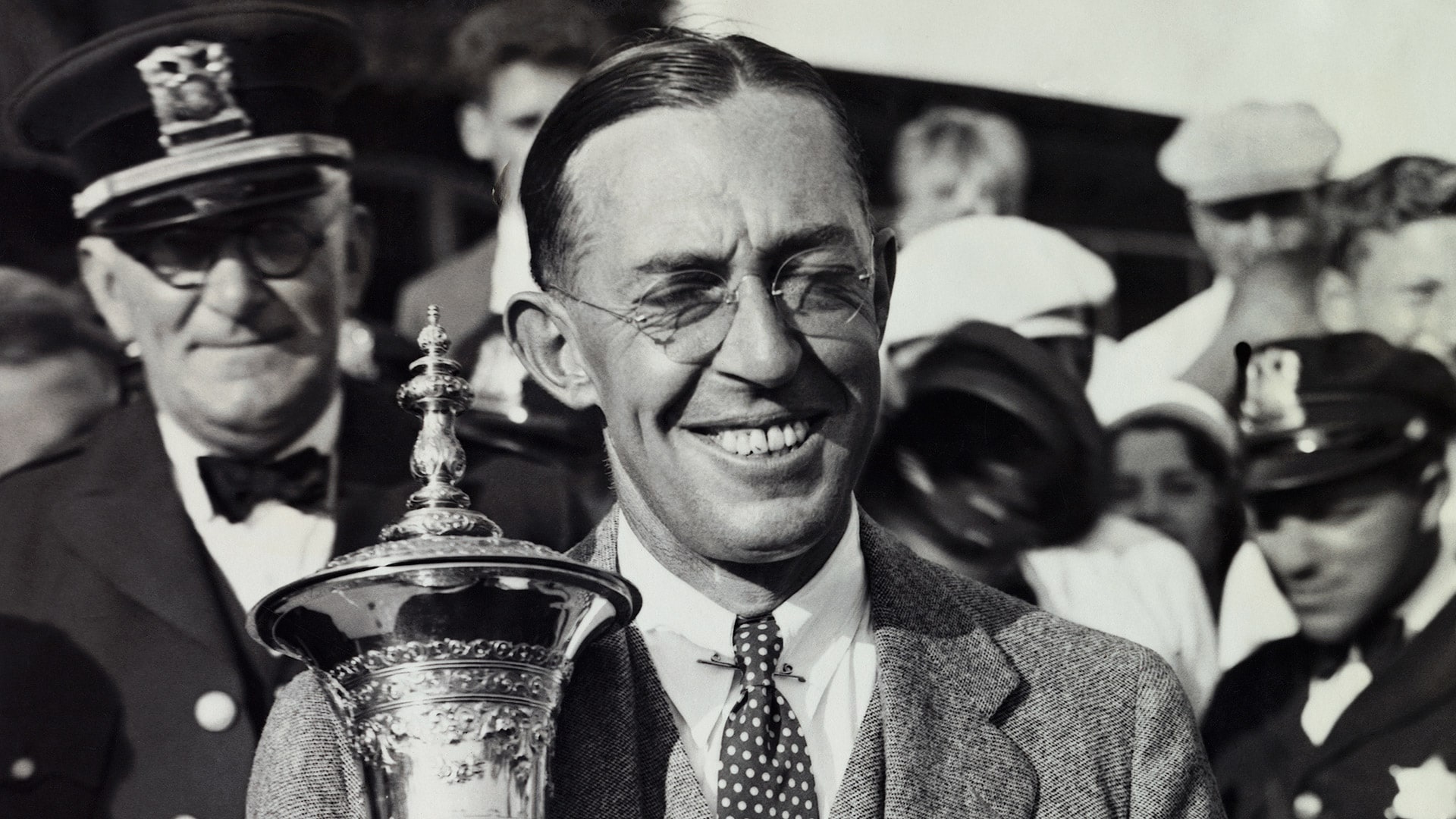 BOSTON – You don’t stumble across Barbara McLean’s home. You have to go looking for it (praise Jesus for Google maps and iPhones).

It resides down in the tail-end tip of Massachusetts, near Cape Cod, in the town of Osterville. Inside, there is an obvious Francis Ouimet feel, which is appropriate since Barbara is his daughter. But aside from the famous image of Francis in his red R&A captain’s jacket which hangs above her mantel, most else needs a bit of explaining.

“Everything of interest to me was stuff around the house,” Barbara says. “The things that I kept were the things that meant the most to me.”

Among the items in Barbara’s house include Francis’ original World Golf Hall of Fame plaque, presented at Pinehurst in 1974. There are some small, engraved cups for awards given to her father and a handful of post-mortem tributes, but nothing that jumps out at you in terms of significance.

That’s because the significance is personal.

“That trophy over there,” Barbara says pointing to an antique-looking, silver piece of memorabilia. “That is the Shepard’s cup. That’s one of my favorites. Caitlin used to sit in that when she was a baby.”

Caitlin is Barbara’s granddaughter. The John Shepard Jr. trophy was won by Francis in 1914, in a tournament contested among Boston-area clubs.

On a table rests a gold medal. It was given to Francis for tying third in the 1925 U.S. Open. Barbara used to wear it around her neck as a charm, on a chain which formerly held her father’s pocket watch.

In searching for her father – the notion of who he was – I met Barbara and her husband of nearly 71 years, Obder “Bro” McLean, at their Massachusetts home. We talked for two hours, even had coffee and English muffins. I also talked to Francis’ granddaughter, Sheila Macomber, and his great-granddaughter, the aforementioned Caitlin Wallerce.

If you can judge a man based solely on his descendants then, on first impression, Francis Ouimet was an exemplary individual. His family, and others engaged during a three-day visit to the Bay State, substantiated that assessment.

The centerpiece of the trip was the annual Ouimet Scholarship Fund gala, this year celebrating the 100th anniversary of Francis' 1913 U.S. Open triumph. Arnold Palmer was the honoree (he was also honored at the first gala in 1997). Mark Frost, who authored “The Greatest Game Ever Played,” based on Ouimet’s improbable victory, was there, as was Bill Paxton, who directed the movie. There were several video tributes, including those from Jack Nicklaus, Gary Player, PGA Tour commissioner Tim Finchem and R&A chief executive Peter Dawson.

The highlight of the evening, however, was Julia McCarthy.

McCarthy is a Ouimet scholar, of which the fund motto is: “From what golf has given you – let’s give back to golf.” Since 1949, 5,100 young men and women who work in the Massachusetts golf industry (many who served as caddies like Francis) have been granted a total of $26.5 million in financial assistance to help obtain a college education.

Ellis Jones was a recipient. He is now a 27-year-old husband and father of two, who is successfully working as a Xerox auditor.

“The scholarship gave me the opportunity to really further my education,” Jones says. “It relieved angst and anxiety. Without it, it would have meant taking a lot more loans and it would have been a decision (whether or not to go to college) I would have really had to think about.”

Ellis grew up attracted to golf; he began playing when he was 6. As Julia puts it in her speech before 2,100 attendees the night of the gala, “I did not grow up with an instinctual love or gravitation toward the game. I never went to any summer camps or clinics to improve my own play. ... I did not come to love golf so naturally. I first came to golf in order to help out my family.”

Julia is one of 11 children. When the economy tanked, her family lost their home and they hotel hopped for several months. Her father also split on them.

She started caddying at Green Hill Golf Course while in the seventh grade, after the facility got funding to accept inner-city kids to a caddie program. In addition to helping her mother pay for gas and groceries, she earned something of more lasting value than a paycheck.

“Every time I was at that golf course, I felt at peace,” she says. “I found a renewed faith in manners, in people. I felt safe, wanted, valued.

Julia is currently a sophomore at Holy Cross, majoring in English and theater.

“We’re not talking about golf,” Palmer says that evening, in relation to the scholarship fund’s importance. “We’re talking about people and children and letting them know how important their actions are on our lives.”

During the gala, Frost remarks, “All you had to do was listen to Julia’s speech and know where (Ouimet’s) impact is being felt today.”

And the genesis was Brookline.

Facing The Country Club’s 17th hole is 246 Clyde Street, home to the Ouimet family. At least it once was. It is currently owned by Jerome and Doris Wieler.

“The historical footprint is still the same. The rooms are the same size. Other than a few things here and there, very little has changed on the inside,” Jerome says.

The outside of the house looks very similar to historical photos. Except there is a fence out front now, along with four lanes of paved road and an employee parking lot between the house and the club. The backyard, which used to be a cow pasture and was where Francis’ brother Wilfred built three holes, is now trees and manufactured property as far as the eye can see.

A peek through the front porch window shows the old hardwood floors and the confined rooms. It also alerts a slightly chagrined home owner. But he’s used to strange people snooping around his house.

“Interest in the house goes in spurts,” Jerome says. “It picked up with the book, the movie, the (1999) Ryder Cup (at Brookline). People wanted to talk to us and take photos of the house.

“My wife and I are not golfers, but when we moved here I read up on him. I can say that I have really come to admire Francis Ouimet. Everything I know about him shows that he was a genuinely decent man.”

A couple of miles down the road from his childhood home, in Holyhood Cemetery, Francis is buried alongside his wife of 49 years, Stella Sullivan.

Armed with a digital image of the headstone and this knowledge, but without the knowledge that the cemetery is situated over 35 acres, I embarked on a futile endeavor.

Amazingly, I found a Ouimet headstone for Arthur and Mary Ellen, Francis’ parents, but gave up on the Sullivan search after an hour. Apparently, John Sullivan is a very popular name in the area. At least it used to be. It seems everyone with that name has died and been buried at Holyhood.

The final stop on the trip is the William F. Connell Golf House & Museum at TPC Boston, home to the PGA Tour's Deutsche Bank Championship. It houses the Ouimet Room as well as the office of Bob Donovan, executive director of the Francis Ouimet Scholarship Fund.

As Donovan shows, the room is sectioned according to different aspects of his career, ranging from his Walker Cup appearances (nine times as a player, three times as a nonplaying captain) to his U.S. Open victory to the book and movie which honored his great accomplishment.

There are artifacts, like the $.25 stamp commissioned in his likeness in 1988, making him one of only four golfers to have such an honor (Bobby Jones, Babe Zaharias, Palmer), trophies and presidential letters. Again, there is the famous Red Jacket portrait, which Donovan points out was painted by president Dwight D. Eisenhower and that the original version resides at the Royal & Ancient Golf Club of St. Andrews in a “place of prominence.”

Ouimet's most significant memorabilia resides at the USGA Museum, in Far Hills, N.J., in an exhibit entitled "America's First Golf Hero." It includes his putter and four of his irons from his 1913 victory – mid-iron, mashie, mashie-niblick and jigger; the three balls used by Ouimet, Harry Vardon and Ted Ray in the playoff; their scorecards and Ouimet's championship medal. It also houses his championship medals from the 1914 and '31 U.S. Amateurs.

His red R&A jacket hangs there, as well. Funny story about that coat.

"My sister had one of those portraits over her mantel piece," Barbara tells, referencing the one that hangs in her house. "One day there was a girl playing there, and she said to Les (Barbara's niece, Leslie), 'Who is that?' Les said, 'That's my grampy.' The little girl says, 'What is he, a waiter?'

"Dad would have gotten a big kick out of that." 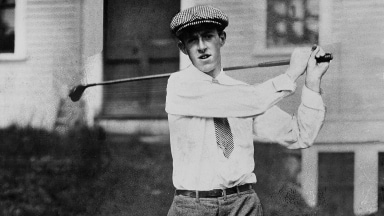 Remembering Ouimet: Who was Francis?

We know him as the amateur who won the 1913 U.S. Open. His family knows the real Francis DeSales Ouimet. Mercer Baggs with the story.