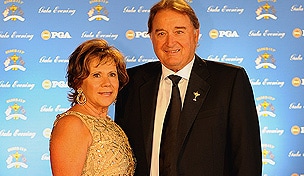 Getty Images
THE BELFRY - 29 SEPTEMBER: Sergio Garcia of Europe celebrates victory after the final day singles of the 34th Ryder Cup matches between Europe and the USA at the De Vere Belfry in Sutton Coldfield, England on September 29, 2002. Europe won 15.5 to 12.5. (photo by Andrew Redington/Getty Images)  -

ORLANDO, Fla. – The most famously intense eyes in golf are all soft now.

Raymond Floyd’s icy blue orbs are glistening and his voice cracking as he pauses over lunch in the clubhouse after a practice round at the PNC Father-Son Challenge at Ritz Carlton Golf Club.

His eyes, practically registered weapons at the height of his powers, are far away, fixed back to a better place in his mind. They’re fixed on his beloved wife, Maria, and that was always a better place for the Hall of Famer. Three months after his wife’s passing, in his most public appearance since bladder cancer claimed her, Floyd is back this week among golf family, back among old colleagues and rivals who have become dear friends.

His appearance stirs emotions because Maria was always a fixture at Ray’s side. That makes his appearance a little jarring, not just for Ray and his son, Robert, who is here as his father’s teammate. It’s also jarring for Floyd’s peers, who came to admire Maria as much as they admired Raymond. They were a formidable team.

“I felt like I was the most blessed person in the world to have her in my life for 40 years,” Floyd said over lunch. “She was my partner, and she was my best friend.”

“I’ve always said I had my career before I met Maria and my career after I met her,” Floyd said.

“Raymond became a great player after he married Maria,” said Lee Trevino, who also is playing the Father-Son Challenge. “Maria was even tougher than Ray. She was absolutely a straight shooter. She would tell you the way it is, whether you liked it or not, but she was your best friend telling you that. She was Raymond’s rock.”

Ray met Maria at the Palm Bay Club in Palm Beach, Fla., back in the early '70s. Ray was dazzled when the owners of the club introduced them. She was Maria Fraietta back then, and she owned a fashion school. Seeing her a second time, with Maria picking up her mail at the front desk of the Palm Bay Club, where she lived, Ray surprised her. He put a hand on top of hers.

“So when are we going to have dinner?” Ray asked her.

“Well, I don’t know, when do you want to have dinner?” Maria asked back.

“As soon as possible,” Ray said.

Nine months later, in 1973, they were married. Nine months and two weeks after the wedding, they had Raymond Jr., the first of their three children.

It was a remarkable whirlwind romance that staggered Ray’s friends on Tour because Ray had built such a reputation as a playboy. Floyd owned a piece of a bar in San Francisco called Coke’s. He sometimes played guitar on stage and was an investor in the Ladybirds, a topless band. He was probably more like Walter Hagen than Hagen actually was, but Floyd’s affinity for the nightlife didn’t serve his game well.

“I was in awe of being in the limelight in Los Angeles, New York and Chicago,” Floyd said. “I had a heck of a time as a young bachelor, but I went through periods where I didn’t apply myself.”

On one of his first dates with Maria, Ray told friends gathered at their table that he was a “confirmed bachelor.” Maria liked to tell that story years later, delighting in revealing how quickly they were married after he said it.

“When I said, `I do,’ I did,” Ray said. “I committed to my vows. I never played around, and I never thought about it after I got married.

“I met the woman of my dreams, and she had me.”

A day after Maria’s death, Ray put their Palm Beach house up for sale. He said he couldn’t bear living in it without Maria. He has moved into the couple’s golf cottage at Old Palm Golf Club in nearby Palm Beach Gardens. The only time he has even stepped back on to the island since Maria’s death was to appear for a dinner honoring her for one of her many philanthropic projects, restoration of the historic Palm Beach Par 3 course.

“We lived in Palm Beach for 15, 16 years,” Floyd said. “It was our dream house there. She really made the house, and we both loved it, but we talked about what we would do if one of us passed.”

Maria knew Ray couldn’t live there without her, and she told him she wouldn’t be able to either if she ever lost Ray.

“It’s going to be hard for me to go back to Palm Beach,” Floyd said. “Everything we did there, we did together. For me to be going and doing things in Palm Beach without her would be very difficult.”

Though Floyd didn’t play golf with Maria, though she didn’t know the real intricacies of the game, or the nature of specific shot making, she knew her husband better than anyone. That was more important. She knew him and loved him.

Floyd has so many stories that demonstrate Maria’s effect on him, but one of his favorites was their ride to Shinnecock Hills and the U.S. Open in '86 after he blew a chance to win the PGA Tour event in Westchester. He shot 77 in the final round at Westchester.

On the road after, with their three children in the back seat, Maria wanted to know why Ray faltered so badly with a terrific chance to win.

“She wanted to know what made me blow up,” Floyd said. “Your immediate reaction is to put your dukes up. I said `Hey, it just happened. It was one of those days.’”

“I don’t accept that; something made it happen,” Maria said. “What if you’re in the same position this week at the U.S. Open? Are you going to do it again? You have to face what happened.”

Robert was 10, but he vividly remembers listening to the conversation in the back seat.

“I actually remember sympathizing with my dad,” Robert said. “Mom usually waited a day to talk about something like that, but she was tough. I don’t really remember it as a conversation.”

Ray chuckles at this.

“It was literally a war for two hours,” Ray said.

A wonderful war that captured what made Maria and Ray work so well together.

That next week, Floyd broke through to win his first and only U.S. Open.

“Some of Dad’s best tournaments were after they talked about things like that, or talked about Dad’s attitude,” Robert said. “If Dad came off a practice round complaining about the course, Mom would say, `If you don’t want to play, we can leave.’ Some people might not have been able to handle that, but my dad was always able to respond.”

Ray loved that Maria cared that much.

“I had the good sense to respect her opinion,” Floyd said.

Maria was almost as much of a force on the PGA Tour as Ray. She and Barbara Nicklaus formed the PGA Tour Wives Association. She was also very involved in numerous charities, including those to battle cancer. Ray said he and his children were overwhelmed by the nature of the cards and letters they received after Maria’s death.

“People who hardly knew Maria felt like they could come to her and ask for help,” Floyd said. “You should see the letters we got, and the cards from people who didn’t know her well but were grateful and admired her because she helped them so much.”

Davis Love III said he and his wife, Robin, found role models in the way Ray and Maria were a team. Love played with Floyd at the ’93 Ryder Cup.

“The big thing I learned from Raymond was how he always said, `Maria and I,’ how he always put her first,” Love said. “The love they had for each other, the respect, you saw it. They were great leaders. My wife, Robin, always looked up to Maria and how she wanted to do for others.”

Floyd is learning to live his life without his partner

“How am I doing?” Floyd said. “I’m doing better. Time is helping. I’m learning how I’m reacting, how I’m going to react, but I also know, the rest of my life, she will always be there for me.” 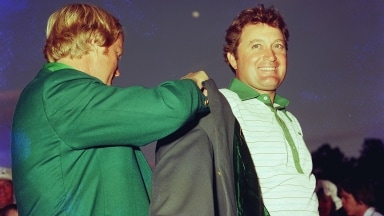 Forty years after his Masters win, Raymond Floyd talks about his record week and his secret weapon. 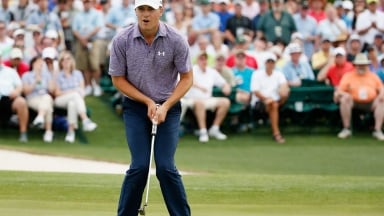 Through 36 at Masters, Spieth already in elite company 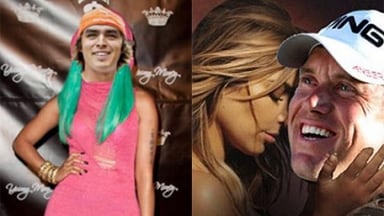 The Internet is an interesting place. One minute you're getting the latest updates on your favorite NFL team, the next minute you're perusing 18 dogs who were put in the fridge.