ATLANTA – It is one of the most inspiring comebacks in the history of the game, a Lazarus tale that stirs heart and mind.

No, not that 3-under 32 on East Lake’s back nine Thursday that lifted Tiger Woods from the bottom of a short field and onto a short list of Tour Championship contenders and within 54 holes of second FedEx Cup crown.

Although the world No. 1’s ability to turn lemons into lemonade is legendary, Cink’s assessment was offered when he was asked how far the Donald Ross gem has come since he first put tee in rolling ground in the fall of 1991.

Cink was a freshman on the Georgia Tech golf team and joined the squad at East Lake for a practice round. What he saw scared him, really. The clubhouse was rundown and in need of a complete facelift and the golf course, although still the shell of the layout where Bobby Jones honed that silky swing, was in desperate need of a lawnmower and chain saw.

And the on-course blight was an overgrown oasis compared to the rough-and-tumble environment that loomed just the other side of Second Avenue.

“There used to be one of the most dangerous and notorious housing projects in the U.S., East Lake Meadows,” Cink recalled. “It was scary over there and there was a lot of death, a lot of crime. It was a sad story.”

The course, however, was a classic, too good to dismiss despite the warzone that persisted on the other side of the hedges. The Tech team had a running bet during practice rounds at East Lake, if anyone heard a gunshot or a siren it was an automatic press.

The team would play East Lake regularly, but you had to be off property by the time the sun went down. During one practice round a player was held up at gun point through the fence adjacent the 14th hole.

But that didn’t stop the Yellow Jackets.

“It was dangerous back then, but we liked to take advantage of it because no one ever played here and we could almost always get on,” said Cink, now a member at East Lake who figures he has played the layout 60 times.

It’s something in the water, or so it seems, that forces golfers at Georgia Tech to form a trans-generational bond with Jones, who also attended Tech before he began Impregnable Quadrilateraling golf’s grandest keepsakes.

The locker room may have screamed muni, but the halls and holes dripped with history.

“It was still amazing to come here because you have all the history,” said Brian Newton, a Tech golfer from 1993 to 1998 and now a player manager with Gaylord Sports. “The course was in horrific shape, but it was still an unbelievable place.”

In 1993 Tom Cousins purchased the course from what membership remained and began one of golf’s most improbable comebacks. Cousins, a lifelong member of East Lake and one of the nation's top real estate developers, returned the course and clubhouse to its former glory and convinced the city to initiate a revolutionary revitalization project.

East Lake Meadows was razed and in its place was built Charlie Yates Golf Club complete with a First Tee complex. Surrounding public housing was transformed into a mix of lower-income and higher-end housing.

Residents who had fled to suburbia returned, the Tour Championship found a new home and on Thursday Cink posted his second-best round in six finales at East Lake to pull within one stroke of front-runner Sean O’Hair.

“It has really gone from declining to being one of the top clubs in the area, maybe the nation,” said Cink, who brought the Claret Jug to East Lake this week because he felt it was a proper tribute to the club and Jones.

The best ideas are copied, and officials in New Orleans are aggressively attempting to replicate the East Lake project in the City Park neighborhood, which was devastated by Hurricane Katrina.

“We’re still working on it. It’s just going to take some time,” said David Toms, who will likely be a player consultant on a Rees Jones design New Orleans officials hope will be the center piece of their project.

But to appreciate East Lake the most, you had to be there before the clubhouse renovation, before the greens were re-grassed and the layout was groomed to perfection, before it became the Tour’s annual exit party.

“I think it’s funny when people say what a bad neighborhood it is now. It’s nothing now compared to what it was,” Newton said. “To come back and see this place, it’s incredible.”

Cink would agree. And that Woods rally to close his round wasn’t bad either. 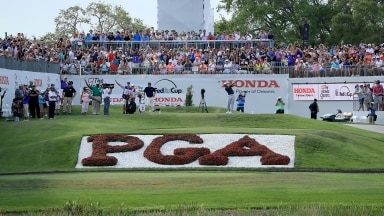