The Fighter, Part 2: The opening round 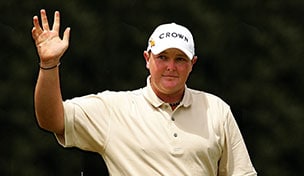 Getty Images
Paulina Gretzky of the United States poses for a picture during the opening ceremony of the 2015 Presidents Cup at the Convensia Ceremony Hall on October 7, 2015 in Incheon City, South Korea. (Photo by Scott Halleran/Getty Images)  -

SHEPPARTON, Australia – At 6-foot-2, 230 pounds, there wasn’t a competitor or competition that 17-year-old Jarrod Lyle feared, but the look in his doctor’s eyes was foreign and frightening.

A few days earlier in the winter of 1999, Lyle had taken a spill playing Australian rules football with some friends. A bruise almost immediately emerged on his shoulder and continued to grow. The next day as Lyle’s mother, Sally, was dropping him, his brother, Leighton, and sister, Karly, off at school, Jarrod nearly passed out from the pain. Sally rushed him to see the family doctor.

“As I took my shirt off to show (the doctor) this bruise you could see something in his eye that sort of clicked and I thought, that’s not a very good look in his eye,” Jarrod Lyle recalled.

Before the sun set Lyle and his family were on their way to Royal Children’s Hospital in Melbourne, 100 miles to the west, where doctors confirmed the onset of acute myeloid leukemia.

“I burst into tears and thought I didn’t even really know what leukemia was,” Lyle said. “You associate cancer with death because it’s all you ever hear. You know such and such died from cancer.”

Each morning for the next few emotional months, Lyle would wait for his mother in a nondescript room on the third floor of the hospital. Sally Lyle, the prototypical matriarch of a strong Australian family, doesn’t tolerate negativity. If you’re not looking forward, you’re wasting valuable time and energy. It is a trait that likely led Jarrod to confide in his father, John, in the dark moments immediately following the initial diagnosis.

“Why me?” Jarrod asked his father.

It was a moment of self-indulgent wallowing out of character, not just for the next nine months, but for a lifetime filled with equal parts adversity and achievement.

“That was probably the only time he said anything like that through the whole nine months of his treatment,” John Lyle said. “It was just one little instance and the rest of it was just he was looking forward to beating it.”

With time Lyle’s resolve to win each day’s battle strengthened. Within a month doctors had declared him cancer free. There were more treatments and sleepless nights, but there was always something that drove him to the next day, to the next battle.

At 7 years old, Lyle would wait for his father on the 15th tee at Shepparton Golf Club, a tree-lined layout that weaved its way along the Goulburn River, and he would caddie down the stretch before heading back out to play a few holes with his father’s clubs. He set the course record at “Shep” as a junior – a mark that was later bested by his brother, Leighton – and was a regular on the country teams that make up the core of amateur golf in Australia. It was this love for the game that became his singular focus on May 13, 1999, as he made the long, silent drive to Melbourne to begin his nine-month bout with leukemia.

Even while he endured the ravages of chemotherapy, Lyle not only continued to play but his game improved. He won a junior event while still in treatment and even represented his district in an annual Country Week event the day after a particularly debilitating bone-marrow test and a lumbar puncture.

“I actually dropped my handicap from 4 to 1 while I was in treatment,” Lyle boasted.

That singular devotion was nurtured even more when Lyle’s idol, four-time PGA Tour winner Robert Allenby, visited him in the hospital. When Allenby, who had been an ambassador for the Challenge support network for children with cancer, arrived unannounced, Lyle’s reaction was a priceless: “Oh shit.”

From that meeting a friendship was forged and Lyle’s drive was focused even more. Beating cancer was no longer the ultimate goal, replaced instead by a more profound desire to ultimately join Allenby on the PGA Tour. “Jarrod always had a good swing,” Allenby said. “But he had a mind that was the strongest part of his game and because of what he had gone through with the cancer, that enabled him to have a strength that could make him not just a good golfer but a great golfer.”

For nine months Sally Lyle’s daily message gave her son a reason to remain resolute, but it was the 17-year-old’s desire to continue down a suddenly clear path, an avenue that would ultimately lead him to the game’s grandest stage, that made each day worth fighting.

“His love of the game came out of that and every chance he got he was out here at the golf course playing and practicing,” John Lyle recalled.

Lyle wanted to win each day not for the sake of the victory, but for the chance to fulfill his dream of playing on Tour. It was a distinction and a direction that would ultimately define all the moments to come.