The Fighter, Part 3: Career and family take off, until … 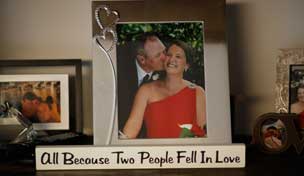 SHEPPARTON, Australia – Amid the chaos and controlled mayhem that is the 16th hole at TPC Scottsdale, John Lyle shouldered his way into the crowded grandstand that rings the 162-yard par 3 to watch another seminal moment in his son’s life.

“A guy sat down beside me and said, ‘Do you know him?’ And I said, ‘Yeah, I’m his dad,’” John Lyle recalled. When Jarrod Lyle’s 8-iron dropped into the hole for an ace, “It was like listening to a Grand Final in Melbourne. The roar was just amazing.”

While the largely inebriated masses that occupy the Birds Nest cheered Lyle’s hole-in-one at the 2011 Waste Management Phoenix Open, John Lyle’s mind raced back more than a decade to the moment his son was diagnosed with acute myeloid leukemia at 17.

Those dark days at the Royal Children’s Hospital in Melbourne seemed a lifetime away, visions of a frightened child replaced by a driven man with a singular focus.

Nine months of debilitating chemotherapy and radiation treatments had been endured largely because of Jarrod Lyle’s dogged determination that he would play on the PGA Tour.

“The only thing I thought about was being positive and playing golf again,” Lyle said.

By the time doctors declared Lyle cancer free in 2000 he was already on his way to the game’s grandest stage. A year later, at age 20, he was admitted to the prestigious Victorian Institute of Sport in Melbourne, an intense training program that helped produce some of Australia’s top players, including Geoff Ogilvy and Aaron Baddeley, and he turned professional in 2004. A year later he transcended the stereotype of a good-natured cancer survivor when he finished third at the Heineken Classic, a European Tour event played at Royal Melbourne.

“For him to go through what he did was amazing,” said Martin Joyce, who attended the VIS with Lyle and is now the director of the institute’s golf program. “It’s the type of personality he has. He doesn’t let too much get to him and just gets on with his own business.”

That no-nonsense personality – born, as with many cancer survivors, from his brush with mortality – helped steady him for what would turn out to be a less than meteoric climb to the PGA Tour.

In 2007 Lyle earned his first trip to the Tour via the Web.com Tour but struggled in his rookie season, missing the cut in almost half his starts and finishing 164th in earnings. He would spend the next four years bouncing between the secondary circuit and the Tour with regular stops at Q-School.

By the time he burst into the consciousness of the American golf fan with his raucous ace at TPC Scottsdale in 2011, he was mired in a familiar cycle of missed opportunities and missed cuts.

Throughout it all, however, Lyle’s history provided the benchmark of perspective: “The whole mindset side of things that I had while I was in the hospital of beating cancer and getting myself out there playing golf when I didn’t feel like playing golf,” he said.

“You hit some bad shots that didn’t seem that bad when you think back to where you’ve come from. You get this flashback of the 4-year-old kid that was there next to you in the hospital that was battling cancer the same time as you.”

After another successful trip through Q-School in 2011, Lyle began his fifth year on Tour with surprising consistency. He missed just one cut in his first five starts and closed with a 1-under 70 to tie for fourth at the Northern Trust Open, his best Tour finish in his 100th start.

Although it was early in the season, Lyle was 36th in earnings following the Northern Trust and he flew to Mexico for his next start with renewed optimism.

“It was just so nice to see someone smile from ear to ear,” said Robert Allenby, who befriended Lyle while he was undergoing treatment in 1999 and mentored him through his early years on Tour. “It didn’t matter what happened, you couldn’t take it off his face. He was just so happy to not only be playing a sport he loved but to do it professionally.” Three months before his tie for fourth in Los Angeles, Lyle had married a former schoolmate, Briony, in a surprise wedding in his hometown of Shepparton. The couple was expecting their first child in March, which was also a surprise considering that doctors had told Lyle he likely couldn’t have children because of the treatments he endured as a teenager.

In late February when Lyle arrived at the Mayakoba Golf Classic flush with confidence 2012 was shaping up to be the best year of his eventful life, with the convergence of a growing family and the competitive reality of a professional career that appeared to have reached a tipping point.

“Yeah, stop there,” Briony Lyle offered with a nervous smile. “If only we could.”