The Fighter, Part 5: A new beginning 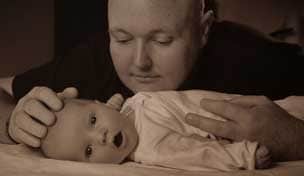 Getty Images
KUALA LUMPUR, MALAYSIA - OCTOBER 31: Kevin Na of the United States tees off on the 2nd hole during round three of the CIMB Classic at Kuala Lumpur Golf & Country Club on October 31, 2015 in Kuala Lumpur, Malaysia. (Photo by Stanley Chou/Getty Images)  -

SHEPPARTON, Australia – Two stinky bags of blood. That’s what this boiled down to. Well, that and love and hope and the pragmatic genius of a no-nonsense hematologist with a Diet Coke habit.

The medical mystery, or miracle, depending on one’s view, began with a pleading phone call from Briony Lyle in the panicked hours following news that her husband, Jarrod, had been diagnosed with acute myeloid leukemia for the second time in his relatively young life.

Initially doctors wanted Lyle to begin chemotherapy treatments immediately, but Briony, 8 ½ months pregnant with the couple’s first child, was committed to getting her husband to the birth, which would not have been possible after he began treatments because of the toxins caused by chemotherapy and the potential danger to the newborn.

“I’m just sitting there going, ‘Well, what am I supposed to do?’” Jarrod Lyle recalled. “I was torn between do I start my chemo or do I put my life at risk and go see the best thing that’s ever happened to me happen?”

Thanks to Jeff Szer, a renowned hematologist at Royal Melbourne Hospital, Lyle didn’t have to decide. After listening to Briony’s plea, Szer delayed Lyle’s treatments to allow him to attend the birth of Lusi Joy on March 11, 2012, and promptly began the healing process 12 hours later.

In 1999, at the age of 17, Lyle had survived his first bout with leukemia, and because of the rigors endured by his body during that first engagement with the disease the only treatment option available for the 30-year-old was a stem-cell, or bone-marrow, transplant. The odds were not in his favor.

“He didn’t want them (the survival rates following a relapse), but he got them,” Szer said. “But an old teacher of mine said statistics are irrelevant at the bedside. Everything is 50/50 – it either will happen or it won’t.” For the second time in his life Lyle was subjected to debilitating chemotherapy treatments. All told, it took two rounds of chemo and an additional treatment of radiation to rid his body of the cancer, which was required before he could receive his stem-cell transplant.

That pain, however, was trivial compared with his inability to hold Lusi.

“I would sit there during the day while I was having chemotherapy and would just look at my phone for hours, just staring at the picture I had taken thinking to myself, ‘This little girl is going to save my life and she doesn’t know it,’ ” Lyle said.

During his initial bout with leukemia as a teenager it was golf, and the dream of someday playing the PGA Tour, that drove Lyle from one day to the next. During Round 2, however, the inspiration was much more visceral.

Being a father, more so than returning to the PGA Tour, drove him; but through the darkest hours the game still called.

From Room 7 in the Bone Marrow Transplant Ward at Royal Melbourne Hospital, a nondescript enclave with an unobstructed view of an alley and a single chair for visitors, Lyle stayed connected to the game as best he could. He’d brought three putters to the hospital and an 8-foot putting mat. “I made 22 8-footers in a row one day and that was the record,” he smiled. Throughout his treatment, however, it was Lusi who gave him the daily inspiration to soldier on, to fixate on the outcome and not the painful treatments and the uncertainty of the stem-cell transplant.

“Lusi was like a little shining star in the room,” said Kath White, the nurse unit manager of the transplant ward. “Jarrod was very much alight when Lusi was here.”

For Briony, essentially a single mother whose life had been uprooted by Lyle’s diagnoses and transplanted to a small apartment a block from the hospital, the progress was measured in the simplest terms and the very sobering reality of living from blood test to blood test.

At one point during treatment, a group of Lyle’s friends and fellow Tour players, including childhood hero Robert Allenby, offered to hold a tournament in memory of Lyle if the treatments failed, but she never allowed herself to succumb to the doubts.

“They wanted to know the answer without actually asking it blatantly, ‘Is he going to die?’ ” she recalled.

But the cancer finally receded and Lyle was put on the clock for a stem-cell transplant. Because of his size, 6-foot-2, 230 pounds, and the fact they could not find an adult donor who was a proper match, Lyle needed umbilical-cord blood from two donors to provide enough stem cells. Matches were found from two infant girls, one from the United States and the other from Germany.

Scientifically, it took 18 units of red blood cells and 102 platelets to complete the transfusion. But to the untrained eye it was difficult to comprehend how two bags of blood could save Lyle’s life.

“They were just hanging there, these bags of red blood and in it goes and it stank,” Briony remembered. “It was really smelly and he stank for a few days afterwards.”

Thirty days after Lyle received the transplant, doctors informed him that he was “100 percent donor,” transformed medically, DNA and all, into a cancer-free survivor thanks to the stem cells from the German infant.

“Whoever that little girl is in Germany, thank you,” Lyle said. “I think that’s where my love of beer has been rekindled.”

The call every cancer patient awaits came late, in May 2013. Szer was supposed to update Lyle on the most recent round of tests promptly at 5 p.m. An hour later, Lyle had become panicked and decided he couldn’t wait anymore. He called his doctor.

“He goes, ‘You’re cancer free.’ I just hung the phone up and burst into tears because I was so happy to hear that nothing nasty was in my body anymore,” Lyle said through a wave of emotion. “That was the first time that Lusi had seen me cry and I guess she could understand what I was feeling and she ran across the bedroom and picked up her little monkey and gave me the monkey.”

There were still treatments to endure and an ongoing round of graft-versus-host disease, a complication that Szer explains is normal in stem-cell transplants and easily treatable. But the Lyles slowly settled into a new house in Torquay, about an hour west of Melbourne along the Bass Strait, with a new lease on life. In his signature practical style, Szer conceded that the chances of survival if there were to be another relapse “are very small.” But he estimates the odds of that happening more than a year after a transplant are minimal.

On June 8, 2013, a year after receiving the bone-marrow transplant that rid his body of leukemia, the Lyles gathered to celebrate a birthday complete with all the trimmings from a tricycle to a Superman onesie. With the aid of modern science and an unknown German infant, Jarrod Lyle had just turned 1 year old.

“That’s the day he got his life back,” said Briony, who had the date of Lyle’s transplant and his initials, JBL, tattooed on her left wrist. “He was essentially starting over.”