The Fighter, Part 6: Health, family and golf on Lyle’s side 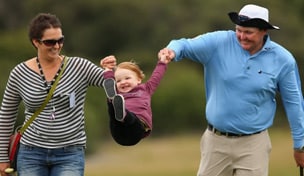 Getty Images
<a href='https://www.instagram.com/p/9yMeSLJpd0/?taken-by=paulacreamer1' target='_blank'>@paulacreamer1</a>: Absolutely love my nails by @maya_tempaku Thank you so much!!! How awesome is my hand painted pink panther?!?!? 100% had to do the camo for all the men and women in the service! I mean rhinestones are a must and of course the ribbon! Pretty happy about this collaboration!!! #girlygirl #tomboy #happygirl  -

Before teeing off for his first competitive round in nearly two years at the 2013 Australian Masters, Lyle acknowledged that he didn’t really know what to expect since beating leukemia for the second time.

“You get out there and you hit shots that you’ve never hit before and you sort of think to yourself, ‘I don’t know where that one came from, and I don’t like it,’” Lyle said before the Australian Masters. “You know I’ve hit a few hosels out of bounds and got myself into a bit of trouble, but you know it’s all part and parcel of coming back.”

From those lowered expectations came an opening-round 72 at Royal Melbourne, followed by a relatively stress-free 71 and then a Saturday 70 to head into the final round tied for 29th place. Although he struggled on Sunday (79) and tied for 57th, his enthusiasm was not dampened.

“I couldn’t be happier,” Lyle said. “I’m just loving the whole opportunity and looking forward to playing for the first time in a long time.”

With the ultimate goal a return to the PGA Tour, where he was beginning his fifth full season in 2012 when he was diagnosed for the second time with leukemia, Lyle continued his comeback at this week’s Victorian Open.

When Lyle does return to the Tour, his fellow competitors may not recognize him. The chemotherapy and radiation treatments he endured in his second bout with cancer caused a significant weight loss. For the first time in his career he has started to split time between the gym and practice tee.

The swing, however, will be the same.

Following his successful bone-marrow transplant in 2012 and his decision to return to competitive golf, Lyle reunited with his former swing coach Sandy Jamieson, who met the Australian while he was attending the Victorian Institute of Sport and worked with him earlier in his career.

“I felt we had unfinished business, and at times our relationship when I was coaching him there was a fantastic relationship,” Jamieson said. “So the chance to sort of rekindle that was probably one of the most exciting things professionally that has happened to me.”

Lyle’s initial competitive concern was a predictable lack of length off the tee. In 2010 he ranked 23rd in driving distance on Tour. At the Australian Masters he said his lack of power and stamina was his biggest concern.

“When we started working together it was in the middle of the winter and Jarrod was worried that he had lost all of his distance,” Jamieson said. “But the thing is with golf pros, they follow the sun, and he hadn’t had a winter hitting golf balls for probably 10 years,”

While the broad brush strokes of Lyle’s comeback are set, with the ultimate goal a competitive return to the PGA Tour, the specifics remain a moving target.

Lyle will have 20 events under his major medical exemption to earn $283,825, which combined with his earnings before he was diagnosed with leukemia would match No. 125 on the 2012 money list. According to his manager, Tony Bouffler, the plan is for Lyle to return to America in August to play three “rehab” starts on the Web.com Tour. He is allowed a total of five rehab starts, and the Australian Masters and Victorian Open count against that total. Then Lyle hopes to pick up his PGA Tour career in October at the start of the 2014-15 season, depending on which events he’s able to get into.

All that, however, is contingent on his continued recovery and his game.

“There’s things that I still need to keep a close eye on health-wise, and the doctors are probably a little reluctant to let me travel too far away, so it’s not worth me trying to get back too early,” Lyle said. “I don’t want to go over there and waste my medical (exemption) by coming over too early and not being prepared enough to play.” What is not unclear is his drive to play the Tour again. His finish at the Australian Masters may have fueled his confidence, but not his desire. That was always there.