Nelson passed over, yet again, for Ryder captain 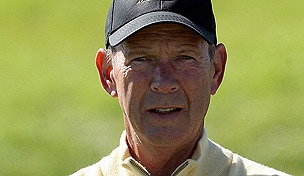 Getty Images
SINGAPORE - MARCH 08: Lorena Ochoa of Mexico waits on the sixth tee during the final round of the HSBC Women's Champions at the Tanah Merah Country Club on March 8, 2009 in Singapore (Photo by Scott Halleran/Getty Images)  -

ORLANDO, Fla. – This isn’t about long overdue mulligans or shattering the status quo or even phone calls that were never made. When you’ve lived 65 full years, validation is in the eye of the beholder and for Larry Nelson, three major championships and a loving family provide all the validation one could ask for.

But as Nelson finished his breakfast on a dreary central Florida morning on Wednesday there was no hiding the hurt.

“If they had made a decision a little earlier and let me know. If they had just called us and said, ‘We’re going another direction,’ I’d have been fine. I’m fine anyway,” Nelson said in his signature soft-spoken southern drawl. “The way it’s come down and to have someone say that they did contact me when they didn’t, that didn’t make sense.”

That “someone” was PGA of America president Ted Bishop, who was asked by XM Radio’s Matt Adams on Wednesday’s “Fairways of Life” show to comment on reports that he hadn’t contacted David Toms or Nelson about the 2014 U.S. Ryder Cup captain’s vacancy.

“The statement you just made is not true,” Bishop said flatly but later clarified his comments to GolfChannel.com and did talk with Nelson Wednesday afternoon.

In fact, Nelson couldn’t recall ever getting a call from PGA HQ even after he won his two PGA Championships. But then the man who led a U.S. Army “A-team” during the Tet Offensive in Vietnam doesn’t really have much interest in protocol or perceived slights.

Nelson is quick to point out that Tom Watson, who will be named the ’14 U.S. Ryder Cup captain on Thursday in New York according to various reports, will be an extraordinary leader with an impeccable record. Like most of the golf world, however, he just doesn’t understand the process.

“There are a lot of people who have been Ryder Cup captains with less credentials and some that have been chosen with more credentials,” Nelson said. “It’s not that you sit back and say that you should have been. I think there are plenty of guys that should have been (captain) but have not. It’s just a little bit of a crying shame when you pick someone to do it twice when there are a lot of people out there who haven’t done it once that deserve it.”

Nelson would never call it a slight, that kind of self-indulgent sentiment is not in his DNA, but the oversight dates back to late 1993 when, according to Nelson, Lanny Wadkins suggested that he should captain the 1995 team at Oak Hill in New York and Nelson would then take his turn in 1997 against the late Seve Ballesteros in Spain.

“That to me was a done deal,” Nelson said. “I assumed everyone would be good to their word and I would captain in ’97.”

For the record, Nelson didn’t receive a phone call when the PGA bypassed him in ’97 and picked Tom Kite either.

“It’s amazing through all this I’ve never gotten a call,” he said. “I don’t understand it. It’s not sour grapes, I’m just flabbergasted.”

That the PGA of America seems poised to break from the traditional mold for captains is something of a competitive necessity given the U.S. side’s 2-for-9 record in the last 11 matches. That they would go back to the well and name Watson, the last U.S. captain to win a match in Europe, also dovetails with what Bishop said this week, “we’ve done something a little bit different this year.”

What is surprising is that Nelson was apparently never considered, at least not to the point that it warranted a phone call.

In late 2008, in the wake of the U.S. victory at Valhalla, your scribe cornered a PGA official and asked if the organization would consider giving Paul Azinger, whose “pod” system and proactive style wrested the Americans off of a three-match losing streak, a second term.

“We have more qualified potential captains then we do available spots,” was the official’s response.

And yet here we are on the verge of naming the first second-term captain in the modern era and another snub, and not just for Nelson but for a host of viable candidates.

“There are people – Hale Irwin, Mark O’Meara – who have not been named captain that deserved it,” Nelson said. “Watson would be a great captain. I have no problem with that. It is an honor. It is a selection. It’s not earned. But I just don’t understand the selection.”

In a moment of awkward clarity we asked Nelson, who has a 9-3-1 record in three Ryder Cup starts, what he would have said had the PGA of America called him and asked what kind of captain he would be for the ’14 matches in Scotland?

“There is a level of desire to use the talent the way it’s supposed to be used. I’m talking about the 12 guys that are on the team,” he said. “Being able to prepare them for the team matches and the individual matches, that’s important and I think I’d have been able to do it.

“When you go overseas you’re kind of in your own little group. It’s kind of like going to a warzone, basically.”

With that Nelson – who is likely the last chance the PGA of America had to name a man who has actually led troops into harm’s way a captain for their faux Ryder Cup battle – set out for a practice round at this week’s PNC Father/Son Challenge with, of all things, his cell phone gripped tightly in his right hand. Waiting, it seems, for a phone call that is two decades overdue.