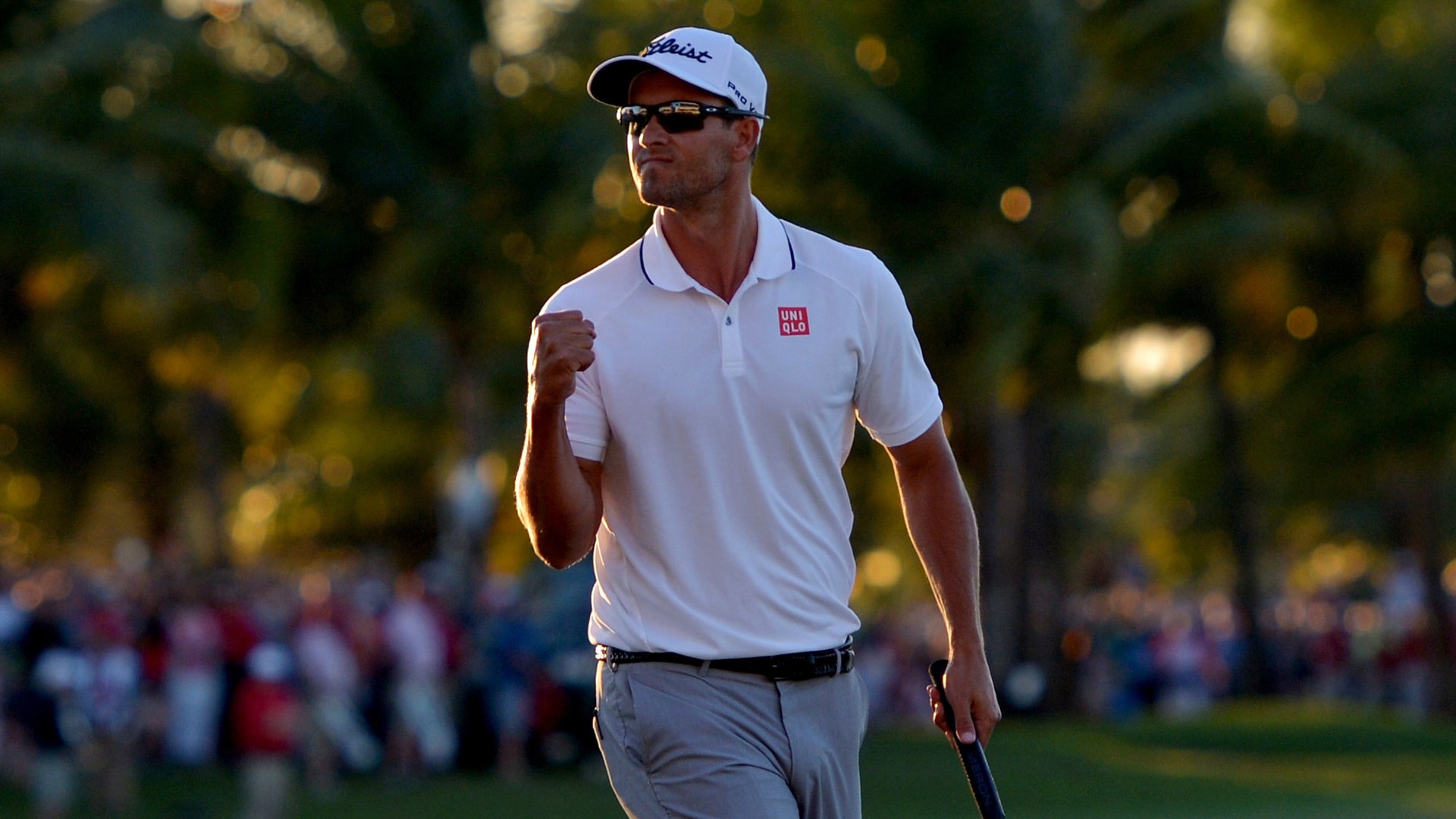 DORAL, Fla. – He doesn’t have the firepower to hang with Rory McIlroy, the touch to survive the ban on anchored putting or the moxie to overcome not one but two balls in the water on Sunday at the WGC-Cadillac Championship.

That would normally be the line on Adam Scott, but on a day when Donald Trump threatened to steal the spotlight at Doral, the Australian showed the Teflon tenacity of a politician on his way to his second win in as many weeks.

Forget everything you thought you knew about Adam Scott.

The reimagined 35-year-old version didn’t succumb to a pair of early double bogeys on Sunday that included two water balls – hit, rinse, repeat – a cold shank from a bunker on 16 and even a cameo by the Republican presidential candidate. Scott became the first player since Billy Horschel in 2014 to win back-to-back events on the PGA Tour.

“I don't think I've processed what's happened, especially today's round," Scott said. "It was ugly and good, all in 18 holes."

Scott started the final round three strokes behind Rory McIlroy, but he held on for a one-stroke victory over Bubba Watson.

A player that once was considered too nice to win this type of slugfest showed a grit that hadn’t been seen since he survived extra holes to win the 2013 Masters.

This time there was no, “Aussie, Aussie, Aussie,” exclamation on the final green, just a grinding performance on the kind of gusty day in south Florida that makes his closing 3-under 69 something more than the sum of its parts.

A week after winning the Honda Classic with a quadruple bogey-7 on his card (on Saturday), Scott faded quickly on Sunday with double bogeys at the third and fifth holes, both the product of errant shots that found the water.

Walking off the fifth green, Scott was six strokes back and largely an afterthought to the larger narrative.

“I told him, ‘We gave four [strokes] to them last week and still won.’ I said, ‘Come on we can still do this,’” said Scott’s caddie David Clark as the two headed to the sixth tee. “We knew how tough the back nine could be.”

Slowly, Scott climbed back with birdies at Nos. 6 and 8, before adding three consecutive birdies starting at the 10th hole.

With his 5-footer for birdie at the 12th hole Scott moved to 11 under and tied for lead with McIlroy and Danny Willett. From six shots back to a share of the lead in just seven holes – only at Doral.

As Clark predicted, the Blue Monster’s closing loop proved to be particularly destructive for the world-class field assembled for the year’s first World Golf Championship.

McIlroy, who failed to convert a 54-hole outright lead for just the third time in his Tour career, bogeyed the 13th hole to drop two shots back and managed his first, and only, birdie of the day at the 16th hole.

It was far too little, far too late.

“I didn't make enough birdies,” said McIlroy, who was vying to become just the third player since World War II to win a dozen times on Tour before his 27th birthday. “I felt like my game was OK for the most part. I didn't take advantage of the holes I should have. I couldn't birdie any of the par 5s and that's really what killed me today.”

Phil Mickelson, whose reworked swing has led to one of the most productive springs in years for a player who some consider to be in the twilight of his career, bogeyed the par-5 10th hole after finding the water with his tee shot and made a mess of the 18th hole for a closing 70 and his third top-5 finish this year.

Danny Willett, an Englishman who has all the makings of a breakout Ryder Cup star, failed to convert a 10 footer for birdie at the 17th and bogeyed the last to finish tied for third with McIlroy.

But it was Watson who had the best chance to catch Scott.

The self-described “head case” birdied No. 17 to pull within one stroke of Scott, but at the demanding closing frame the voices in his head won.

“I had to back away and get the right thought patterns [on No. 18], and it worked out on that tee shot,” said Watson, who found the fairway at the last but couldn’t manage a birdie and finished alone in second place at 11 under par.

No one would call Scott’s victory pretty. In fact, equal parts “ugly and good” just about sum up his 13th Tour victory.

Scott was in contention for the third consecutive week, and he admitted to being fatigued on the weekend at Doral, where he shot rounds of 73-69. Even after charging back into the hunt there were still moments of uncertainty, like at the 16th hole where he tried to be too creative with a bunker shot from behind the green and shanked his next shot.

“I was so embarrassed to do that playing with Phil Mickelson,” Scott said. “I mean, he would be lipping it out or holing it, and I'm shanking it nearly into the next bunker. It shocked me a bit.”

Scott recovered, however, holing a 5 footer for par to maintain his advantage. But he needed even more magic at the demanding closing hole after his drive sailed into the right rough, about 4 feet behind a palm tree.

From 186 yards, Scott attempted to cut a 6-iron onto the green, but his approach caught the bank and rolled to within 4 feet of another water hazard.

“When you win after something like that, that's winner's luck, really,” said Scott, who chipped to 7 feet and converted the winning putt. “Those things even out over a long period of time where at some point, I would have hit that shot and it would bounce back in and you don't win, and other times it stays up and you do. To take advantage of it feels really good.”

There is certainly a degree of luck involved in any win, but there was nothing lucky about Scott’s victory at Doral.

After three impressive weeks that included two wins and a runner-up showing in Los Angeles, consider this Scott’s mandate for toughness.