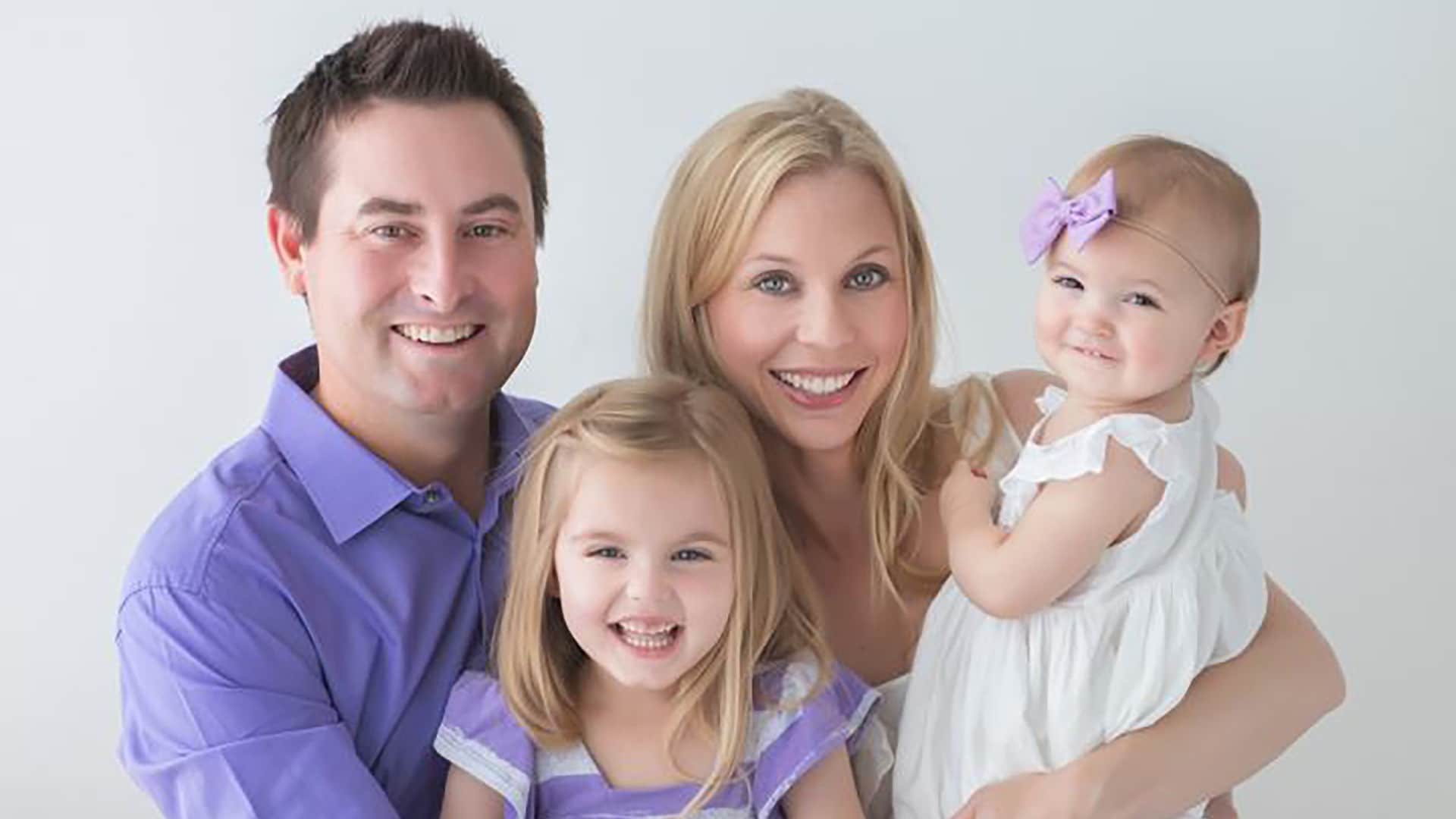 SMU’s season resumes next week, and head coach Jason Enloe has more on his mind than qualifying scores and travel arrangements.

After each round at the Golf Club of Houston, he will drive to a downtown hotel to see his wife, Katie, who is staying 10 minutes from MD Anderson Cancer Center, where she is now being treated for acute myeloid leukemia.

Best-case scenario, Katie will be there for the next seven to nine months. The doctors aren’t saying much. They’re optimistic they can beat this aggressive form of cancer – the same type that former PGA Tour player Jarrod Lyle is battling, for the third time – but they’ve promised nothing, other than a long and difficult road ahead.

“Just a complete shock to our systems,” Enloe said by phone recently. “We didn’t even have time to process it. It was just like, 'Holy s---, is this even real? When are we going to wake up from this bad dream?'”

It has all unfolded so quickly. About a month ago, during a routine self-exam, Katie, 35, discovered a lump in her breast that was firmer and bigger than any she’d felt in the past. Specialists in Dallas couldn’t pinpoint the problem. The Enloes braced for a breast-cancer diagnosis, but more tests revealed the blood cancer. With an assist from Amy Mickelson, Katie was quickly admitted to MD Anderson, the nation’s top-ranked cancer hospital, where she’ll receive treatment through at least August.

“We’ve settled in for a long, arduous journey,” Enloe said.

Last week, Katie endured five rounds of chemotherapy (with two or three more cycles to go). They spent the rest of the week in the hotel, watching movies and going for walks, ordering room service and sorting out their complicated short-term plans. She is feeling strong, and she’s in good spirits, but the Day 14 marker is approaching. That’s when most patients feel the chemo’s wrath, when their hair falls out in clumps and sores develop in their mouths.

The next step – a bone-marrow transplant – is the most critical. They need to find the perfect match. Doctors say they really only get one shot.

“It’d be nice to have a percentage, to know if you’ve got a good chance or a bad chance,” Enloe said, “but they haven’t really given us that kind of prognosis. So we’re betting on the doctors and modern medicine.”

Jason and Katie met through mutual friends in 2007, when he was still trying to carve out a career on the then-Nationwide Tour, and they married two years later. Two nights after their wedding, they went on a double date with Katie’s sister, Kandi, and one of Enloe’s pro golf buddies, Hunter Mahan. Those two hit it off immediately and married the following year.

“We’re a tight family,” Mahan said, breaking down over the phone, “and you just never know in life. This is what family is for, to support each other.”

And now the Enloes need that support more than ever.

When the family first received the diagnosis, the Mahans offered to bring the Enloes’ two young children – Emma, 5, and Maddie, 2 – on the road for two weeks. After stops in San Diego and Phoenix, and visits to Sea World and the PGA Tour Academy, the kids flew to Houston late last week to see their mom for the first time. Their stay didn’t even last 24 hours, after Katie began to feel ill.

“That was the worst part,” Enloe said, “seeing her tell them goodbye.”

He knows he can shield his kids from the truth for only so long. For now, he told them that Mommy is sick, and that her doctors are four hours away in Houston, and that the medicine will make her better, and that she’s going to be there for a while. Emma is already starting to ask more difficult questions.

“I don’t want them to be affected by this too much,” he said. “Hopefully we’ll be able to look in the rearview mirror and say, ‘Mommy was sick for a little bit,’ and we don’t think much of it.”

At home in Dallas, Enloe is in his fourth year running the men’s program at SMU, with responsibilities to his players and their parents, his recruits and his bosses. Everyone is planning to support Katie’s battle this spring with "TOGETHER WE STAND" bracelets, with ribbons or patches on their shirts and hats. He hopes his players are inspired.

So far Enloe has skipped a few weekday practices but never qualifying rounds. Last weekend, he addressed the team for the first time, providing an update on his wife’s health and offering some perspective, about how they should never take the women in their life for granted. “That role, being a mom,” he said, “is way harder than being the CEO of any major company.”

Because of his hectic, 24/7 job, he had no choice but to hire a nanny to help out on weekdays and when the Mustangs are on the road. In Houston, Katie’s mom, Debbie, has moved in, and a close friend visits often, bringing food and helping with laundry. With hotel expenses piling up, they’re looking into renting a corporate apartment, something more comfortable with more space for their extended stay. The Mahans recently started a YouCaring page for the family, and since it went live, more than 270 donors have raised nearly $75,000. (You can help here.)

“It’s crazy to fathom, and until it happens to you, it feels very far away,” Mahan said. “We don’t know what’s around the next corner, but we’re trying to alleviate any unnecessary stress.”

Still, Enloe can’t help but feel overwhelmed. All of Katie’s responsibilities around the house are now his. Even a simple task like paying the bills was eye-opening. “I didn’t even know where the checkbook was,” he said. “It’s stuff I haven’t had to worry about in the longest time.”

And taking solo care of his two kids … well, that was an adjustment, too. His first night alone with them, the youngest got sick and didn’t fall asleep until 10:30 p.m.; the oldest helped and was up even later. “It was a s---show,” Enloe said. But he knows that Katie is counting on him, and that he has to be the “lead dog,” and that this is their new normal for the next several months.

“I’ll probably fail miserably,” he said, “but it won’t be from a lack of trying.”

This week, he is settling into a new routine. On Mondays and Wednesdays, after practice, he shuttles the girls to ballet class. He’s going to be a dance dad for a while, and that’s fitting – his kids have taken after Katie and Kandi, who were cheerleaders during the glory years of the Permian High School football team, the group made famous in “Friday Night Lights”. Every so often he checks in with Katie through texts and calls, but the conversations aren’t long. She needs to rest, and to stay positive, and that’s hard when so many emotions are involved.

“I’m scared to death,” he said. “I’m more scared about this than anything I’ve gone through golf-wise or personally, just because I have kids. They’re counting on me, and they usually count on mom. I just don’t want to screw it up.”

At night, when SMU practice and dance class and dinner is over, when the girls are bathed and tucked into bed, his mind wanders in so many directions, into dark and scary places, but he tries not to linger there long. There’s too much to do. He’s taking it hour by hour, day by day, trusting the doctors and praying for good news, for his family of four to be together again soon. 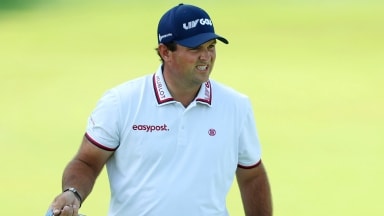 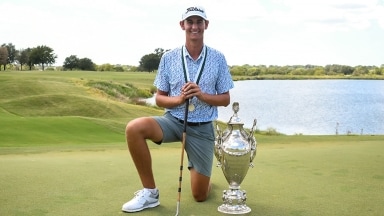 SMU senior McClure Meissner, coming off a huge victory at the Southern Amateur, has cemented himself as one of the top amateurs in the game. 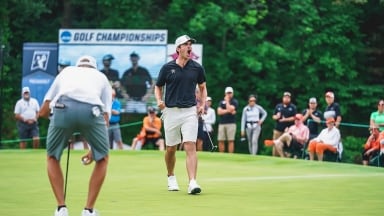