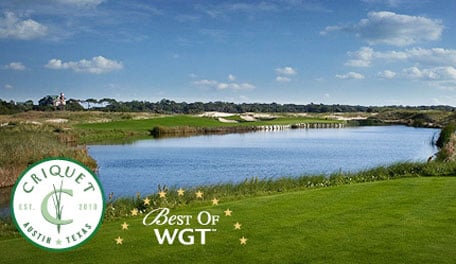 Dansamcam won the Tour Legend tier of the Criquet Cup to secure his fourth victory of the 2014 WGT Virtual Tour season.

Every month on the WGT Virtual Tour, Round 1 allows players to post their best score, and there were many new names on the Round 1 leaderboards this month. However Round 2 is a more stressful single-play round, and that's where dansamcam stood out, shooting 38 and 38 for a combined score of 76, besting other top Tour Legends AllyKennedy (38-41=79) and Spammage (39-41=80).

There were also great scores in the Legend tier on the challenging par-3 composite course, with hotho shooting 77 to win by two shots over RoarEMackElroy and Atlas3804 and finish three shots clear of sub50, donsprintr and AlbertoBQ.

The top players in each tier all earned a portion of the tournament's purse of 200,000 WGT credits. Winners in other tiers included HuskerJackie (Tour Master, 82), PhilMcIlroyson (Master, 83), MarkWaggs (Tour Pro, 92) and demondeacons666 (Pro, 89). Click here to view full leaderboards from the Criquet Cup.

In the Tour Legend tier, while frenchconnect has the season's lone major from the GolfNow Championship, he trails four-time winner dansamcam, who leads the overall 2014 standings with 39,000 credits. LyonWoulds is in second with 34,000, followed by frenchconnect (27,000), CptWomp (24,000) and poldmaier (16,000). With three majors still to be played, the season-long race remains up for grabs.

Click here for updated leaderboards on the season-long standings across all the tiers. Remember, the top 64 players in the season-long standings from each tier will qualify to play in the Virtual Tour Championship in December. With a record one million WGT credit purse on the line at the year's final event, players should monitor the season standings every month, and be sure to play in every event, especially the majors, like the Transamerica Championship at Olympic Club this month.