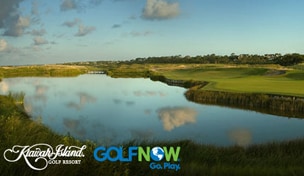 Thanks to a final-round 54, FrenchConnect took home the title at the GolfNow Championship, the first major of the 2014 season on the WGT Virtual Tour.

With a two-round, stroke-play total of 109 at Kiawah Island's Ocean Course, the four-year WGT veteran won the Tour Legend division by a single shot, outlasting five other competitors: Mannyankees, fmagnets, jmoney2224, CptWomp and xXxjasonxXx, who each shot a 110.

As the calendar now flips to April, play is open for the month-long Glenmorangie Cup. In this event, players will battle a collection of some of golf's most historic holes - from the 18th at St. Andrews to the closing hole at Bethpage Black - in a 36-hole, stroke-play competition. Players have an unlimited number of attempts until April 25 to card their lowest opening-round score, but will only get one shot from April 26-30 to record a second-round total.

Click here for more information on the WGT Virtual Tour, or to take your shot at the Glenmorangie Cup!