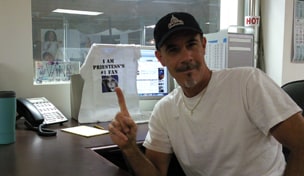 Getty Images
"This is the dumbest hole I’ve ever played in my life." - after making a double bogey on the par-4 18th on Friday  -

This past month, more than 75,000 virtual golfers participated in the IOA Open at Pebble Beach, the first tournament of the 2014 WGT Virtual Tour season.

Out of that large pool of contenders, no one finished better than dansamcam.

A WGT veteran who has been playing virtual golf for more than four years, dansamcam led the Tour Legend division after the first round and then held on for the victory in Round 2, posting a nine-hole total of 35.1 feet during the second round of the closest-to-the-pin event. His cumulative total of 60.7 left him more than 12 feet ahead of the second-place finisher in his division.

"I made sure I had every variable written down before I played," he said of his preparation for the final round. "Then it became just a matter of controlling my nerves and executing the shot."

While some players may fire up a computer and head immediately to the first tee box, dansamcam prides himself on his thorough preparation and credits his knowledge of the various elements as a key reason for his success. When he's not making a living as a graphic artist, the 50-year-old practices his virtual craft 5 to 6 days per week, usually for 1 to 3 hours per day.

"I take notes on the actual distance to the hole and how different wind angles with different ball spins will affect your approach direction," he explained.

Hours logged on the WGT Virtual Tour aren't dansamcam's only experience with the game of golf - he's currently a 7 handicap who has been playing golf since the age of 12. When it came to clinching victory at Pebble Beach last month, though, he admits that the hardest shot was the last one he faced: an approach over water and sand to the iconic 18th green.

"If you don't land on the right spot or if you have the wrong spin on the ball, you will be 20 to 30 feet away from the pin easily," noted dansamcam, whose shot ended up within five feet of the hole.

Dansamcam will now look to make it two in a row by claiming the title at the Transamerica Classic this month, and admits that he was motivated to grab his share of the 200,000 WGT-credit purse during the first event of the season.

"I like all WGT tournament formats," he added. "But the bigger the prize, the more effort I will put into that tournament."

While novices may find it difficult to compete with his results, dansamcam does offer some tips for those new to the game and looking to improve.

"Take notes on how your clubs and ball combinations will react with different spins into elevations and different wind directions," he explained. "Be sure to optimize your computer regularly, relax and trust your peripheral vision."

Registration is still open for this month's tournament, the Transamerica Classic. Click here to get signed up or for more information on the WGT Virtual Tour.