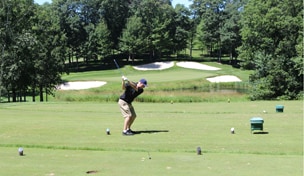 Getty Images
Danny Willett of England waits with his wife/caddie Nicole during the Par 3 Contest prior to the start of the 2015 Masters Tournament at Augusta National Golf Club on April 8, 2015 in Augusta, Georgia. (Photo by David Cannon/Getty Images)  -

While the Blue Course at Congressional Country Club has proven to be a stern test over the years for even the game's best, WGT veteran BolloxInBruges had no such issues last month en route to a runner-up finish at the Transamerica Classic.

A WGT member since 2009, he carded an 18-hole score of 54 in each of the two rounds of the stroke-play event, tying for first in the Tour Legend division before ultimately ceding the title to dansamcam via a scorecard tiebreaker.

A self-admitted "golf junkie," BolloxInBruges has more than 4.5 million WGT credits in career earnings and carries a single-digit handicap when the Minnesota weather allows him to venture out onto the golf course. He was originally enamored with the virtual renderings of world-class courses when he first started playing virtual golf, but the competitive nature of the game quickly grabbed him.

"When I was ascending the ranks as a player, I was driven to be the best," he explained via e-mail to GolfChannel.com. "Once I had a number of big tournament wins under my belt, the competitive drive decreased some, but the competitive aspect is still what keeps me coming back."

The 32-year-old doesn't play as much golf as he would like due to the shortened golf season in the Land of 10,000 Lakes, but still tries to play at least once a week during the summer. When surrounded by snow, though, he gets his golf fix through WGT events, although he doesn't play as much now as he did when he first became introduced to the game.

"At one point I was playing an absurd amount ... 40+ hours per week was the norm for me in the early years," he said. "Over the past couple of years I've settled down to a more healthy level of play, averaging closer to 15 hours of play per week."

BolloxInBruges believes that putting has the biggest impact on scoring at WGT events, and he feels that players new to virtual golf can lower their scores by improving their mental approach and paying closer attention to errant shots.

"Too often players place blame on the random deviations that are a part of the game for their poor results on a particular shot or round," he said. "If a shot doesn't work out well, make a note of it and consider that there may be a more optimal way of playing the shot rather than getting worked up about it."

In terms of his performance at last month's event, BolloxInBruges viewed the approach to the home hole at Congressional as a key to carding a pair of low scores.

"The approach on the 18th is always the toughest shot on the course when you have a great round going," he added. "With it being typically 200-240 yards and significantly downhill into the green, a small mis-hit is going to really be magnified."

The WGT Virtual Tour's first major of 2014, the GolfNow Championship, is now open to players of all ability. Click here for more information or to get signed up before heading to the first tee box.