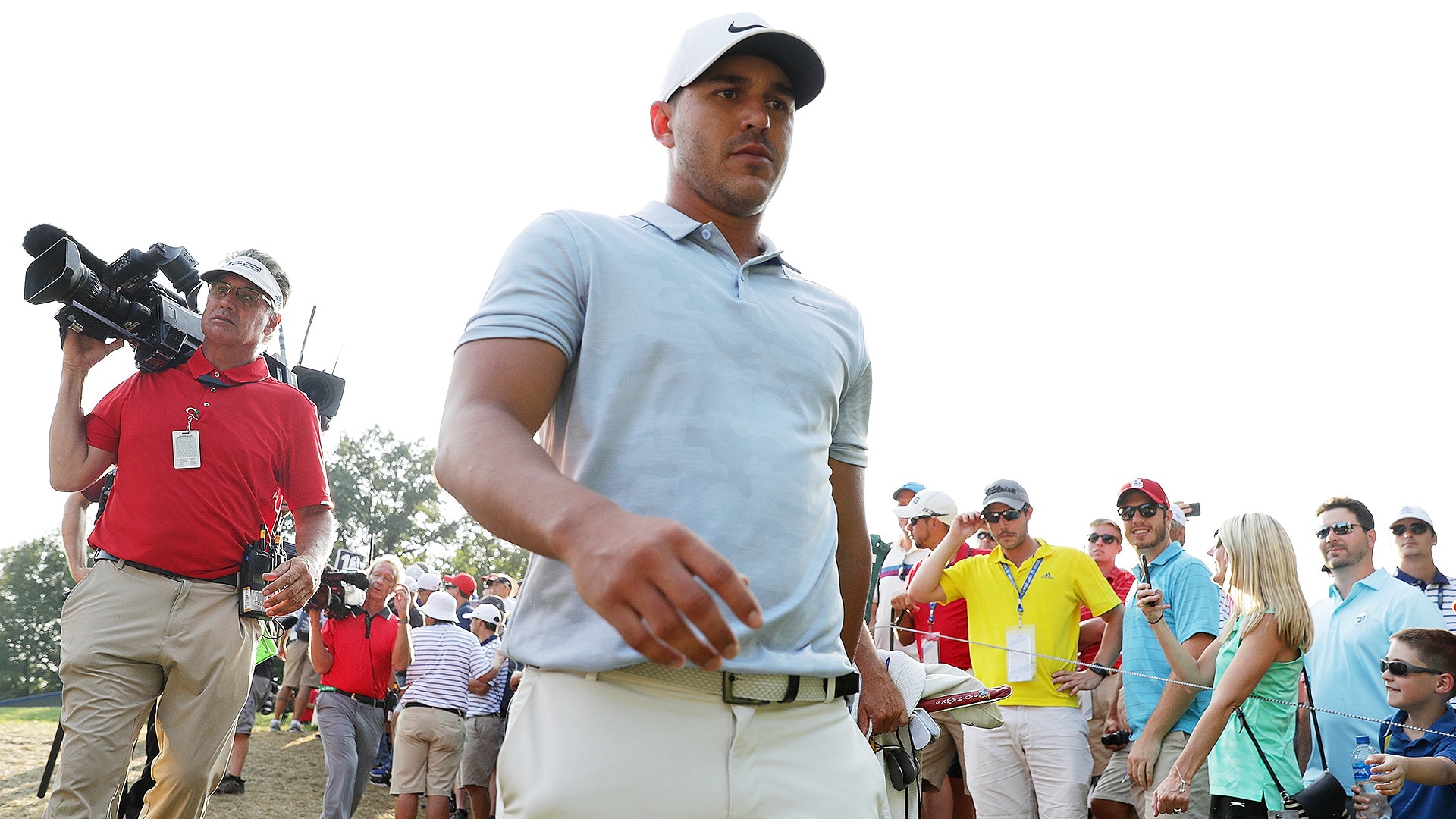 ST. LOUIS – The 100th PGA Championship turned out to be exactly what we all thought it would be, a heavyweight title bout masquerading as a toughest man competition.

With a heat index north of triple digits and the kind of humidity that makes the championship’s relocation to the more comfortable confines of May starting next year a welcome reprieve, the strongest have risen to the top.

With few exceptions, the bombers have emerged on a course that’s been soused to a spongy and one-dimensional test – see flag, hit flag. All of the other nuances of playing the year’s final major have been washed away by downpours on Tuesday and Friday.

What might not have been widely predicted, however, was Brooks Koepka’s dominance. He checked all the right boxes, had all the firepower Bellerive could ask for and a two-pack of majors to prove his pedigree; but with all the other power players perfectly aligned for what promised to be a long drive competition he blended into the crowd.

Despite his victory in June at the U.S. Open, and a major scorecard that includes five top-10 finishes in his last 10 Grand Slam starts, Koepka began the week with 20-to-1 odds, behind the likes of Dustin Johnson, Rory McIlroy and Justin Thomas. For all the wrong reasons, Koepka has been largely overlooked like vegetables on a buffet.

Whether it’s a byproduct of a personality that can at times come off as aloof, or his disinterest in the modern trappings of social media, in a game filled with stars Koepka is still searching for his place among the world-beater set.

Koepka uses that indifference, be it real or perceived, as fuel. It carried him through those lonely months of inactivity as he recovered from a left wrist injury and those far flung early days of his career when he chased his dream to the four corners of the globe on the European Challenge Tour.

“You always feel like you've got something to prove, whether it be to yourself or somebody else,” said Koepka, who will take a two-stroke lead into the final round following a third-round 66. “I can think of plenty of people along the way telling me I'll be nothing, working at McDonald's, doing things like that. The whole time, you're just trying to prove them wrong.”

The 28-year-old is 18 holes away from winning three of the last seven majors, not bad considering he missed one of those Grand Slam stops earlier this year when he was rehabbing a wrist injury during the Masters.

Put another way, he’s poised to prove that he’s arguably the best major championship player at the moment.

Koepka gave the field a glimmer of hope after moving to 13 under with back-to-back bogeys at Nos. 14 and 15, but he closed with a birdie at the 17th hole to set an impressive line.

“I can really tune in in the majors and I have no idea why,” he said. “They really get my attention. Every shot's so important out here, and you need to be able to play well.”

The consensus before this week’s PGA was that Bellerive would favor the long hitter and there’s nothing on the 54-hole leaderboard to suggest that won’t be the case.

“You can just have a quick look down the first page of the leaderboard and look who is there, it's great players and players in the best form this year,” marveled Scott, who shot a round-of-the-day 65 to move into second place.

Koepka, who would become just the fifth player to win his third major by 28, may have made it look easy on Saturday, but if history is any indication the game’s most relaxed player will have his hands full.

Rahm moved into the hunt for his first major with a 66 and is tied for third place at 9 under. On the check list of players who have the tools to turn Bellerive into a pitch-and-putt count the Spaniard atop the list, and like the other members of the cast he’s also not lacking in confidence.

The same could probably be said for Fowler, who is tied with Rahm after a third-round 69, and Day, the 2015 PGA champion who is another stroke back at 8 under and tied with Thomas, this week’s defending champion.

As for Woods, his new competitive reality has never been so clear. Although he said, and did, all the right things on a sweltering Saturday, moving to within four strokes with a 4-under 66, he’s in a similar position to where he was starting the final round at last month’s Open Championship.

The old Tiger would have maintained the pressure and waited for those ahead of him to blink, but as he learned at Carnoustie, where he tied for sixth, the current generation isn’t prone to Sunday swoons, at least not collectively.

If he’s going to win major No. 15 he’ll need to outplay a generation that’s only seen his greatness on YouTube, and that means he must be aggressive.

“I just have to make birdies. This golf course is stacked right now and everyone is bunched,” Woods said.

For the second time this season the game’s best will begin a Sunday at a major chasing Koepka, and Koepka will begin his day in the gym. The gym is his refuge, a place where he can go and get away from golf and expectations; just not the feeling that he’s overlooked among the game’s best.

“Everybody wanted a picture with Dustin,” Koepka smiled. “They were talking about him as we left and I was just standing there laughing. They were like, ‘Did you see that, No. 1 player in the world was here.’ It's like, yeah, OK.”

He won’t get to No. 1 in the world with a victory on Sunday, but he’ll certainly make a statement that will be impossible for anyone to ignore.