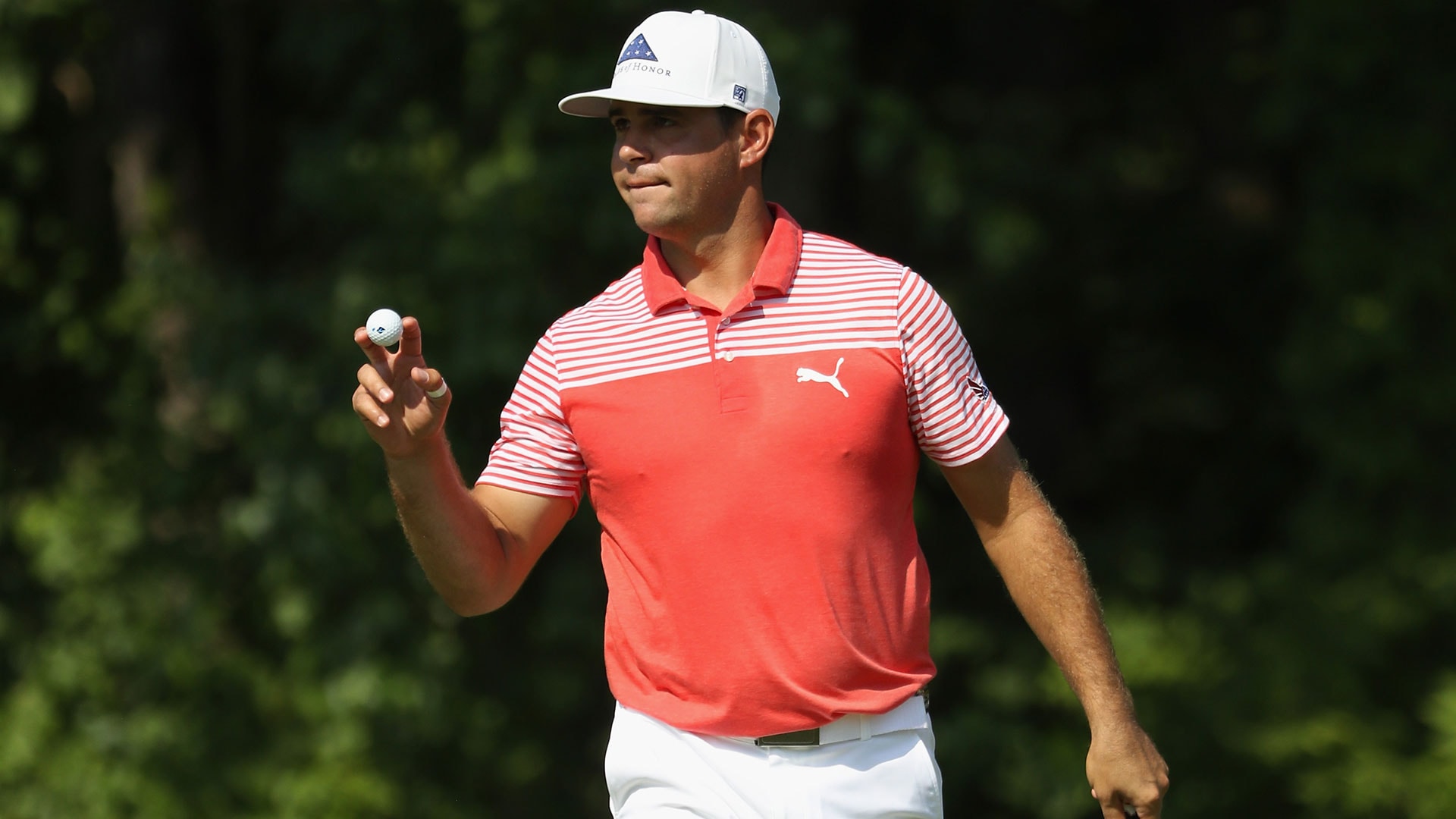 ST. LOUIS – The Border War ended in 2012 when the University of Missouri bolted the Big 12 Conference for the greener pastures of the Southeastern Conference, but that doesn’t mean that the lingering rivalry with Kansas has been forgotten or forgiven.

“I'm getting more ‘M-I-Z’s’ than I am ‘Rock Chalks,’ which is very rare. It's funny. It's nice,” smiled Woodland, who played golf at the University of Kansas following a brief detour at Washburn (Kan.) University where he played basketball.

The 100th PGA Championship is as close to a home game major as Gary Woodland will ever have, with Bellerive about a three-hour drive from where he grew up in Topeka, Kan., but the Kansas alum knows his precarious position among the Mizzou faithful.

“We're kind of in enemy territory down here in Missouri,” Woodland joked following a second-round 66.

But if the Border War still lingers for fans on both sides of the state line, the Midwest masses have pushed aside their differences to appreciate Woodland’s play for two days. The 34-year-old is the square-shouldered snapshot of Middle America, a family man who despite his success still calls Topeka home and still fits in perfectly with the region’s basketball passion.

He once set a record for three-pointers in a half while at Washburn – dropping five in what ended up being an Ichabods’ victory – and when he took the Round 1 lead at Bellerive the same day NBA All-Star Steph Curry opened with a 71 at a Web.com Tour event he gave the quintessential point guard answer, “Yeah, shoot it more,” Woodland laughed.

He’s endured injuries and tragedy to become one of the game’s most explosive and endearing players, two traits that are often mutually exclusive in sports. He’s also able to impress fans and fellow competitors equally.

“I don't think I ever played with Gary on the Hooter's Tour. He's probably older than me. He looks older than me anyway,” joked Kevin Kisner, who was paired with Woodland for Rounds 1 and 2 at Bellerive. “He probably already made it [to the PGA Tour] by then, if he didn't, he sucks, because he hit it 350 and didn't make it?”

But then the man who appears forged in a laboratory of titanium and competitive moxie has never been a part of the conversation at the game’s biggest events. In 27 major starts, Woodland doesn’t have a single top-10 finish and his week at last year’s PGA Championship - when he sandwiched rounds of 68-69 around a pair of 74s on his way to a tie for 22nd - didn’t give him much to build on.

“Majors it's frustrating,” Woodland acknowledged. “The record of mine, I think 12th is the best I've ever finished, which is frustrating because I feel like where I am and where I should be is not results that I have had.”

It doesn’t take a statistician to figure out why Woodland, who has all the ball-striking tools needed to compete at the highest level, hasn’t performed on the Grand Slam stage. He ranks fifth on Tour in strokes gained: off the tee, eighth in driving distance and fifth in greens regulation, but a pedestrian 99th in strokes gained: putting.

“The putting was kind of just the last piece of the puzzle. [Swing coach Butch Harmon] and I focused so hard this year on driving the golf ball because, when I drive it in play, I'm playing a game a lot of guys aren't playing out here, and that's a huge advantage,” Woodland said. “When I see putts go in, I'm a completely different player, especially with as aggressive as I'm playing right now.”

Woodland seemed to hit rock bottom at last month’s Open Championship when he finished his week with rounds of 33, 34 and 33 putts. At the urging of his manager Mark Steinberg, Woodland met with Phil Kenyon, a putting guru who works with many of the game’s best players.

The turnaround has been dramatic, with Woodland ranked sixth this week in strokes gained: putting following a 66 that left him alone in the lead with a PGA Championship record 10-under 130 total.

The way Woodland described his rags-to-rich transformation on Bellerive’s greens it was simply the byproduct of switching grips on his putter, although it’s likely Kenyon would have a more nuanced take.

“I just love how calm he is out there, he doesn't let anything get him too rattled,” Kisner said. “He's absolutely striping it and rolling the rock, so if he's going to keep that up we're going to have a pretty good battle if I can, too.”

Earlier this week Woodland explained that there were no Tour events for him to attend when he was growing up. In fact, his first Tour event was his rookie season when he teed it up at the Sony Open. It explains why the massive crowds this week at Bellerive have happily weathered oppressive heat and summer storms, and at least partially justifies the gallery’s response on Friday as Woodland completed his round to chants of “Rock Chalk.”

Even without the annual “Border War,” there are still hard feelings between the Jayhawk and Mizzou faithful, but fans from both sides can appreciate one of their own.