He didn't win, but Woods was the star of this show 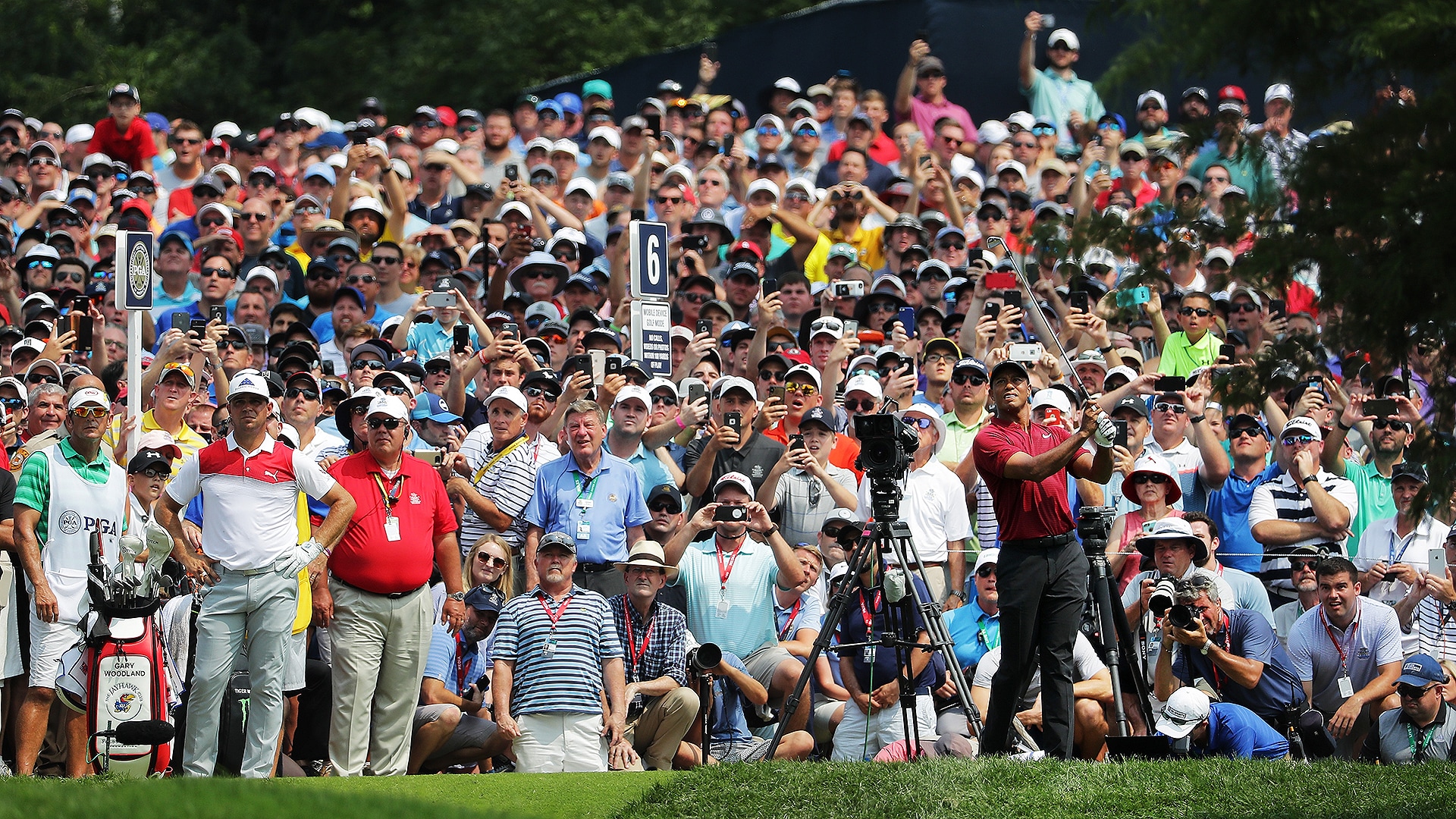 ST. LOUIS – He rolled into Bellerive on Sunday afternoon looking every bit the boss, black Nike hat pulled down backward and that legendary glare hidden behind a pair of wrap-around sunglasses.

The only thing missing was some metal band walk-up music and an obnoxiously loud announcer to send the muddy mosh pit into a frenzy, but then Tiger Woods added his own pyrotechnics to the proceedings.

The final tally will note that Tiger finished the 100th PGA Championship alone in second place, two strokes behind the game’s preeminent strongman Brooks Koepka, following a closing-round 64, but that sterile assessment ignores so much.

If fails, for example, to explain how Tiger didn’t hit a fairway through his first nine holes and yet made the turn at 3 under and just a stroke off the lead. Even Phil Mickelson would be impressed with that short-game sleight of hand.

That final line disregards how Woods gave himself his best chance to get back into the Grand Slam game in a decade with the type of gritty performance that had been missing from his body of work in recent years.

But most of all it ignores how Tiger in full flight produces an unparalleled jolt.

The 2018 PGA closes the book on 10 futile years in the majors, a contingency that seemed unthinkable when Tiger limped off Torrey Pines in 2008 after winning Grand Slam tilt No. 14. That it also turned up the volume on what could potentially be the most unprecedented comeback in sports history was just as evident.

Tiger followed a familiar script, igniting the crowd with birdies at Nos. 2 and 3 and after sending his drive at the ninth hole left into the Midwest multitude, a common theme on his opening loop, he played his second from the mud and mayhem to 10 feet and calmly rolled in the birdie putt.

Not bad for a guy who said he couldn’t find the range in his warm-up session.

“I was struggling with my golf swing,” Woods said. “I warmed up hitting it left, I was hitting it left with every single club, even my sand wedge I wasn't doing very good. So I knew this was going to be a struggle to try and piece together a round and I did.”

He would birdie four of six holes starting at the eighth to move into solo second place, just a shot away from the inconceivable. The Midwestern galleries crowded in 15 deep to cheer every putt and fist pump. This was like old times.

Even Tiger’s PGA Tour frat brothers gathered around televisions in Bellerive’s clubhouse to watch a moment many, perhaps even Tiger himself, thought would never happen.

When Tiger launched a towering approach shot at the 15th hole to a foot the roars could be heard across every corner of the property.

“Wow, what a shot,” marveled Kevin Na, who had delayed his trip to the airport to watch the finish.

When Tiger fanned his drive well right of the fairway two holes later, the groans were just a palpable. It was the beginning of the end for the sentimental favorite.

“Every major that I play I buy a flag and get it signed by the winner,” Na explained. “I was looking and thinking to myself if Tiger wins I have to buy an extra flag.”

He would par the par 5 and arrive at the 18th green three strokes behind Koepka to chants of “Let’s go, Tiger.” When his birdie putt from 19 feet dropped, Woods followed with a vicious fist pump and the crowd erupted.

“After playing with him yesterday that’s the most intense it’s ever felt and I’ve played with him a lot during that time [in his prime],” said Stewart Cink, who tied for fourth place. “After the round yesterday I commented it sounded like the old times, but the truth is it was more intense yesterday then I remember it being at any time.”

Throughout all of the heroics and histrionics, Koepka remained unfazed, some might even say indifferent to what on any other Sunday would have been a glorious exclamation point to a long-awaited comeback.

Sometimes you win the major and sometimes the major wins you - the former would be an accurate depiction of Koepka’s performance. He did Tiger better than Tiger on a sweltering Sunday, closing his week with a 66 for his third major victory in his last six Grand Slam starts.

If his U.S. Open victories were impressive, and they were, his PGA triumph was next level, a commanding performance with style points as he answered every challenge Tiger could throw his way. Many players have won majors, but few can say they did so with such easily identifiable audio clues coming from the group ahead.

“I couldn't hear it,” smiled Koepka, tongue firmly planted in cheek. “Everybody on the golf course heard it. It was actually quite funny. You could hear the roars when we were on 10 and 11, and then you could kind of hear it trickle down as they changed the leaderboards all the way through. You could hear a different roar like every 30 seconds.”

Tiger conceded that his tie for sixth last month at Carnoustie hurt, it was every bit the missed opportunity considering that at one point his name was atop the iconic bright yellow leaderboard on Sunday in Scotland.

The PGA was different.

If he’s being honest with himself, Tiger would have had to shoot 62 to even force overtime and even that probably wouldn’t have been enough considering Koepka’s mastery of a game that, however ironically, Tiger invented.

As has been the case throughout this comeback, there’s also some solace to be found in perspective. Asked if he could have imagined himself having a chance to win not one but two majors in 2018, Tiger deadpanned, “With what swing?”

“I didn't have a swing at the time. I had no speed,” he admitted. “My short game wasn't quite there yet. My putting was OK. But God, I hadn't played in two years. So it's been a hell of a process for sure.”

On Sunday at Bellerive, with all the fireworks and finesse that made him arguably the most compelling athlete of his generation, Tiger put on one hell of a show.