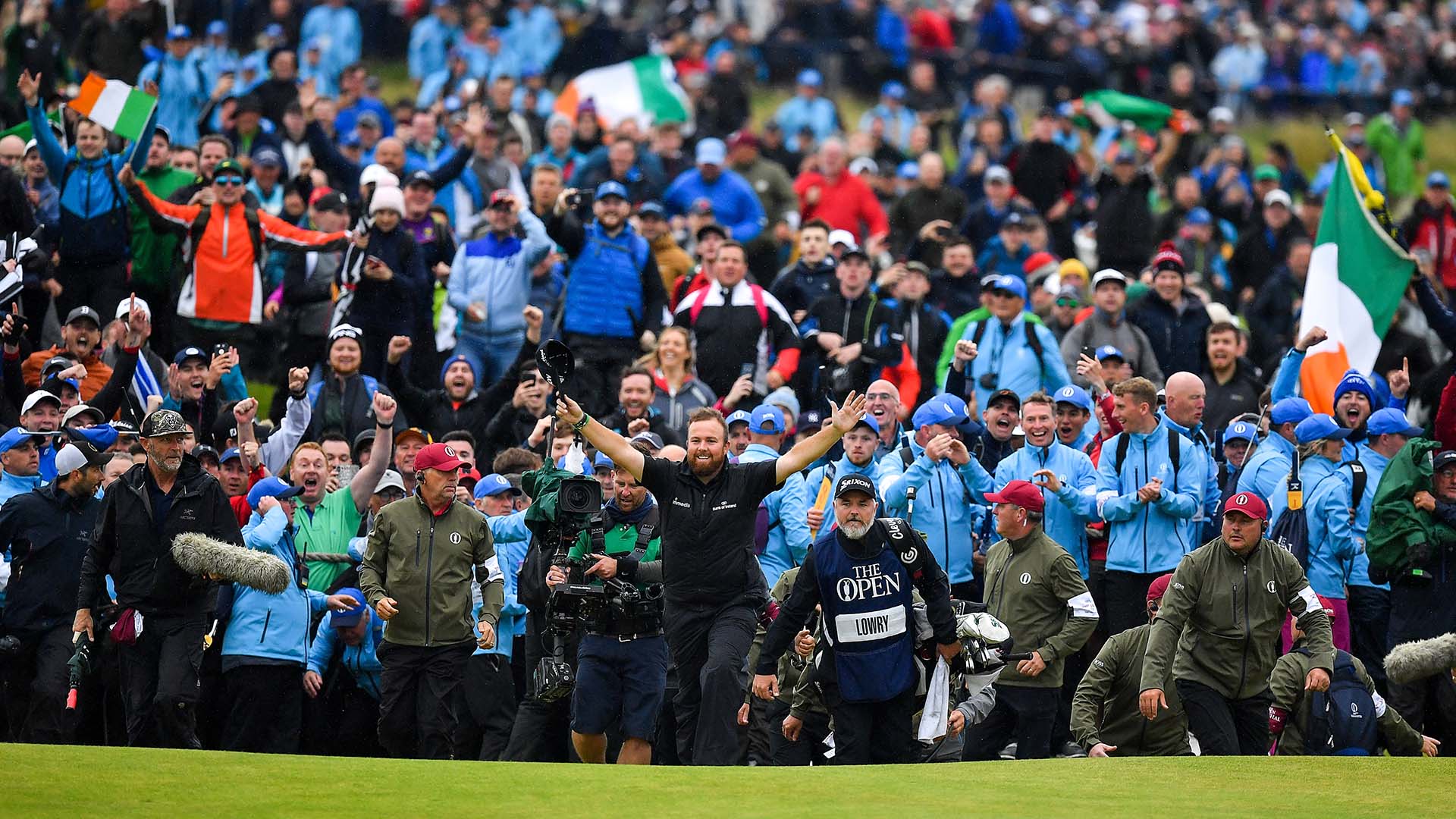 PORTRUSH, Northern Ireland – As a rule, cavemen tend to bottle things up. Stuff it down and bury it deep. The only good that can come from self-actualization is competitive paralysis. Only fools search for answers in the chambers of the human heart. For the Tier-1 professional, emotional safety is found in detached indifference, not needless sentimentality.

It’s what you do. It’s the requirements of the job. Scratch the surface too much and you probably won’t like the answer.

But this was different. This was truly an emotional Open and an outlet for the delicate soul.

Major championships have a tendency to bring things to the surface. It’s the byproduct of wanting something so much – even if the collective often opts to play whack-a-mole with their truths.

At the Masters, it’s mostly relief after months of anticipation. The long wait is over. At the U.S. Open, it’s too often anger over course setups or goofy rulings. But none of those emotional pitstops can compare to this Open. This was a psychological cleanse.

For the Northern Irishmen, this major return at Portrush ended nearly seven decades of championship exile. The complexities of the divided country and a conflict defined by religious differences and ancient tribal grudges are difficult for outsiders to understand. But the weight of the moment was clear as Rory McIlroy’s voice cracked following a second-round 65.

“There's a lot of them,” McIlroy, the region’s favorite son, admitted when asked to unpack his emotions following a wild missed cut. “As much as I came here at the start of the week saying I wanted to do it for me, by the end of the round there today I was doing it just as much for [the crowd] as I was for me. I wanted to be here for the weekend. Selfishly I wanted to feel that support for two more days.”

For McIlroy, it was a potpourri of sentiment after he started his week with a crushing 79 and desperately tried to salvage his weekend chances on Friday, only to fall a stroke short. “It's mixed emotions. I'm disappointed, but I'm happy. There's a lot of stuff going on right now,” he said.

Everyone had their stuff at Royal Portrush.

For Graeme McDowell, who grew up next door at the blue-collar Rathmore Golf Club, it was etched into his face as a stinging rain lashed across the 18th green on Sunday. He defiantly gazed skyward with his hat in hand, but it wasn’t disgust with his closing 77. He was clinging to the moment, relishing the final cheers in a week filled with raucous applause at every turn.

“One of the most special days outside of Ryder Cups,” said McDowell, who admitted to having tears in his eyes on the first tee … on Thursday. “I was walking up that first hole at 10 a.m. yesterday morning, they were 10 deep. It was like a Ryder Cup. Really amazing.”

Even the normally stoic Brooks Koepka, who even in victory has regularly proven to be above trite sentimentality, flashed an emotional side on the eve of the final round.

“It's been disappointing. It's just not the week I've been looking forward to, not the week that I've expected,” sighed Koepka, whose motivations were clear with his caddie Ricky Elliott’s roots dug deep into the Portrush landscape.

There hasn’t been a major in some time that’s let the air out of the room the way the 148th edition of The Open did, and no one proved that more than champion Shane Lowry.

But then again, he’s not your typical emotionless troglodyte. Lowry likes to talk.

He talks to his coach, Neil Manchip.

“I think I find when we put everything out on the table and we talk about everything, scenarios, what could happen,” Lowry explained. “When I'm very open with him about how I'm feeling I think that's when I can get the best out of myself. There's no point bottling it up. Because if I bottle it up, I'm going to become too anxious or nervous.”

He talks to his caddie, Bo Martin.

“I said to [Martin] walking off the 17th tee [on Saturday], ‘We might never have a day like this on the golf course again, so let's enjoy this next half hour,’” Lowry said.

He talks to himself, like after a first-round 74 at last year’s Open at Carnoustie.

“I cried,” he conceded. “Golf wasn't my friend at the time. It was something that had become very stressful and it was weighing on me and I just didn't like doing it.”

He really talks to anyone within ear shot. He’s Irish, it’s what they do. Lowry is the softer side of a professional game that values emotional indifference over meaningful dialogue, but for four days along this rugged coast he was no longer the exception to the rule.

Lowry admitted Thursday that he began the week with a healthy amount of anxiety and needed a 40-minute session with Manchip on Wednesday at the nearby Bushmills Inn to clear his head. He revealed Saturday that he couldn’t wait to get his opening tee shot “out of the way,” and spilled to Martin as Sunday’s round wore on in the wind and rain.

“I kept on telling him how nervous I was, how scared I was, how much I didn't want to mess it up,” Lowry allowed.

He was playing for more than a trophy this week and there was no need to hide from that.


It certainly wasn’t all sunshine and rainbows.

Darren Clarke brushed past the media on Friday following a triple-bogey 7 at the last hole to miss the cut by two strokes. The word most used to describe his plight was “gutted.”

And Tiger Woods just seemed homesick and hobbled by a bulky back that seems destined to limit his chances in the game’s oldest championship in the coming years. “I just want to go home,” he sighed.

But mostly, this Open was about emotional joy. For Lowry, who became the first Irishman to win this championship since Padraig Harrington in 2008. For McIlroy, who may have missed the weekend but made untold fans in the process. And for Portrush, which proved it shouldn’t have to wait another 70 years to host the game’s best on these windswept shores.

This transcended a golf tournament. This was a rare chance, for whatever reason, to unpack all manners of feelings. This was truly an emotional Open.