Internationals dominate fourballs, but celebrations aren't in order just yet 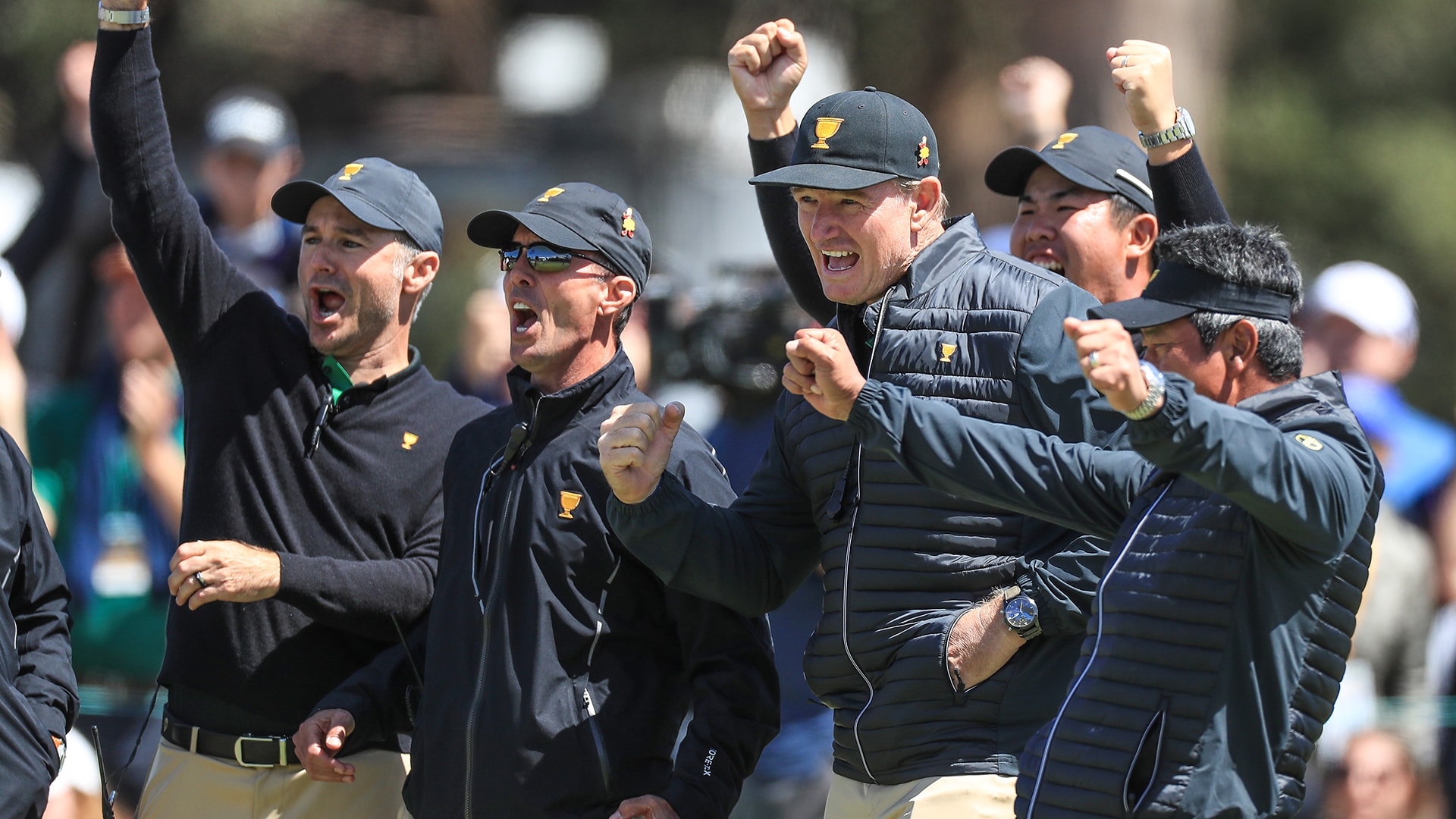 MELBOURNE, Australia – Ernie Els, who hasn’t exactly been his effusive self this week, figured it would be “big” if his team were to win the Day 1 fourball session at the Presidents Cup. It was a historic understatement.

The International side has won the opening-day frame just three times in the event, and two of those occasions were in 1998 and in ’03. It doesn’t take a deep statistical dive to discover that the Rest of World’s only victory in the event came in ’98 and the ’03 event ended in a tie. Both events stand as the high-water mark for the International team.

Nor did Els’ assessment account for what amounted to a rout on Day 1 at Royal Melbourne, where the home team won four of five matches for its first opening-day lead since 2005.

Although Els has been guarded when it comes to details this week, the South African’s plan unfolded nearly flawlessly with his rookies producing some of the day’s most dramatic golf and his veterans stepping in at crucial moments.

The only part of Els’ script that didn’t go to plan was the opening fourball match, which featured U.S. captain Tiger Woods and Justin Thomas against Australia’s Marc Leishman and Joaquin Niemann. Woods won the first two holes with birdie and the Americans rolled to a 4-and-3 victory. Tiger does job as player; work to do as captain

Everything else went the International team’s way including what could arguably be the day’s biggest upset when Abraham Ancer teamed with Louis Oosthuizen to steamroll U.S. Open champion Gary Woodland and world No. 5 Dustin Johnson, 4 and 3. Oosthuizen and Ancer birdied the first five holes to build a 4-up advantage and never allowed the American tandem to get closer than three holes.

“My man just made everything. [Ancer] hit it good. He hit fairways, greens, and it's all on him today. It was unreal,” Oosthuizen said of his rookie partner. “I was just a passenger today in a car watching Abe just playing unbelievable golf.”

Adam Scott, whose pedestrian record in the event (15-20-5) is a bizarre blemish on his resume, was also solid playing alongside Ben An. The duo never trailed in their match against Bryson DeChambeau and Tony Finau and delivered a 2-and-1 victory.

Scott, who is playing in his ninth Presidents Cup and the undisputed locker-room leader, was just as understated as Els following his team’s early success.

“We've really had a big focus on getting off to that good start and it's happened. That was the job done for today,” Scott said. “No doubt we'll enjoy this afternoon, but we have four more sessions to also get the job done. Tomorrow's another very important day for us out here. Our goal is to come out and try and win that session.”

Adam Hadwin and rookie Sungjae Im produced the third point with a 1-up victory over Xander Schauffele and Patrick Cantlay, and the day’s most heated match came down to the last hole with Hideki Matsuyama and rookie C.T. Pan holding off Patrick Reed and Webb Simpson, 1 up.

The final match was particularly pivotal for the home team considering the importance of momentum in these matches, not to mention the psychological boost the Internationals will get from beating Reed, the U.S. team’s emotional epicenter and the side’s celebrated Captain America.

Like he’s done all week, Els had little interest fixating on the past, even the immediate past. The International team needed to win the first day if they were going to have any chance this week, history has proven that, but the Big Easy understands better than anyone how easily his team’s early success can be washed away if they don’t follow it up with another solid outing on Day 2.

“We've played one session. We've got four more to go. We've got foursomes tomorrow. We'll be focusing on that tomorrow, and we'll take it from there,” Els said.

It’s a message that dovetails perfectly with the captain’s overall theme this week. Els has preached the need to put the past and all of the International team’s losses behind them and focus instead on the next match.

There’s no doubt Els and Co. will savor their Day 1 victory, but it will be a short celebration.