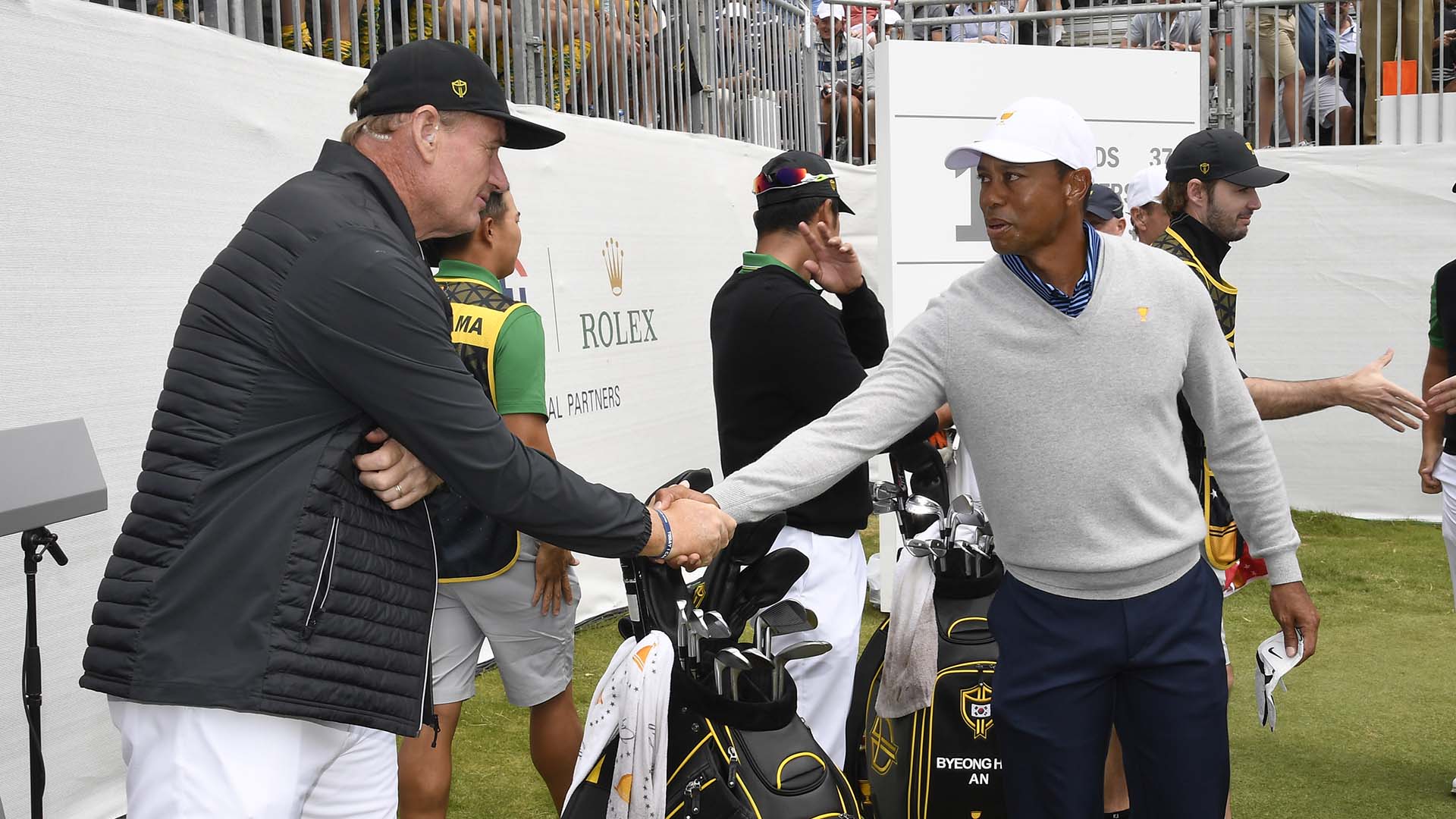 MELBOURNE, Australia – The Internationals still hold a three-point advantage after Day 2 of the Presidents Cup, but the Americans produced a late rally to keep their deficit from being much, much worse.

After a two-and-a-half-point tie in Friday foursomes – good for a 6 1/2 to 3 1/2 International lead – we now move to the most grueling part of the competition. Eight points are available Saturday, four in morning fourballs and four more in afternoon foursomes. Four players must sit in each session.

U.S. captain Tiger Woods is going to rest in the morning for the first time all week, making it likely that he’ll play in the afternoon. Bryson DeChambeau, Dustin Johnson and Gary Woodland will join him on the sidelines. Adam Hadwin, Joaquin Niemann, Louis Oosthuizen and Cameron Smith are sitting for the Internationals.

Here is the breakdown of how Rex Hoggard and Jay Coffin see the morning fourball matches unfolding:

HOGGARD: Thomas is undefeated this week, albeit with the world’s best partner in Woods, and Fowler was clutch to tie his match on Day 2. There’s also the issue that Li sat out the first two days and it all adds up to an early American victory.

COFFIN: Fowler played really well down the stretch Friday and Thomas is starting to find his groove. They’ll be too tough to handle for Leishman and Li, who is making his debut after sitting on the bench for each of the first two days. Easy win for the Americans to get the train moving.

HOGGARD: Scott considered Ancer the International side’s best prospect and the rookie has produced, going 2-0. Leishman also looked better on Day 2 and the Internationals hold on for a clutch point.

COFFIN: This match could go either way and will come down to the final couple of holes. Leaning toward an American win here because Cantlay is absolutely on Cloud Nine after his birdie on the 18th Friday to win his foursomes match. Ancer is 2-0 in his two matches but the streak will end here.

HOGGARD: Reed is 0-2 this week. That’s simply not good enough for Captain America even with the intense pressure he’s been under. Reed rediscovers his match play magic and earns some much-needed redemption for himself and the American team.

COFFIN: Reed and Simpson are 0-2 together and it’s a bit of a shock that Woods sent them out again for a third time. In fact, they lost to Matsuyama and Pan in the opening fourballs. No reason to think this result will be any different. Internationals win this match.

HOGGARD: After so many years of Presidents Cup heartache Scott has found his place on this team and An has quietly become one of the team’s most dependable players. With the way Kuchar putts this will be close, but the Internationals finish the day with a victory to tie the session, 2-2.

COFFIN: Scott has been phenomenal so far, going 2-0. He and An joined to beat Finau and DeChambeau in opening fourballs. This looks like an International win, but Finau is about to find his footing and Kuchar will help out just enough for this to end in a halve. The session will end with 2 1/2 points for the U.S., 1 1/2 for the Internationals.