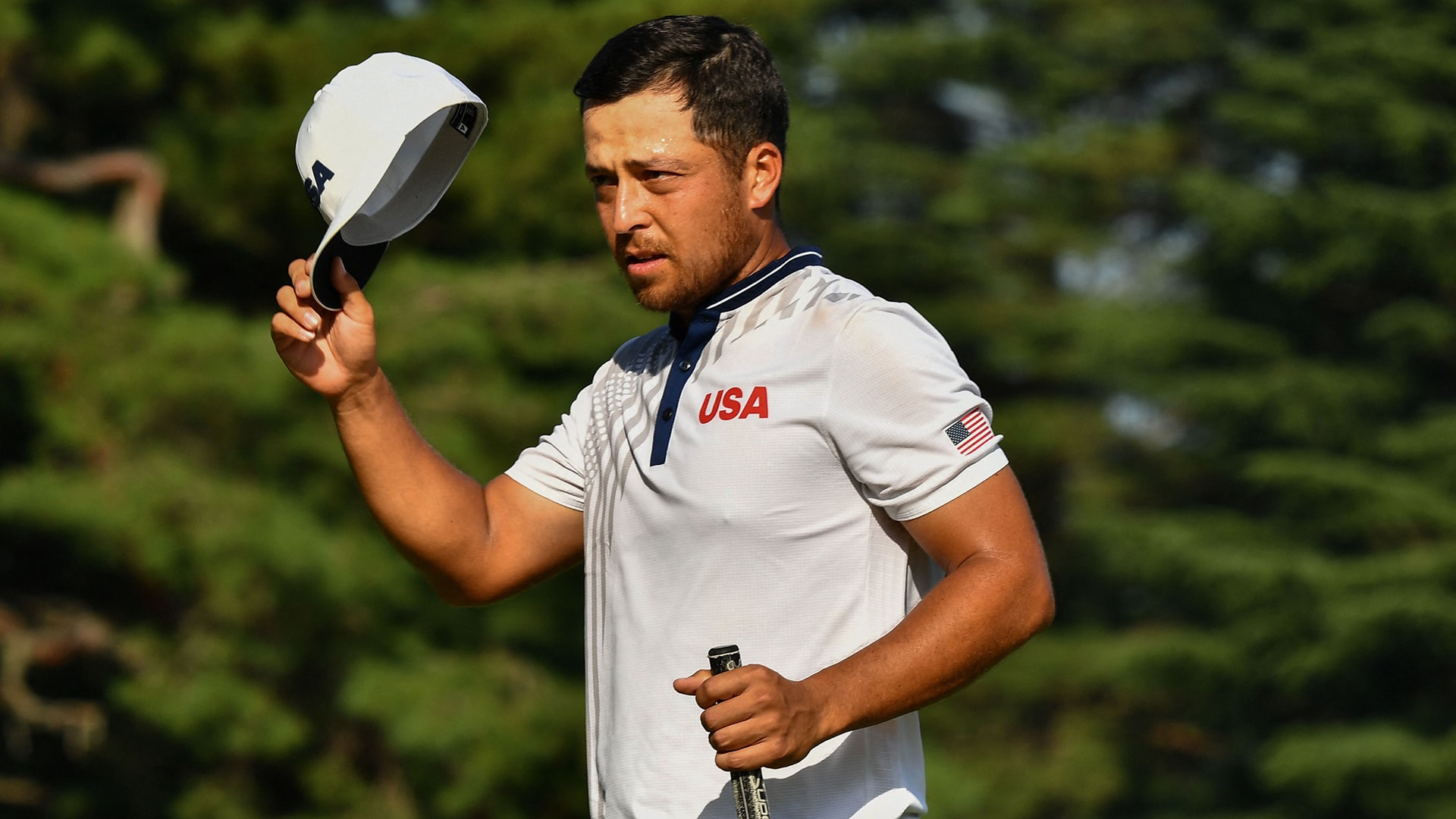 KAWAGOE, Japan — Xander Schauffele didn’t have a lot go his way until finishing on a strong note Saturday, a superb shot to 3 feet for birdie that left him 18 holes away from an Olympic gold medal.

The podium still felt like a long way off.

Five players had a share of the lead at some point in the third round. Schauffele, Japanese star Hideki Matsuyama and Carlos Ortiz of Mexico were still tied playing the 18th hole at Kasumigaseki Country Club.

Schauffele, who spent much of his round in the bunkers and dense rough, managed to end the day with a one-shot lead, in the same spot he started.

From the fairway — foreign turf for him on this day — he hit a 9-iron that landed softly just belong the cup.

Right there with him was Matsuyama, the Masters champion on whom Japan has pinned its hopes on a gold medal. He was recovering from COVID-19 just under a month ago and said he never would have guessed being in this position.

Matsuyama had a 67 and will be in the final group along with Paul Casey, who shot a 66 in his bid to keep the Olympic gold medal in golf with Britain. He was two shots behind along with Ortiz, who made bogey from the bunker on the 18th hole.

Saturday had all the trappings of a shootout, with eight players separated by a mere three shots. That’s not unusual at golf’s highest level, except only three walk away with a medal.

Matsuyama and Schauffele played in the final group at the Masters. Matsuyama started with a four-shot lead and Schauffele, whose mother was raised in Japan, made a late charge that ended with a tee shot into the water on the par-3 16th.

“I’m sure Xander will come out determined to win the gold medal tomorrow,” Matsuyama said.

Matsuyama finished off the rain-delayed second round in the morning with a 64 to get into the final group. He caught up to the lead with a bunker shot to short range for birdie on the 17th, and had to save par from the rough on the last hole.

Could he have envisioned this when he was recovering at home?

“I definitely would not have believed it,” Matsuyama said, adding that he would have been most concerned with his endurance.

That tested the entire 60-man field in stifling heat with only an occasional zephyr to circulate some air on the tree-lined course.

Thomas Bach, the International Olympic Committee president, joined PGA Tour Commissioner Jay Monahan under a tent next to the first tee to watch the final group start. Even with no spectators, Matsuyama still attracted some 250 people, most of them volunteers, all of them hanging on every shot by Matsuyama.

“It does not feel like we don’t have fans out here,” Matsuyama said.

Action came from every corner of Kasumigaseki.

Rory McIlroy, indifferent about the Olympics until he arrived in Tokyo and already looking forward to Paris in 2024, made an early move until he was slowed by a poor pitch that kept him from birdie on the par-5 14th and a three-putt bogey on the 16th hole. He bounced back with a birdie and finished with a 67.

McIlroy was three shots behind, along with Sebastian Munoz of Colombia (66), Mito Pereira of Chile (68) and Sepp Straka of Austria (68).

All were very much in the mix for gold. Others were still hopeful of any medal, a list that suddenly includes Sungjae Im. The 23-year-old South Korean needs an Olympic medal to earn an exemption from mandatory military service, though this isn’t his last chance.

Im was 12 shots out of the lead and was the third player this week to match the Olympic record with a 63. He was still seven behind, though another big round could keep him in bronze range.

Schauffele has been trying to treat this as any other tournament, and it felt like one Saturday.

“Tomorrow may feel a little different,” he said. “There’s a little bit more on the line than what we normally play for, and you’re obviously trying to represent your country to the best of your ability. So that’s why I’ll be on the range tonight.”

His swing was out of sorts from the start, and his father, Stefan, kept a monocular to his right eye and could see flaws that weren’t there during his warm-up session, most of the shots to the left. Schauffele delivered key par putts, and a pair of birdies on the easier scoring holes, to keep the round and the lead from getting away from him.

He was in trouble on the ninth, in the trees off the tees and having to lay up to the fairway. He escaped with par by making a 25-foot putt.

“Your putter doesn’t know how bad you’re swinging it,” Schauffele said. “We’re getting it done right now. So I would like tomorrow to be a little bit more fun all round.”