Is this the most anticipated Masters in recent memory? 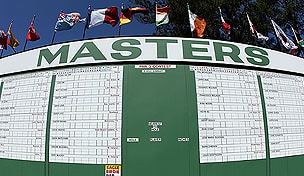 Getty Images
AUGUSTA, GA - APRIL 04: A Masters leaderboard is seen during a practice round prior to the 2011 Masters Tournament at Augusta National Golf Club on April 4, 2011 in Augusta, Georgia. (Photo by Andrew Redington/Getty Images)  -

On the eve of the 76th Masters, it's easy to get swept up in all the hype and excitement revolving around golf's biggest names on the game's grandest stage. But if we remove ourselves from the immediacy of the event, can we say this is the most anticipated Masters in recent memory? GolfChannel.com senior writer Jason Sobel and Bailey Mosier weigh in.

With big-name stars such as Rory McIlroy, Tiger Woods, Phil Mickelson and Luke Donald already compiling victories in the first three months of this season, many people are claiming they’re more excited for this Masters than any previous one.

That’s a matter of personal preference. There’s no unit of measurement for anticipation, so this is a difficult one for which to find a conclusion, but I’m pretty sure I can find one that topped this year’s edition of the event.

As long as your “recent memory” goes back 11 years, then you’ll recall the fervor surrounding the so-called Tiger Slam in 2001. After Woods won the final three majors of the previous season, he entered that Masters with a chance to become the first player to hold all four major championship trophies in the modern era, eventually pulling off the feat.

Perhaps in today’s age of social media, more is being said and written about Augusta now – just in terms of volume – but even with many of the game’s top players faring so well early in the year, collective anticipation still falls short of 2001, which Woods eventually won in historic fashion.

Again, there’s really no way of measuring anticipation, but here’s to estimating the maelstrom that encircled the Masters that year surpassed what we’re witnessing right now.

On the eve of the 76th Masters, our questions have answers. We know he can do it.

Who is the 'he' I’m referring to, you ask? Therein lies the beauty of my argument. 'He' is any number of the game’s top players.

We know Tiger Woods can win again. He topped the Arnold Palmer Invitational field by a five-shot margin last month. He again knows what it feels like to stand in the winner’s circle and more important, he knows how to find it.

We know Rory McIlroy has the stuff major champions are made of. We know that he can hoist the Sunday silver in record-setting style. And if his U.S. Open showing is any indication that he put his Sunday demons to rest, then who’s to say McIlroy won’t finish what he started last year at Augusta?

And we know Phil can still thrill and even take down Tiger in a Sunday showdown much in the way he did at Pebble Beach earlier this season.

We’re not speculating anything about three of the game’s biggest stars – any one of them is fully capable and prepared to capture another major victory. And because of that, we are on the verge of one of the most exciting Masters in recent years. The stage is set and the leading actors are about to go on.