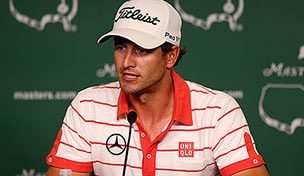 Getty Images
VIRGINIA WATER, ENGLAND - MAY 21: Robert Karlsson of Sweden checks his yardage during the second round of the BMW PGA Championship on the West Course at Wentworth on May 21, 2010 in Virginia Water, England. (Photo by Ian Walton/Getty Images)  -

AUGUSTA, Ga. – Adam Scott enters this Masters as he has the past couple years: looking for his first major victory having played a limited competitive schedule.

Scott said a couple years ago that he would “competitively starve” himself to better prepare for majors, meaning he wouldn’t play just for the sake of playing. He enjoys the preparation for tournaments, but will compete only in tournaments that help him toward a bigger goal. That’s why he’s played only four times this year, the last time coming four weeks ago at the Tampa Bay Championship.

“That’s been the way I’ve prepared for the event the last couple of years and it’s brought some success with a couple of top 10s here,” Scott said Tuesday at Augusta National.

You wouldn’t know it, though, with some of the questions that were asked. Scott was reminded for the umpteenth time that an Australian has never won a Masters. He was asked about his meltdown last summer at the British Open, where he coughed up the claret jug and handed it to Ernie Els. He was even asked what it’d be like to win a Masters with Tiger Woods seemingly on top of his game.

“I’m not really thinking about that,” Scott said.

This week will likely come down to putting for Scott, as it will for most everyone else in the field. It’s no secret that the anchored stroke has made him more consistent, which is a big reason why he’s collected four top-10 major finishes in the last two years.

“I just got so frustrated with the inconsistency in the way I was putting,” Scott said of his traditional putter. “The good stuff was great but … I just didn’t know when that good stuff was showing up.”