Scott teeing it up for first time since Masters win 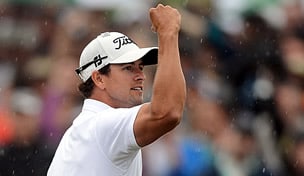 PONTE VEDRA BEACH, Fla. – Adam Scott feels like he’s floating even when he isn’t wearing his green jacket around the house these days.

It’s a wonderful image Scott chose Wednesday to describe what it has been like in the month since he broke through to win his first major championship at the Masters. Given the weight of expectations he was saddled with as a prodigy, and the weight of failure in his collapse at the British Open last summer, Scott’s sense that he is floating delightfully captures what his life is like now.

Scott returns to play this week at The Players Championship knowing the challenge this sense of floating presents.

“Hopefully, I can take my head out of the clouds and come back down to earth and play some good golf,” Scott said before heading out to practice Wednesday morning.

Scott usually takes off four or five days after a major to decompress without touching his clubs. He said he took a week more than that after winning the Masters.

“It's been an overwhelming time for me,” Scott said. “Just so many people reached out to me, I was blown away. That comes from everywhere, especially Australia, but over here as well, other players, media, everyone. It was incredible.”

Scott was asked if he wakes up in the morning realizing he really is the Masters champ and it wasn’t all a dream.

“When I walk in the closet, and I put the green jacket on every morning, I do,” Scott said.

He wasn’t kidding. He likes wearing that green jacket.

“I've enjoyed that,” Scott said. “I've missed it the last couple days. It's the first couple days I haven't had it with me, so that's been a lot of fun, just wearing it around the house.”

Or floating around the house.

At 32, Scott could float the rest of his career if he wanted. Really, if he never wins another major, he won’t be remembered as a one-shot wonder. He’ll always be the first Australian to win the Masters. The feat will loom over the rest of his career. He is Aussie golf’s Neil Armstrong. He’ll be walking where no Aussie golfer ever walked before when he checks into the Augusta National Champions Locker room next year.

Here’s the thing, though, Scott wants so much more.

“It’s probably going to be the pinnacle of my career, because, also, of the whole of Australia, as the first Australian to win the Masters, but it's also not the end for me,” Scott said. “Hopefully, it's the start of me achieving my goals and trying to become the player that I've always dreamed of being.”

That’s why Scott did not come back earlier to play a PGA Tour event after winning the Masters. He wanted to feel like he was really ready to play. It’s also why he hasn’t yet returned to Australia since winning. He wants to build on this Masters title before celebrating back home.

“It’s cause for celebration, but we have a plan in place, and like I said, it's hopefully not going to stop with the Masters at the moment,” Scott said. “I want to keep focused while I can and try to make this my biggest year yet, and I think we can rustle up some celebration when I get home at the end of the year.”

Greg Norman, the most famous Aussie golfer, believes Scott is destined to surpass what he or any other Australian has achieved in the game.

“I think he will go on and win more majors than any other Australian golfer,” Norman said.

“Greg's had a huge belief in me,” Scott said. “Again, saying things like that, he strongly believes in my ability and he's always pushed me to achieve.”

“It was a great win for golf,” said Davis Love III.

Love knows how Scott’s popularity goes beyond Australia and even the game. The fact that the TV show “The Bachelor” wanted Scott after his Masters victory did not surprise Love. By the way, Scott turned down the show’s approach, saying he is in a committed relationship. He’s dating Marie Kozjar, a Swedish architect.

Love learned the strength of Scott’s mainstream appeal when he was hitting balls on a range at an event not so long ago. Love caught a glimpse of his daughter and two other girls on a golf cart racing toward him. He assumed they were coming out to watch him hit balls.

Scott is sure to have a growing following with his return to play this week. He is enjoying his new status, but he wants to keep building on his game this year. Whether, as Norman predicts, he can surpass Thomson’s five majors isn’t so much on his mind, but he does want more majors.

“I should set my goals high, like I always have,” Scott said. “If I can find the balance of using this as a motivator, and take the confidence out of what I was able to do at Augusta, then hopefully the floodgates can open. It happened a little bit for Phil Mickelson. Well, a lot for him, when he finally won his first major. He won four. So, if I keep focused, I think I believe I've got more in me. How many, I don't know. But I think if I keep doing the same things, I'll give myself a chance to win them.”

A chance to float even higher.