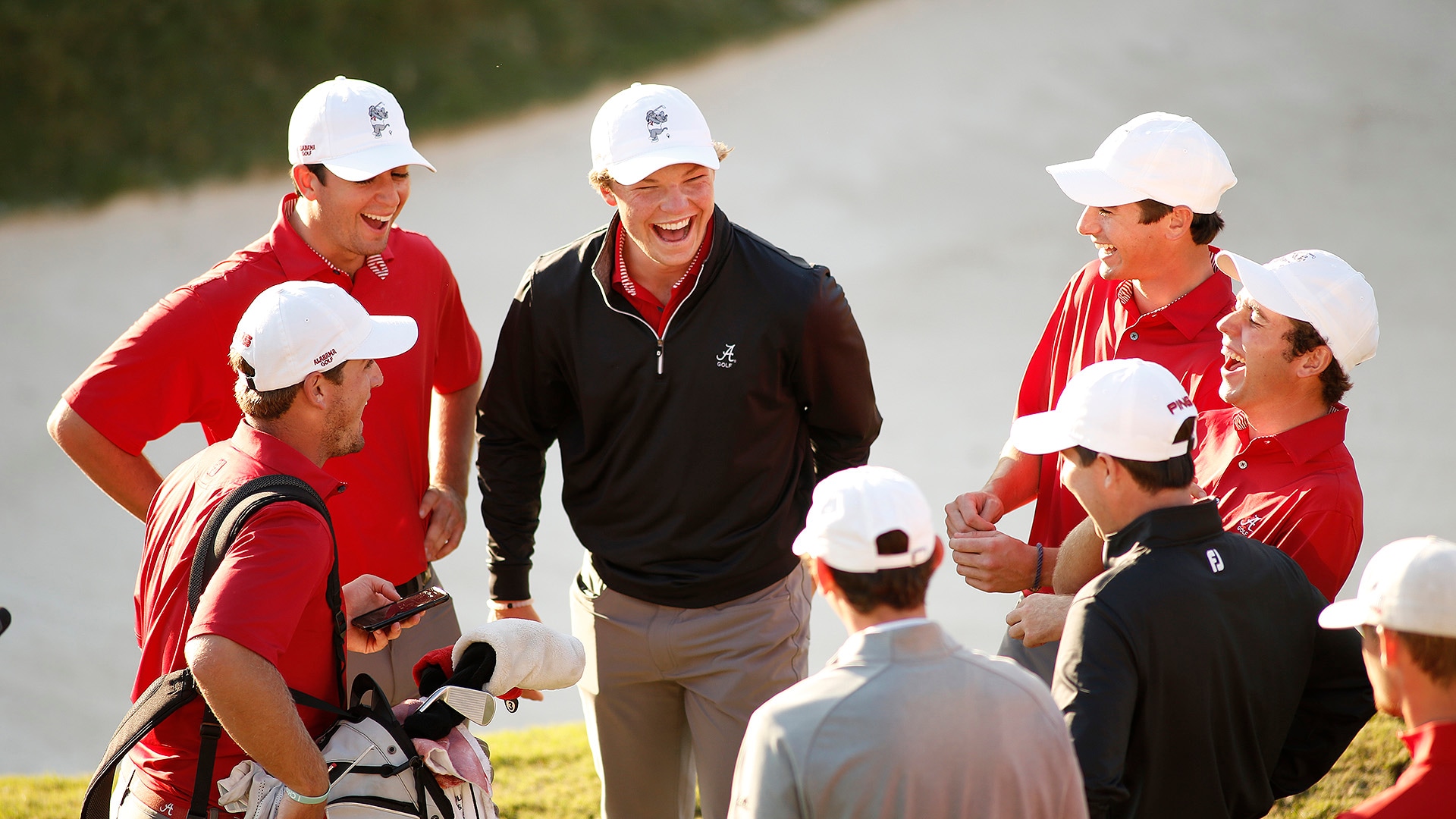 “I think it will be good for TV and good for the fans to watch on both sides,” Tigers coach Nick Clinard said. Auburn defeated top seed Duke by winning three of the first four matches.

The dramatics displayed in the day’s final match certainly added to the viewing experience. Both Oklahoma State and Alabama owned two wins and the match came down to the anchor pairing of Cowboy sophomore Austin Eckroat and Crimson Tide sophomore Wilson Furr.

Eckroat led by two with six holes remaining and had not trailed the entire round. Then a pep talk from Furr’s coach created the momentum he needed.

Furr won No.13 with a par, halved 14 with a birdie, and used a downhill birdie on the 15th hole to even the match. Another par on 17 gave him a 1-up lead before the final hole. He put his drive in the fairway and his second on the green from 265 yards out.

“What a good shot Wilson Furr hit in there on the last hole,” Oklahoma State coach Alan Bratton said. “So credit him, that’s not an easy shot off that down slope, so congratulations to them.”

Auburn took the fourth seed after Monday’s stroke play, but it did not fret senior Jacob Solomon. “I do not think we had our best day yesterday. We have an unbelievably talented team,” he said. “Historically, we are not a that great of a first round team. I think just adjusting to the golf course and we got another day under our belt.”

He delivered Auburn’s first point with a 7-and-6 victory over senior Shrish Dwivedi. At the time, it tied them with Duke, but the final three matches all went to the Tigers. Junior Jovan Rebula closed out his match with a birdie on hole 15 to earn a 4-and-3 win.

Sophomore Brandon Mancheno was in a tight contest with Duke junior Chandler Eaton. He did not lead all day until winning the match 1 up with a birdie on 18. Mancheno bounced back after an 8-over 80 on Monday. “It feels good to show I have a little fight left in me on this golf course,” he said.

His win claimed the team victory for Auburn as the Tigers, and when it was clear the Crimson Tide would emerge as their opponent, the area behind the 18th green began to buzz about an Iron Bowl matchup at East Lake.

“Tomorrow we are playing Auburn, who beat us in the SECs and just beat Duke. They are a top ten team and SEC rival,” Seawell said. “All the stuff that is getting ready to happen, we need to play good.”

Auburn topped Alabama 3-2 at Sea Island Golf Club in last season’s SEC Championship. “Hopefully our team will show up like we know how, and how the SEC champs do,” Solomon said.

Championship match: No. 4 Auburn vs. No. 3 Alabama

Consolation match: No. 1 Duke vs. No. 2 Oklahoma State

Live broadcast coverage of Day 3 of the East Lake Cup begins at 3 p.m. ET on Golf Channel and Golf Channel Digital, and is also available via the Golf Channel’s mobile app.