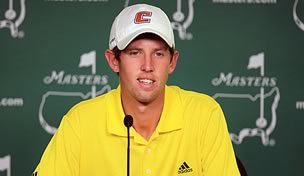 AUGUSTA, Ga. – One of the Masters great traditions is including top amateurs in the field. This year there are six at Augusta National, and while many of the attention is focused on 14-year-old Tianlang Guan, there are others who are more accomplished.

U.S. Amateur champion Steven Fox is one of those players. The 22-year-old has taken full advantage of the opportunity and figures he’s played Augusta National close to 13 times over the past couple months.

Fox arrived for the Masters six days ago and says he’s played practice rounds with Phil Mickelson, Keegan Bradley and Jason Dufner, among others. Mickelson shared his vast knowledge of the course with Fox.

“Obviously you have to be smart, but he took it to a bigger level about playing smart, what side to miss on,” Fox said. “He would show me putts that nobody knows about really but Phil. His little black book that he has, it’s really phenomenal what he has in there of all the years he’s played.”

Yes, Fox has walked over to the spot right of the 10th fairway where Bubba Watson hit his miraculous hook shot last year to win the Masters.

“Every time I’m like ‘how did it happen,’ ” Fox said. “What he did, only a left-hander could have hit … truly remarkable.”

Fox admits that he made a mistake following his U.S. Amateur victory last summer, because he tried to tinker with his swing too much. It has produced mediocre results and he says he’s just now feeling more comfortable.

In two PGA Tour starts this year Fox has missed the cut in both. The brightest moment came in a first-round 70 at the Farmers Insurance Open, but he shot 78 in Round 2 and easily missed the cut. Last month at Bay Hill, Fox shot 78-81 and finished last in the field.

“If I didn’t have those and this was my first event, I would be shaking a little more,” Fox said. “But having those – even though I missed the cut – those four opening tee shots in Tour events are helpful.”