America, get to know Thorbjørn Olesen (the underground McIlroy) 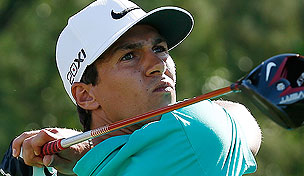 DORAL, Fla. – The relaxed 23-year-old with the infectious smile slumps back into a plush leather chair in the Dove Mountain clubhouse and considers his wholesale transition to Nike Golf gear this season.

“There are just some things you learn when you play tournament golf,” he reasoned. “It takes a little time.”

That is where the comparisons between Thorbjørn Olesen and Rory McIlroy end. Although they both transitioned to the Swoosh this season, the Dane’s jump has been much smoother and, by comparison, much less documented and dissected than McIlroy’s.

And that’s fine with Olesen.

“It must have been unbelievable for him,” Olesen said when asked about his Nike stablemate’s start with the company earlier this season in Abu Dhabi. “I have no idea how he felt, but it could not have been an easy week for him.”

For the record, while McIlroy was missing the cut following rounds of 75 in Abu Dhabi, Olesen quietly finished tied for second place with world No. 5 Justin Rose.

At Dove Mountain, while the world No. 1 was enduring a Round 1 loss, Olesen beat Jamie Donaldson, the man who edged him in Abu Dhabi, and dropped a tough second-round match to Tim Clark despite a persistent groin injury he’d been battling since ... wait for it, falling off a camel earlier this year in Dubai.

American galleries will get their first real look at Olesen at this week’s WGC-Cadillac Championship, just his third career start in the Lower 48, and a word of caution seems necessary – don’t let the sinewy, stoic exterior fool you.

Olesen (pronounced OO-les-en) is a collection of contradictions. Although his swing is effortless and efficient, he is not a product of a golf academy. Truth is, growing up in Fursø, Denmark, a suburb of Copenhagen, Olesen spent the better part of his youth on a soccer pitch.

It wasn’t until he turned 15 and earned a spot on the national team that he began to focus on golf. Three years later he turned pro, a dramatic break from the norm with a singular intent – improvement.

“I felt like I learned more when I played pro tournaments than I did when I played amateur events,” he said. “I just decided to turn pro and learn how to play the game that way.”

And Olesen has continued to impress those around him ever since.

“He is a guy with a very good golf swing, very athletic, hits the ball a long way, like most kids these days,” said Clark when asked about Olesen at the Match Play. “He seemed to have a very good short game. He made a lot of good up-and-downs today, and then when the match got tight at the end, he hit a lot of good shots, too. He looks like a very good player.”

By 2011 Olesen had earned his European Tour card; by 2012 he’d already secured his first title on that circuit (Sicilian Open) and last July he jumped another rung on the ladder to success with opening rounds of 69-66 at the British Open that set up a Saturday two-ball with Tiger Woods.

That he matched Woods nearly shot for shot – he carded a 71 to Woods’ 70 – on his way to a tie for ninth at Royal Lytham was worth almost as much as the Sicilian victory in emotional capital and confidence.

“It’s good to get that experience so early,” he said. “After that I could go into every tournament and actually believe I could win the tournament. That belief is very important to me. You want to get that feeling back.”

At his current pace, more run-ins with Woods, or maybe next time it will be McIlroy, seem likely.

He’s already secured his first start at Augusta National later this spring and if he can maintain his place inside the top 50 in the world golf ranking (he’s currently 41st) through this week, he will earn a spot at the Arnold Palmer Invitational.

It is all part of a slow, steady and uber-serious progression that is sometimes masked by the inviting smile and flat-billed baseball hat.

“I think he feels like he’s meant for it. It’s not new because it is where he is supposed to be. He’s seems totally relaxed about it,” said Rocky Hambric, Olesen’s manager with Hambric Sports. “He never seems to be intimidated.”

Nor does he seem to take himself too seriously, which would explain his unique first name. Those who grew up with Olesen in Fursø knew him as Jacob, but in 2008 when he joined the play-for-pay ranks he switched to Thorbjørn, his middle name, because, “Jacob was a common name in Denmark and I just found Thorbjørn a little more special,” he said.

And while Thorbjørn (pronounced TOR-be-yorn) may be a tad daunting for American audiences, he seems to have fit in nicely here at the WGC-United Nations. It’s all part of a climb that even at his young age Olesen understands will eventually bring him to the U.S. full time.

“I want to try and be a worldwide player,” he said. “You have to learn to play well in America. That is where the biggest tournaments are.”

Until then he’s content being the other 23-year-old, the other freshman member of the Nike Golf staff, even the other Dane (he counts Thomas Bjorn as one of idols).

Just don’t expect that kind of anonymity to last for long.