Are you sure we're at the right Stadium? Leaderboard more crowded, less red in Palm Springs 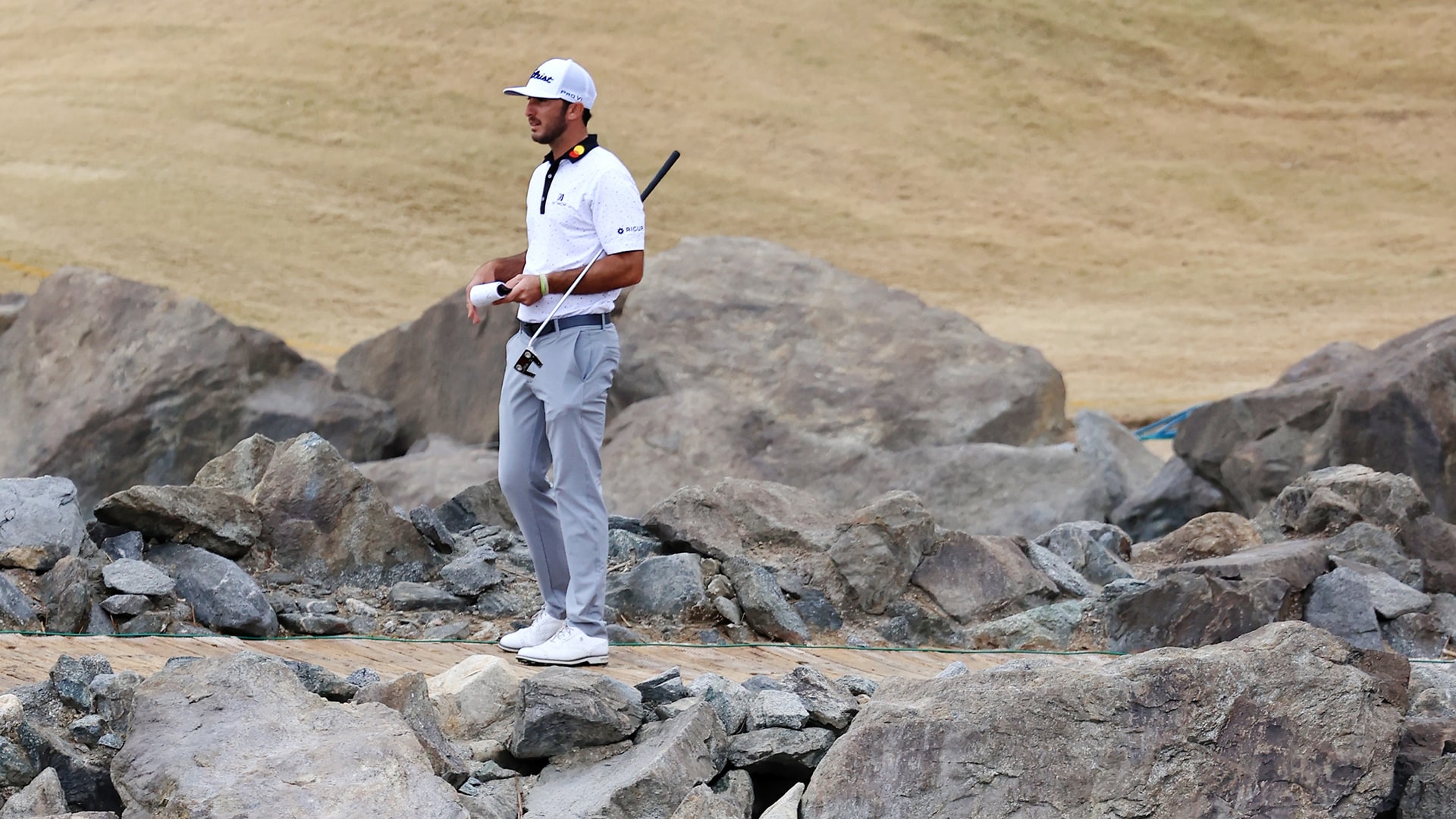 LA QUINTA, Calif. – The Stadium Course at PGA West fancies itself a more user-friendly version of its East Coast cousin at TPC Sawgrass, all the way down to its own version of an island green.

On paper, the difference between the 17th hole at TPC Sawgrass and the penultimate stop at PGA West is roughly 20 yards and a few hundred square feet of putting area. But even on a cold and drizzly day in the Coachella Valley, the West Coast version of Pete Dye’s brainchild was still a more welcomed version of its more high-profile counterpart.

“I think this hole, I mean, I don't want to say it's easier, but being elevated kind of hitting down I feel like the green looks a little bigger, even though it's probably not, it's probably smaller I imagine,” said Russell Knox, who lives in North Florida and has plenty of experience at TPC Sawgrass – and not all good (see the 2016 Players). “But the fans make a big difference. The buzz of it, so maybe not having that makes it slightly easier.”

If the relative difficulty of the two courses is where the Stadium courses diverge, the promise of unpredictable entertainment on Sunday is what binds the two layouts.

Three players, including Si Woo Kim, who won the 2017 Players Championship at the original Stadium, will begin the final round tied for the lead at 15 under with another nine players within three shots of the lead. If Day 3’s script was any indication, expect more crowding on Sunday.

Sungjae Im began the third round with the lead at 11 under and faded quickly with his first bogey in 24 holes at No. 5 and a triple bogey-7 at the ninth. He put a sleeve of golf balls into various water hazards in a four-hole stretch on the front nine.

Emiliano Grillo moved into the lead at 14 under with a birdie at No. 8 but played his final 10 holes in 1 over par, and Richy Werenski briefly took the lead before his first bogey of the week at No. 13.

When the round finally ended on an uncharacteristically cold day in Palm Springs, Kim was tied with Max Homa and Tony Finau at 15 under par. What’s normally “Golf in a Dome” has been given an edge this year by cooler temperatures, windy conditions and not having the easier La Quinta Country Club to beat up on after officials canceled the multi-day pro-am portion of the event because of COVID-19 concerns.

“It's one of those things you can make a bunch of birdies here, but if you get just a little off on a tee shot or a little off on a second shot you can get yourself in a really precarious spot,” said Brian Harman, who is tied for fifth place with Knox.

Homa is the best example of this dichotomy of play. On Friday, he was cruising along at 9 under for the tournament before a triple bogey-7 at the 10th sent him spiraling down the leaderboard. Another miscue, a double bogey-6 at No. 7, temporarily stalled his climb on Saturday, but he was perfect the rest of the way for a third-round 65.

Finau, who is vying for his second PGA Tour title to the surprise of golf fans everywhere, had a similar lapse on Saturday after grabbing a share of the lead at 14 under through 12 holes before finding the water with his tee shot at the par-3 13th hole for a double bogey.

“It takes a lot of patience, but I've taught myself how to stay patient in these tough moments. There's a lot of golf left,” Finau said. “I knew I was playing well. I had a feeling I was going to string on some birdies. I just had to stay patient with myself.”

Kim played the most PGA West-like card with five birdies and 13 pars for his second bogey-free round this week. It is what players have come to expect at what is traditionally one of the Tour’s lowest scoring events.

The twist this year to that tradition is a course that’s playing more like its East Coast cousin. There are still plenty of birdies with just a hint of danger lurking, all of which has created a congested leaderboard that would be welcomed on either Stadium Course.