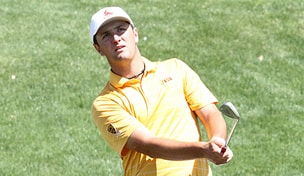 So much for all that talk about how difficult the Capital City Club would play during this week’s NCAA Championship.

Arizona State freshman Jon Rahm fired a blistering 9-under 61 during the first round of stroke-play qualifying Tuesday to set the early pace. According to the school, Rahm’s 61 broke the record for the lowest opening-round score in tournament history.

When he finished his round on the Crabapple Course, Rahm was four strokes clear of Oklahoma senior Abraham Ancer (65) as the afternoon wave got underway outside Atlanta.

Arizona State, which entered this week at No. 38 in Golfstat’s rankings, had the low round of the morning, a 10-under 270 that put the Sun Devils eight shots clear of the early starters.

Earlier this month, Rahm was named the Pac-12 Freshman of the Year after a two-win campaign that included five top 10s and a 71.60 scoring average. He was tied for third in birdies made this season (138) and was No. 85 in Golfstat’s individual rankings.

The NCAA individual champion is determined after three rounds of stroke play. Alejandro Canizares (2003) was the last Arizona State player to win the title.

6/1/07 -- Duke's Michael Schachner broke the NCAA tournament record with a 10-under 60 on Friday, and Stanford took a two-stroke lead over Coastal Carolina with one round left.

6/1/07 -- Just as they were after one round, the Stanford Cardinal remains the team to catch halfway through this years Mens Division 1 National Championships.