Autographs: Another thing the King got 'write' 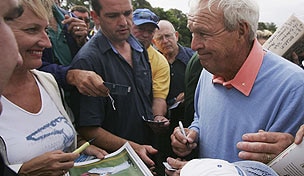 Getty Images
VIRGINIA WATER, ENGLAND - MAY 19: David Howell of England reacts to a shot during the Pro-Am round prior to the BMW PGA Championship on the West Course at Wentworth on May 19, 2010 in Virginia Water, England. (Photo by Ian Walton/Getty Images)  -

Arnold Palmer reached for a black pen and a blank piece of paper, and for a moment, he went back in time to the first grade.

''My first year in grade school, my teacher was a lady by the name of Rita Taylor,'' Palmer said. ''The blackboard around the room had 'The Palmer Method of Writing,' and that was the system with which we were taught to write.''

The King didn't invent the popular method of teaching cursive. Among athletes, he perfected it.

Pen in hand, his right arm moved in a slow, circular motion for several seconds, as if rehearsing. Then, he started writing what has become one of the most famous autographs in sports. Even at 83, Palmer makes sure every fan can read his name. And like so many other aspects of his golfing career, his influence spans generations.

''I've always heard you need to make it legible, and I try to do that,'' Tim Clark said as he signed for fans behind the railing at Doral this spring. He used lower case for his entire name, and it was as clear as can be.

Where did he hear this advice? ''Arnold Palmer,'' he said.

Tiger Woods has a distinctive style with his autograph, perhaps not as legible as Palmer's, but easily recognizable. He signs his name with the same penmanship he would use to write a letter, and if you pay close attention, there is this idiosyncrasy in the way he does it – he always dots the ''i'' in his name.

''I do it every time,'' Woods said. ''Sometimes I'll hit the 'W' and sometimes I hit the 'T' because of the speed I'm being pushed along or people moving around.''

the Masters isn't the best place for fans to collect autographs. Augusta National has a strict policy of limiting requests to a designated area near the practice range and during the Par 3 Tournament. There are no autographs allowed on the golf course. A prized possession, however, is a yellow Masters flag signed by players.

The question, as with any other golf memorabilia, is whether anyone can read the names. The example set by the likes of Palmer, Jack Nicklaus, Gary Player, Byron Nelson, Ben Hogan and so many others has not carried over to this generation.

Look at any flag filled with player autographs and try to figure out who they are. Some players sign. Most just scribble.

''I've never enjoyed trying to figure out who's who,'' Phil Mickelson said. ''When you play on a Ryder Cup team and a name is missing, and I can't figure out any of them that are actually on the flag, there's no way to find out who's missing. That's always frustrating. It's just showing respect, whether it's for fans or whoever you're signing for.''

For more than a decade, Harrington's signature looked like it belonged on a doctor's prescription. To say it was illegible would be a compliment. The ''P'' and the ''H'' could barely be detected. Otherwise, it looked like the ink stamp from a chicken claw.

And then he won the British Open at Carnoustie.

''Up to that, I always signed my name as I would sign a check,'' Harrington said. ''My caddie gave me a lecture after I won the Open. He said if he was a little kid and asked me for my autograph, and that's what he got, he'd be very disappointed.''

The Irishman took that to heart. He now signs his full name, a style similar to Palmer.

''If you're going to sign it, you'd be better off signing less and signing it properly,'' Harrington said. ''I do notice the others (that can't be recognized). And I think it says a lot about the person.''

Zach Johnson signs with a ''Z'' and a line through it. He won't win a penmanship contest, but there is no question whose name is on the flag. He is happy with his effort and believes it is legible. And then he saw another name on the flag.

Above where he signed was the name of Michael Thompson, nearly all 15 letters in the name as clear as can be. Much like Harrington, Thompson took the advice of his caddie, Matt Bednarski, about a month after they began working together in 2011.

''I give credit to Matt. He told me to make it legible,'' Thompson said. ''I changed it to write every letter, to emulate Arnold Palmer. He has probably the greatest signature in history. You can't read 70 percent of the names on a flag. Every now and then you can kind of make out who they are if you know the players. Mine sticks out like a sore thumb. I've gotten more compliments on my autographs from fans, kids and parents than I ever would have imagined.''

Rory McIlroy still has a lot room for improvement.

His signature is a series of loops that are as curly as his hair. It is difficult to decipher the ''R'' or the ''M'' or even what language it is. A young girl with an oversized foam golf ball at the Houston Open proudly showed her autographs. There was Steve Stricker, Justin Leonard, Mickelson. And then she gleefully said McIlroy had signed it.

She pointed to a bunch of loops. ''I think he signed it upside down,'' she said.

Mickelson is a master of autographs, signing for up to an hour after his round, though he has started to cut back as he gets older and has other obligations.

''I've got so many letters that it's hard to make every one meticulous,'' Mickelson said. ''I do the best I can to make sure you know whose it is, but I still have to make it somewhat quick, too. But look at Palmer, Hogan, Nelson, Nicklaus. They always felt like if it was worth the time to do it, then do it right. Make it legible.''

Ian Poulter, of course, wanted some style. He finishes writing his name with a big loop that becomes a circle, and then he draws a hole and a flagstick in the middle of the loop.

''If you look at people's signatures through the years, some you can read, and most you can't,'' Poulter said. ''And if you make something a little different, identifiable with the name, everybody knows what signature it is. Everyone knows my autograph.''

It wasn't always that way, of course. He started his career signing his full name – Ian James Poulter – until he won his first European Tour event.

''When you've just won the Italian Open and you're asked to sign a couple of hundred things, we need to think this out,'' Poulter said with a grin. ''That winter I changed it to 'IJ Poulter' with the green. But I don't think everybody sees signing the same way. Some guys see it as a pain. ... Some guys quite enjoy it. I quite enjoy doing it.''

And then there's John Daly, who has three autographs – one for kids, another if he detects the fan wants to sell it, and third for personal items.

''It's totally different on legal stuff,'' he said. ''I'll do 'John P. Daly.' For autographs I know they're going to sell, I scribble. It's the ugliest signature you'll ever see, and they can't sell those.

''But for kids,'' Daly said, stopping to sign for a young boy at Innisbrook, ''that was a beautiful signature.''

Harrington said it can get annoying to see the fans looking to make money from an autograph, especially when they're pushing kids out of the way to get it. But as he finished walking 100 yards along the fence, signing items and saying, ''You're welcome'' to everyone who thanked him, he still saw it as a privilege.