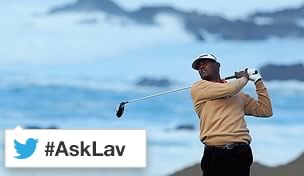 Only a story as unsavory as Vijay Singh’s deer-antler spray can spoil the felicitous meeting of land and sea.

The most talked-about 49-year-old in golf played Pebble Beach on Thursday, just nine days after he admitted in a Sports Illustrated story that he uses a banned substance, just a week after he withdrew from the Phoenix Open citing a back injury. Quick healer.

Here’s what we know: Singh, in a statement, said he was “shocked” to learn that deer-antler spray contained a chemical (IGF-1) that was on the Tour’s banned-substance list. We know that he met with commissioner Tim Finchem on Wednesday to discuss the report. We know that he’s playing the Pebble Beach Pro-Am. And we know that the PGA Tour has yet to comment on the situation.

It seems unlikely that Singh knowingly took a banned substance; if he had, why openly discuss his use with a SI reporter? But that defense misses the point. Singh used a substance that violates the Tour’s anti-doping policy, and he deserves to be suspended, whether it’s three months, six months, nine months, or a year. Anything less makes a mockery of the Tour’s stance on performance-enhancers.

With that, let’s tear into another #AskLav mailbag. No surprise, there were more Singh queries this week:

Is deer antler spray capable of removing the 'Vijay Singh' etching on my belly? #AskLav

Only if it’s applied “every couple of hours … every day,” as Singh outlined in the SI story. Just kidding. Sure, Singh could be sent to the sidelines for a few months, maybe even a year, but there is no way the Tour flips open the record books and begins scrubbing with a giant pink eraser. Besides, Vijay last won the PGA in 2004, long before the Tour enacted an anti-doping policy.

#AskLav - Do you think the tour is going to take this opportunity to use Vijay as an example of 'what not to do'?

No, this is more an opportunity for the Tour to demonstrate how serious it is about PEDs. If it doesn’t crack down now and suspend a player – a Hall of Famer – who admittedly used a banned substance, what’s that say about its policy?

@golfchannel #AskLav Self imposed penalties at the heart of the game's honor; Singh should suspend himself

Now there is some much-needed PR advice for the Big Fijian.

@ryanlavnergc #AskLav What do you think of TMaG CEO's comments about the USGA being obsolete in 10 years? Over the top?

Hyperbolic, perhaps, but Robert Garrigus recently raised a similar point in criticizing the USGA: “They are amateurs who are making rules for a professional game.” Mike Davis and Co. are at a crossroads, and if the PGA Tour decides to go away from the anchoring ban and create its own rule, well, Mark King’s prediction won’t be so easily dismissed.

@ryanlavnergc why won't the Tour single out the slow players on Tour?why doesn't the media point them out as well?#AskLav

Why would the Tour embarrass its own? Ask any player and he’ll tell you the slowpokes. But the Tour would never go out of its way to humiliate its own players – same reason it doesn’t reveal suspensions – which is why the ShotLink data is locked away in a safe somewhere deep inside Camp Ponte Vedra, never to be used for public consumption.

#AskLav but then we get into 'fade, cut, baby cut, baby fade, stinger cut' and what ever else drips out Johnny Millers lips. Novice says???

So, wait … you don’t like that a color commentator is using, uh, colorful phrases? If I wrote the blandest story possible, I’d lose all of my three remaining readers.

@golfchannel #AskLav what is your thoughts on David Duval this week at Pebble?

The good news: Double D has re-signed with Nike and seems to be in a good place with his health, his family and his life. The bad news: He hasn’t won in 12 years, has finished inside the top 125 in earnings just once in the last 10 years, and last year made just three of 17 cuts. If he ever wins again, call up Universal Pictures.