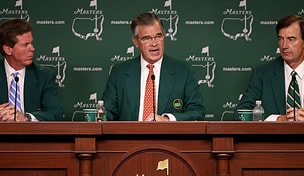 Winners of all PGA Tour events earning full FedEx Cup points now will receive an invitation to the Masters. That leaves only winners of the Puerto Rico Open, Sanderson Farms Championship and the Reno-Tahoe Open without an invite.

To make room for the added spots – Augusta National has always said it wishes to keep its field under 100 – only the top 12 finishers from the Masters will receive a return invitation for the next year. It previously was the top 16.

The top four from the U.S. Open will qualify for the Masters, a number that was previously the top eight. The British Open and PGA Championship recently have qualified its top-four finishers anyway, so streamlining to process seemed like a natural solution.

“During the past 12 months we have gained a more complete understanding of the modifications to the PGA Tour schedule and have made appropriate changes to our qualifications to adhere to our founder’s philosophy,” Payne said.

The top 30 money earners on the PGA Tour no longer will receive an invite. All the top 30 from last year qualified through other avenues.

The cut will move effective immediately. Beginning this year the top 50 and ties will advance to the weekend. It had been the top 44 and ties making the cut. The 10-shot rule is still in effect, meaning anyone within 10 shots of the lead will play the final two rounds.

“We believe offering more playing opportunities for the participants over the weekend is a positive for everyone involved,” Payne said.