The final round of the inaugural Augusta National Women’s Amateur, won by Jennifer Kupcho (Senior, Wake Forest University), is the highest-rated amateur golf telecast – men’s or women’s – in 16 years, with a .96 Overnight Rating (Noon-3 p.m. ET/9 a.m.-Noon PT) Saturday on NBC (1.36 Overnight Rating, 2003 U.S. Amateur Men’s Finals won on the 37th hole of a sudden death playoff, from 4-6:15 p.m. ET on NBC), according to data released today by The Nielsen Company. The Augusta National Women’s Amateur began with a GOLF Films short, When I Grow Up, I Want To..., which has garnered nearly one million views on social media this weekend.

NBC Sports’ coverage from Augusta National continues Sunday on GOLF Channel as 80 national finalists convene for the 2019 Drive, Chip and Putt National Finals. GOLF Channel live coverage airs until 1 p.m. ET today, and was kicked off with a GOLF Films short narrated by Tom Brady, entitled “Greatness.”  This youth skills competition showcases the talents of the 40 boys and 40 girls who advanced to the National Finals from more than 350 local and regional qualifying events across all 50 U.S. states amongst eight age groups (Boys/Girls 7-9; 10-11; 12-13 and 14-15). 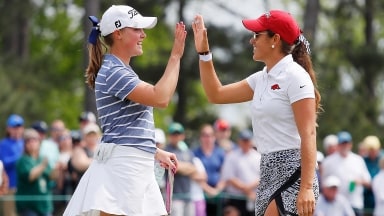