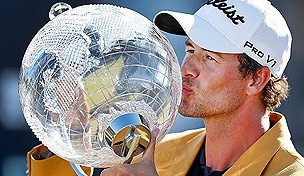 For the first time, Australia Masters' gold jacket will be handed out at Royal Melbourne Golf Club this year.

Having hosted the Presidents Cup in 1998 and 2011, reports confirmed Wednesday that Royal Melbourne will host the Australian Masters this fall, the 35th edition of the event. As was the case for the most recent Presidents Cup, the event will take place on what is known as the Composite Course at Royal Melbourne, largely made up of holes from the club's West Course, which was designed by Alistair MacKenzie and consistently ranks among the top golf courses in the world.

This year's event is scheduled for Nov. 14-17, though the date may hamper efforts to lure some of the game's biggest names to Oz. The European Tour is holding its DP World Tour Championship that same week, a tournament with a lucrative prize purse that annually serves as the closing event for the season-long Race to Dubai.