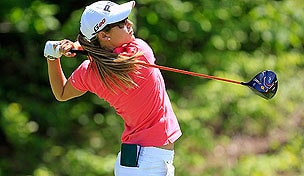 Getty Images
GLADSTONE, NJ - MAY 20: Azahara Munoz of Spain hits her tee shot on the second hole in the final of the Sybase Match Play Championship at Hamilton Farm Golf Club on May 20, 2012 in Gladstone, New Jersey. (Photo by Chris Trotman/Getty Images)  -

'It was a tough match,” Munoz said Tuesday on 'Morning Drive.' The wind was gusting, so we backed off a few shots. And then we were put on the clock.”

The Spaniard, however, didn't know Pressel had not picked up the pace after the two were warned – for a second time – at the 12th tee.

'I just wanted to make sure I was on time,' she said. 'I missed a 3-footer (for par on No. 12) because I didn't go through my routine. So walking to the next tee, I didn't think she was over the time because I didn't see how many seconds she took.'

Pressel had taken 29 seconds too long to complete her par 3 at the hole. LPGA rules official Doug Brecht called both players to the 13th tee to penalize Pressel with a loss of hole. Instead of falling 3 down in the match, Munoz was just 1 down.

Munoz won the match, 2 and 1, but not before Pressel accused her of placing her putter on the line of her birdie bid at the 15th hole. After a review of video footage, no penalty was assessed. Munoz made the putt and won the hole, the first of three consecutive victories to win the match.

Before taking down Candie Kung in the final for her first LPGA win, Munoz texted Pressel to break the tension. Pressel showed up at the practice ground to hug her friend, and then was on the 17th hole when Munoz won.

'It was really, really nice of her to come and tell me to please get this win,' Munoz said. 'She's my really good friend and, at the end of the day, that means more to me.'

Munoz's win was a tribute to her grandmother, who passed away the Sunday prior to the event. Munoz had been by her side the last two weeks, day and night.