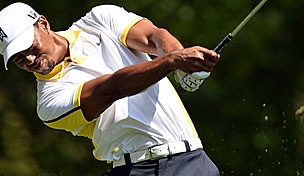 AUGUSTA, Ga. – It was a tale of two nines for Tiger Woods on Friday at Augusta National.

There was that opening effort, a flawless 3-under front nine. And then there was the inward loop, a struggle that added up to a 2-over 38 for a 71.

“My score doesn’t indicate how well I played today,” said Woods, who is tied for seventh and three strokes behind front-runner Jason Day.

Or, put another way, exactly where Woods feels comfortable at intermission in the year’s first major championship.

You get the picture.

Not that Woods spent Friday chasing. For a good portion of the afternoon he shared the lead thanks to birdies at Nos. 5, 7 and 8.

Yet just as Woods appeared to be on cruise control and he missed the fairway at the 15th and punched out to what appeared to be a perfect yardage (87 yards). Too perfect, it turned out. Woods’ approach ricocheted off the bottom of the flag and into the water hazard. He needed to convert a 4-footer for bogey, his only miscue of the day.

“I felt it was a pretty good shot,” he said. “I was pretty pissed. It was looking like I’m going to make birdie and now I have to struggle to make bogey. It was a good (bogey), but I felt I played really well today in a round that should have been in the 60s.”