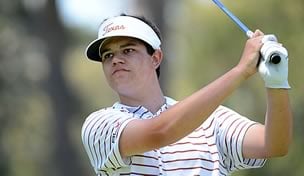 Jordan Spieth’s mid-season departure from the University of Texas could push top recruit Beau Hossler into the lineup earlier than anticipated.

Hossler, the 17-year-old who briefly held the lead at last year’s U.S. Open, signed with the defending NCAA champion Longhorns in December with the intent to enroll the following month. The original plan called for the former No. 1 junior to practice with the team, acclimate himself to college life, and begin his first year of eligibility in the fall.

But Spieth’s jump to the pro ranks, though not unexpected, may change those plans.

Later, Hossler said in a text message to GTC, “I’m still deciding (whether to sit out in the spring). Playing in the qualifier every time whether or not I travel. I will decide before our first tournament in Hawaii.”

The Longhorns begin their spring season on Feb. 6, at the UH-Hilo Intercollegiate in Kona, Hawaii. Hossler is able to practice with the team even if he decides to sit out the spring semester.

Texas, which won once in the fall, could use the boost. The best player currently on its roster is freshman Brandon Stone, whose 70.89 scoring average in the fall was 14th-best in the country.