Being No. 1 a great honor with immense pressure 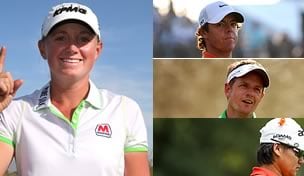 Getty Images
VIRGINIA WATER, ENGLAND - MAY 19: Lee Westwood of England runs to the next hole during the Pro-Am round prior to the BMW PGA Championship on the West Course at Wentworth on May 19, 2010 in Virginia Water, England. (Photo by Ross Kinnaird/Getty Images)  -

Stacy Lewis was only minutes removed from a final-round 64 that gave her a three-stroke victory at the RR Donnelly LPGA Founders Cup on Sunday, thrusting her into the spotlight as the game’s newest No. 1-ranked player, when she was asked about the notable burden of reaching that level.

Without hesitation, she smiled. Relishing the question and the upcoming opportunity to prove herself worthy, Lewis confidently claimed, “I love having that pressure.”

Time will tell whether she still loves it in the weeks, months and possibly even years to come. You can make a lot of enemies and ultimately appear foolish doubting a player who spent a hefty part of her childhood in a back brace due to scoliosis, but there’s no denying the disconcerting trend among top-ranked players recently.

It sounds like a flummoxing riddle: What does every professional golfer wish they had until they actually have it? The answer, though, is nothing to laugh at. It’s the world’s No.-1 ranking.

Ask any elite player about long-term goals and it won’t be long before they utter some semblance of the following: “To be the best in the world.” And yet, those who talk the talk find it difficult to walk the walk. After literally walking off the golf course three weeks ago at the Honda Classic, Rory McIlroy spoke about the pressures of playing with that bull’s-eye on his back.

“It's not like this is a new position,” he contended, sounding more like he was trying to convince himself  than anyone else. “I was sitting here this time last year, you know, just went to No. 1 in the world, so I guess I've had a year to get adjusted to it and get used to it. So it shouldn't be a problem.

“[But] you want to sort of prove that you are No. 1 and that's not the right way to go about things. You shouldn't have to try and prove that. You should just go out and play your game and if you play well enough, the rankings and the results will speak for themselves.”

Those words alone could prompt a special kinship between McIlroy and Yani Tseng, who held the top spot in the women’s game for more than two full years before being bounced by Lewis this week.

Call me cynical, but I have a tough time believing that placing a straight number instead of a crooked one in front of someone’s name, based solely on a statistical formula, can result in that much added pressure. Then again, there are only a handful of golfers who understand this quandary. Since the men’s ranking was implemented in 1986, only 16 players have held the No. 1 position; meanwhile, Lewis is just the seventh in the women’s game since 2006.

“I think everyone's looking up to the guy at No. 1,” Luke Donald, who held that position for 56 weeks, said recently. “They expect results. I expect results out of myself, too. You just feel like you need to perform and I think it's just a little added pressure that you put on yourself.”

Perhaps it’s only fitting that in this time, when being the lead dog apparently comes with additional strain, the one player who handled it best and for the longest period may be on the verge of regaining such status.

With a successful title defense at this week’s Arnold Palmer Invitational, Tiger Woods will become No. 1 in the world for the 624th week of his career – and the first time since Oct. 30, 2010. In light of McIlroy’s assertion that the top spot comes with added pressure, Woods has been asked about how it affected him as a young player.

See if you can spot the difference between what he maintains and the words of McIlroy, Donald and Tseng.

“It's just one of those things where for me, it happened at 21 years old and I was pretty young, just fresh out of college the year before,” he intoned. “And it happened very quickly for me. I won some tournaments, won the Masters, had a pretty good season in'97. For me, it wasn't necessarily the pressure of being No. 1.  It was more the scheduling. I had never played that much golf, playing around the world. … It (took) me until '99 that I made an adjustment on scheduling and finally got it right and had some pretty good years after that.”

So while most young No. 1 players lament the pressure, Woods said it most affected his … schedule. That’s not exactly a ringing endorsement for those who bemoan the struggles of dealing with a starring role in the spotlight.

Somewhere in here lies a lesson for the newly crowned Lewis. While other recent No. 1 players may pass along the warning, “Careful what you wish for,” the advice from Woods may come closer to, “Don’t sweat the small stuff.”

Not that becoming No. 1 is any small feat, but those who treat the ranking as less of a burden ultimately seem the least burdened by it over the long haul. It’s a delicate paradox, one which has left a number of top players feeling what Tseng called “a great release” after finally relinquishing the honor.

For now, after holding the No. 1 spot for mere minutes, Lewis insisted, “I love having that pressure.” Others have made similar brash statements, only to find later that the love doesn’t continue as the pressure grows. Now it’s her turn.