Crane: No issues with slow play this season 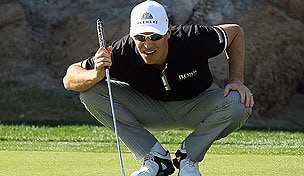 Ben Crane is probably best known for two things – his goofy videos in a helmet and unitard, and slow play.

The homemade video star struck again Monday, releasing along with the rest of the Golf Boys “2.Oh,” which already has 750,000 hits on YouTube as of 9 a.m. Tuesday.

As for slow play, Crane says he hasn’t had an incident this season.

“Certainly I’ve been working on my routine over the ball to tighten it up and think less, but really it’s about being ready when it’s your turn to play,” Crane said on “Morning Drive.” “That’s what’s helped me the most. I haven’t had an issue this year, so it’s been awesome.”

Much like Keegan Bradley and Webb Simpson became the face of the anchoring debate, Crane figures to see much face time when the U.S. Golf Association launches its slow-play initiatives.

The incident people likely remember most came at the 2005 Booz Allen Classic, where playing competitor Rory Sabbatini grew so frustrated with Crane’s slow play that he putted out of turn on the 17th green and stormed to the next tee before Crane even finished the hole.

“When I first came on Tour, I didn’t know I had an issue like I had until the Sabbatini incident,” said Crane, a four-time PGA Tour winner. “The PGA Tour has done a great job, and rules officials individually have helped me out being ready when it’s my turn to play.”

Crane said that the PGA Tour allows 60 seconds to play if you’re the first person on the tee or green, and 40 seconds for the second player.

“I think that’s very reasonable,” he said. “Everyone is going to get it done in that amount of time. There’s penalties, there’s consequences, there’s fines and we’re all paying attention to those things.”