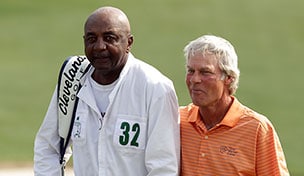 Carl Jackson does not worry about the weight of the bag, even after all these years.

The Masters is too important to miss, even with the gray sprinkled in his light mustache, even if Augusta National’s humps and hollows seem to shout for a younger man.

“I go to feel the spirit,” the 66-year-old said last week from Roland, Ark., in anticipation of his yearly loop with two-time Masters champion Ben Crenshaw. “The tournament has a spirit about it and it doesn’t matter if it’s raining or the sun is shining. I see why the older players hate to let it go.”

As a regular in the caddie yard, Jackson was once approached by President Dwight Eisenhower and asked why he wasn’t in school.

Jackson had dropped out in ninth grade because his family needed the money. He’s missed only one Masters since.

Though he now lives and works in Roland as the caddie manager at Alotian Golf Club, Jackson returns to his native Augusta this week for the same reason we go home for the holidays.

The memories are thick, whether rich or painful: the wins with Crenshaw in 1984 and 1995, of course, but also the losses; the knowledge that the club employed five of his brothers; the opportunity, once more, to lose himself amid loblolly pines and flowers of springtime.

He lived through the racial tensions of the times – the membership issues, the demise of the black caddie when the club allowed the use of PGA Tour caddies – and has emerged with his optimism intact.

He chronicles much of his life in the upcoming book “Two Roads to Augusta,” written with Crenshaw. It traces the backgrounds of both men and how each, with the help of the other, has left an indelible mark on the year’s first major.

Jackson’s mind is a treasure trove of Masters stories.

He remembers, in 1996, carrying Crenshaw's bag during a practice round that included Tiger Woods, fresh off back-to-back U.S. Amateur titles.

Jackson kept a pack of Marlboro Lights in his caddie bib.

“I would always throw down the pack to suggest where a certain pin would be,” Jackson said. “I’d suggest that Ben try certain putts, and then Tiger would follow. Tiger followed Ben on every one of those greens.”

Woods missed the cut, but he tracked down Jackson before he left.

“I could tell he was in a hurry, but he found me just to say thank you,” Jackson said. Woods then told Jackson, “Those pins were exactly where you said they were going to be.” Woods won by 12 shots the following year.

Crenshaw arrived at Augusta with his game in tatters. After a practice round, Jackson pulled Crenshaw aside and directed him to the practice area.

“You have to be careful when you interfere with a pro’s swing thoughts, but what I’ve always respected about Ben is if I’ve got something to say I found a way to say it,” Jackson said.

The caddie told his player to put the ball farther back in his stance and to turn his shoulders more.

“After about three balls, he had it,” Jackson said. “It held.”

With players such as Greg Norman and Davis Love III on the leaderboard, Crenshaw was somehow able to keep his swing and emotions intact.

He arrived at the 18th hole with a two-shot lead. Jackson could already see the moment was weighing on Crenshaw.

“I was watching and being protective of Ben the whole week,” Jackson said. “People in the gallery kept reminding him of Mr. Penick. He lost it on 18 fairway, really. Hit a great drive and had an 8-iron to the green and some of the gallery started congratulating him and offering condolences. I had to say, ‘Ben, we have more golf to play here.’ And sure enough he hit a bad 8-iron into a dangerous position.”

“If he hits it a little short or soft, it will come back down the fairway,” Jackson said. “I suggested to Ben to play it way over to the right and let the slope bring it back toward the hole and he agreed to that. Some reporter said it was a terrible chip, but he didn’t know we were going where we could make bogey.”

Crenshaw did just that, rolling in a short putt and dissolving into tears as Jackson tried to hold him up.

Crenshaw through the years has repeated a refrain about Jackson he said that Sunday: “I can’t say enough about that man.”

Jackson and Crenshaw will team again this week, and they know their time at the Masters is short. They’ve stood side by side at every tournament since 1976, the only exception the 2000 Masters when Jackson missed the tournament while fighting colon cancer.

Crenshaw is 61 and the course is long and the chances for a third green jacket seem less than remote.

“Ben's fire’s still burning,” Jackson protested.  “That champion’s fight, it has to subside before you can quit. I watch good putters, but they can’t do it like Ben. His putting stroke was made for fast greens, period. That man knows something about feel that nobody else knows.”

The same can be said of his caddie.