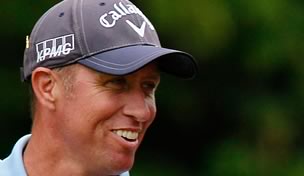 Here at GolfChannel.com we like to celebrate every holiday, no matter how big or small. With Wednesday being national Best Friends Day, we thought it would be appropriate to take a closer look at the faithful caddie.

While the constant accolades and recognition go the guys whose names litter the leaderboards week in and week out, when it comes to nicknames, it doesn’t get any better than their friend carrying the bag. Not sure if this is a coincidence or if nicknames just somehow lend themselves easier to men who carry another man’s luggage for a living, the way bacon and cheese lend themselves to … well, everything.

Either way, take some notes TO, AI, CP3, DWade, D12, KG, MJD, RGIII and what seems like every other professional athlete from the last 15 years. Some combination of your initials and jersey number is not a nickname, it’s just lame.

Here are some of the all-time best nicknames on the PGA Tour belonging to the stars’ better halves.

Mike “Fluff” Cowen – Has worked with Jim Furyk since 1999 and Tiger Woods for three years before that. Fellow caddies gave him the nickname Fluff for his resemblance to former pro golfer and broadcaster Steve Melnyk, who was also know by that name. Although one could argue the name fits his ever-present white mustache perfectly.

This admittedly is a very small sample size. There's hundreds more loopers out there who go by a singular name instead of the standard first and last that we have all become accustomed to. If you can drag yourself away from your Best Friend Day celebrations, feel free to share your favorites in the comments section below.