Best Dressed: The King of the Florida swing 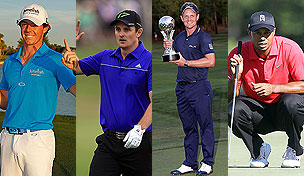 Getty Images
AKRON, OH - AUGUST 09: Padraig Harrington of Ireland plays his approach shot on the 16th hole during the final round of the World Golf Championship Bridgestone Invitational on August 9, 2009 at Firestone Country Club in Akron, Ohio. (Photo by Stuart Franklin/Getty Images)  -

The Florida swing – the Honda, WGC-Cadillac, Transitions and Arnold Palmer Invitational – delivered some of the most animated action we’ve seen at any PGA Tour stop so far this season.

Rory McIlroy held onto his 54-hole lead, held off a late-charging Tiger Woods, won his third PGA Tour title and at 22, ascended to the top of the world ranking.

Justin Rose rallied on Sunday from three strokes behind Bubba Watson to capture his first ever WGC event and even amidst the Tiger Woods withdrawal buzz, proved worthy of the spotlight by night's end.

Luke Donald won a four-man playoff on the first extra hole when he knocked his approach to the par-4 18th to 6 feet and rolled it in for birdie. He made a smooth transition back into the No. 1 spot – which he lost two weeks prior to McIlroy – at the Transitions Championship for his fifth career PGA Tour victory.

And of course, the man in Sunday red created the biggest commotion when he ended his 30-month PGA Tour winless drought at the King's house.

The Florida swing victors delivered drama, but which one had the most style en route to hoisting their Sunday silver?

The answer is none other than Generation Now poster boy Rory McIlroy. His sky blue top paired with white pants looked sharp, sporty and spot-on for a man taking over the No. 1 spot.