Excel from bunkers the same way Mickelson does 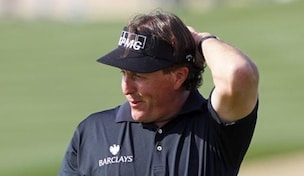 The PGA Tour’s annual visit to TPC Scottsdale for the Waste Management Phoenix Open is one of the most unique spectator tournaments in golf.

For the players, however, they have to adjust to a type of golf course they don’t see every day: the desert course.

Deserts typically mean sand and lots of it. For most amateurs, sand can be a scary thing on a golf course. Tour players, on the other hand, rarely seem to be affected at all by sand.

What Phil Mickelson sometimes lacks in driving accuracy, he makes up for in short game ability, especially his magical bunker play.

Mickelson’s wire-to-wire victory over the weekend included below average driving accuracy, but above average scrambling percentage.

The best bunker advice I ever received was to not hit my ball in them! But when that doesn’t work, here are a few things you can learn from Phil to become a better bunker player:

• Use your feet to judge the texture of the sand. Tour players have an advantage over most amateur golfers because the sand on Tour courses is generally manicured perfectly. For the rest of us, if there is sand at all, it can vary in depth and texture from bunker to bunker. Pay close attention to how your feet interact with the sand to judge how you’ll need to hit your shot.

• Maintain a good swing tempo in the bunker. Speeding up to “blast” the ball from a bunker can cause big problems. Resist the temptation to hit at the ball and make sure the club accelerates through the sand.

• Dave Pelz found in his research a few years ago that the average greenside bunker shot was 30 feet from the hole. So in your next short game practice session, find a 30-foot bunker shot and wear it out. Mickelson once said that he would keep practicing bunker shots until he holed one. If it got dark, he would come back the next day and continue until he made one. Practicing bunker shots is the only way you can develop the confidence tour players have in the sand.