The largest grand prize in the history of Big Break will be up for grabs when Golf Channel’s longest running reality-competition series tees up its 19th season Monday, May 13 at 9 p.m. ET.  Big Break Mexico will feature a cast of 12 professional golfers looking to put his or her career on the fast track, competing for a sponsor exemption to either the PGA TOUR’s OHL Classic at Mayakoba or the LPGA Tour’s Lorena Ochoa Invitational presented by Banamex and Jalisco (both Nov. 14-17) and more than $100,000 in cash and prizes.

In addition to the tournament exemption, the ultimate winner also will receive $50,000 in cash; an endorsement contract from Adams Golf, which includes an additional $10,000 in cash; $5,000 in cash from Dick’s Sporting Goods; $10,000 in car rental credit courtesy of Avis Car Rental, $15,000 in travel credit from Travelocity; and an all-expense paid return trip for two to the all-inclusive, adults-only IBEROSTAR Grand Hotel Paraiso in Riviera Maya, Mexico.  The winning team on Big Break Mexico also will receive $30,000 in cash courtesy of Macanudo.

Featuring a cast of six men and six women competing as three mixed-gender teams, Big Break Mexico will include a new series format, new challenges, twists and surprise guest appearances.  The teams will compete in a variety of golf challenges per episode, with the ultimate goal of knocking the others out of the competition.  In a new format twist for this season, eliminations will not take place every week.  Losing teams at the end of early episodes will earn “strikes,” with a surprise elimination showdown taking place during the course of the series.  The series eventually will shift to single eliminations, with the last person standing – male or female – being crowned Big Break Mexico champion.

Golf Channel’s Tom Abbott and Stephanie Sparks return as co-hosts for the series.

Big Break Mexico also will feature a guest appearance from former LPGA World No. 1 Lorena Ochoa, who surprised the cast during the filming of the series and competed alongside the players in one of the challenges.  Following the challenge, Ochoa also was given the opportunity to participate in Big Break’s signature challenge for the first time – The Glass Break – where she shattered the glass on her first attempt.

The Big Break show concept pits highly skilled golfers against each other in a variety of challenges that test their physical skills and mental toughness.  Past Big Break champions have won tournament exemptions to compete on some of the world’s top professional circuits, including the PGA TOUR, Champions Tour, European Tour, LPGA Tour, Web.com Tour and Canadian Tour.  Mark Silvers, Big Break Greenbrier champion, will compete in the 2013 Greenbrier Classic on the PGA TOUR as a result of his victory in 2012. 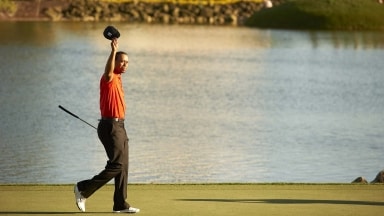