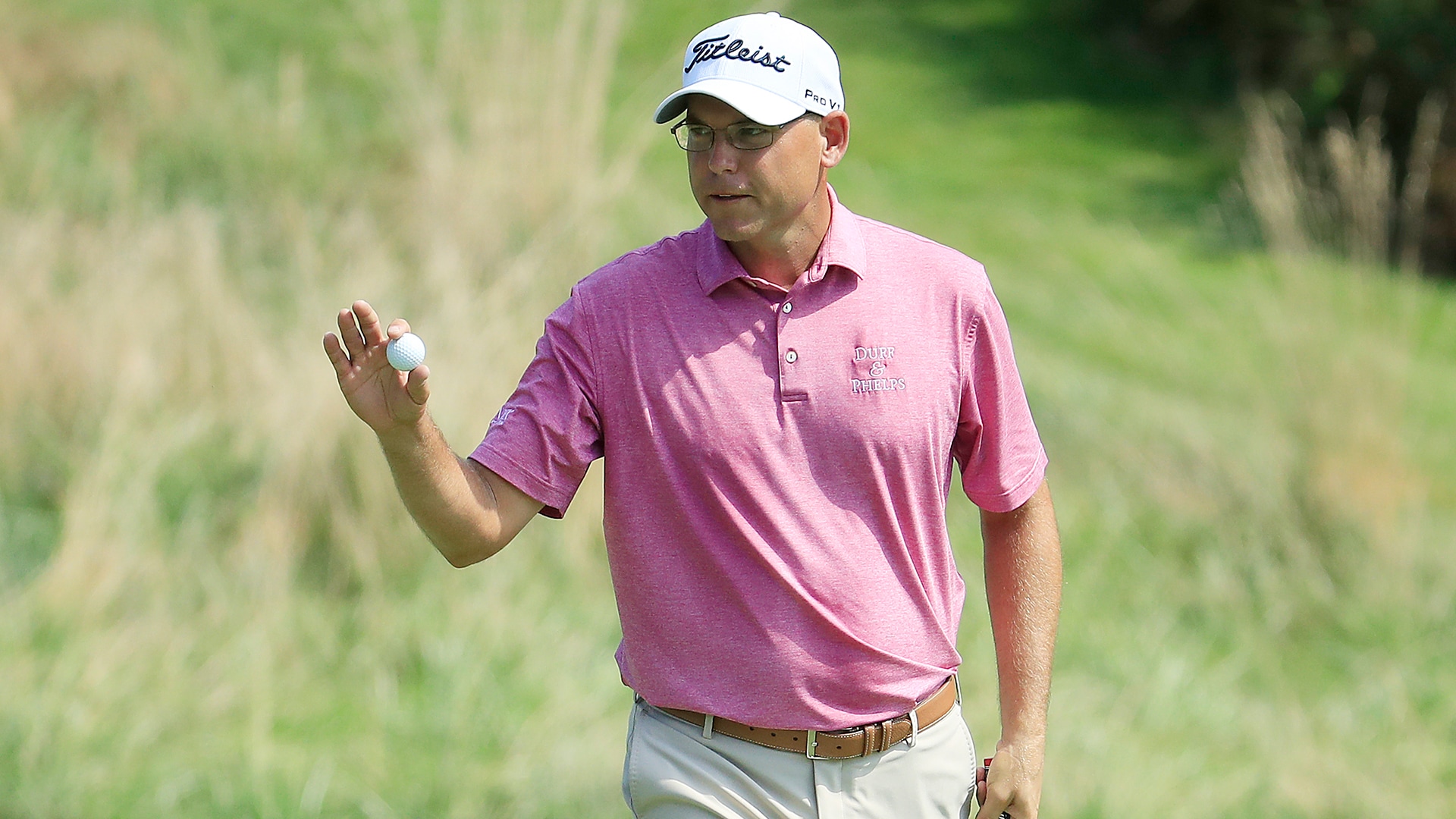 GREENSBORO, N.C. – Among the scores of players at the Wyndham Championship trying to breathe life into the embers of PGA Tour status, those for whom the sweltering Greensboro temperatures carry a little extra heat, Bill Haas stands out.

Looking at his lanky frame strolling the fairways at Sedgefield Country Club, you wouldn’t have any inkling of what’s at stake over the next 72 holes. His familiar visage bears a pair of thin, wire-rimmed glasses but not a bead of stress-induced sweat.

Such are the comforts of a lucrative career, one that includes six PGA Tour victories and more than $30 million in on-course earnings. They can afford a little extra breathing room, even as Haas joins the throng trying to gatecrash the FedExCup playoffs in the final hour, entering the regular-season finale at 140th on the points list with only 125 moving on. But even for the man who snagged the eight-figure top prize back in 2011, sometimes looks can be deceiving.

At age 37, Haas has been in the midst of a slow, steady decline that has been months in the making. A regular in the Wyndham field, he left this event two years ago ranked No. 37 in the world. He returned this week ranked 338th.

Not much has gone as Haas had hoped in the interim, a difficult trend that corresponds with a harrowing off-course event.

It was last February that Haas, in Los Angeles for the Genesis Open, was involved in a serious car crash a short drive from Riviera Country Club. While he emerged with only scrapes and bruises, the driver of the car, Mark Gibello, did not survive. Gibello and Haas were friends, having played golf together just a few days before the accident.

Haas took more than a month off in the aftermath, returning to action while still dealing with bruises and leg pain stemming from the crash. Asked about the impact the incident may have had on his recent on-course slide, Haas opts to focus on the physical.

“I think I struggled to play for the first two months of it, just my legs were banged up,” Haas said after an opening-round 66 at Sedgefield. “They weren’t broken, they were just hurting and all that. But I could play golf, and I felt like in the position I was in, I needed to play. And I played through it, and who knows. Maybe that caused some stuff.”

It’s the who knows that can linger after a tragedy. How his week at Riviera might have played out differently, how his season might have taken on a more consistent trajectory. How this season, where he has played the last two weeks in Lexington and Reno instead of Portrush and Memphis in an effort to chase status, might have fared.

Haas’ laid-back, affable demeanor belies a man struggling with the what-ifs. His father, Jay, won nine times on Tour and has remained a constant resource and sounding board for his younger son. But this year, the paternal catch-up sessions have veered from fairways and greens to more probing topics, like sleep patterns.

“Just a few weeks ago, he said to my wife, Jan, to his mom, that he thinks about (the accident) every day,” Jay Haas said. “In his mind, somewhere, it’s just there. That’s an indelible mark.”

Father was in the gallery Thursday as son completed a bogey-free opener, one that left him four shots off the early lead on a day where low scores were in abundance. It’s a step in the right direction for Haas, who has shown bursts of his previous form but has struggled to sustain it, with no finishes better than T-10 since April 2018.

“There’s no one thing. I wish I could just change something, flip it, and be in the top 30 in the world again,” he said. “But it’s just been a struggle.”

That struggle has been evident to his peers on Tour, those for whom appropriate words of wisdom or encouragement have sometimes been difficult to find.

“I can’t imagine going through that. I don’t think you can understand it unless you’ve been through it,” said friend and fellow Wake Forest alum Webb Simpson. “I hated it for him. I know they were good friends, and it’s scary, especially since Bill has young kids. But something like that, I’m sure, will change you.”

Compared to many other players on or around the bubble, the consequences of a near-miss this week for Haas are somewhat tempered. He’s assured of retaining at least conditional status, a category from which he gleaned 23 starts this season. Then there’s the comfortable living he dug out of the dirt over the last 15 years, including that $10 million payday from his watery up-and-down at East Lake eight years ago. For Haas, 2020 prospects are not an all-or-nothing proposition.

But that solace doesn’t blunt the pain that lingers long after the bruises have healed, or the fact that every birdie and bogey he makes this week will still be viewed through the prism of a tragedy he endured 18 months ago.

“I have to think of it as how lucky I was. The other guy in the car wasn’t as lucky. His family doesn’t even have him, and I’m complaining about not playing good golf,” Haas said. “It’s a double-edged sword. I want to play better golf, but I’m also lucky to have the opportunity to do it. So I’m not trying to be cliché and all that stuff, but at the same time, there’s bad and good. And you’ve got to weigh on the good, or else you’ll be miserable.”