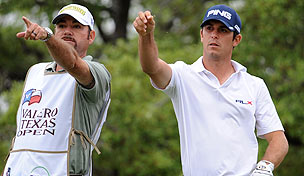 SAN ANTONIO – Staked to a two-shot lead, Billy Horschel vowed to play “free” and “more at ease” in the final round of the Valero Texas Open.

But PGA Tour Sundays can do strange things to players.

“The first couple holes I felt good, but it felt like I had Jell-O legs,” Horschel said after a final-round 71 dropped him into a tie for third, three shots behind Martin Laird.

It seemed to show early, as Horschel played his first five holes in 1 over par to drop out of the outright lead. Over that stretch, he said, “I hit it very pathetic in my mind.”

Horschel hung around for much of the day, keeping in touch with the red-hot Laird until he bogeyed the par-3 13th. Two birdies in the last four holes helped him salvage his second consecutive top-3 finish, however.

“I felt like I handled the whole situation today the best I have since I’ve been in this situation,” said Horschel, 26, who was in the final pairing for the fourth time in his young Tour career. “I think that’s the best thing that could come out of the day.”