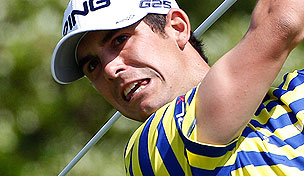 Players were greeted by blustery conditions Saturday in San Antonio, where gusty winds made breaking 70 a formidable challenge. Here’s the skinny heading into the final round of the Valero Texas Open, where Billy Horschel remains out in front by two shots:

What it means: With the field facing difficult scoring conditions, Horschel held at least a share of the lead for nearly the entire round. He spent most of the back nine at least two shots ahead as several challengers faded back to the pack, and will now take a 54-hole lead into Sunday for the first time in his career.

Round of the day: After opening with back-to-back rounds of 71, Palmer was well off the pace entering the weekend. Despite windy conditions Saturday, though, the Texan was able to survive the third round without dropping a shot. His 4-under 68 included three birdies in a five-hole stretch on the back nine, and the round moved Palmer up 25 spots on the leaderboard into a tie for fourth.

Best of the rest: A winner of this event 19 years ago, Estes tamed the difficult conditions while shooting his second straight 3-under 69 on the AT&T Oaks Course. Like Palmer, Estes calls Texas home, which likely helped Saturday as he carded four birdies against one bogey while becoming one of only five players to break 70 in the third round.

Biggest disappointment: Beginning the third round just three shots off the lead, Retief Goosen appeared in position to challenge for his first PGA Tour win since 2009. The South African began with a double bogey on the opening hole, though, and things got worse after a triple-bogey 8 on the par-5 eighth hole. Goosen added another double bogey on the 12th en route to a surprising 8-over 80, which dropped him into a tie for 60th after three rounds.

Main storyline heading into Sunday: Can Horschel hang on for his first career title? A week after his runner-up finish in Houston, the Florida grad has been near the top of the leaderboard the whole week. To take home his first trophy, though, he will have to survive the pressures of a final-round lead with the world No. 2 nipping at his heels.

Shot of the day: In the midst of a difficult round, Brian Gay received a bit of a boost at the par-4 11th. After his approach shot left him in the rough short and right of the green, the 2013 Humana Challenge champ hit a pitch shot that landed softly before rolling into the hole for an improbable birdie. It was one of only two birdies on the day for Gay, though, who struggled to a 4-over 76.

Quote of the day: 'I had a couple chances coming in that I just didn’t take advantage of…I’m still in a decent position going into the last day, and hopefully I can make a run at it.” – McIlroy