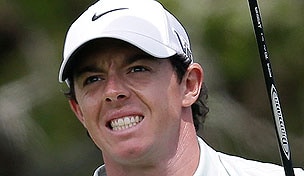 After difficult conditions led to high scores Thursday, players fared a bit better during Friday’s second round at TPC San Antonio. Here’s a recap of how things stand at the Valero Texas Open, where Billy Horschel holds to a two-shot lead over a trio of players heading into the third round:

What it means: With another crowded leaderboard in Texas, this event remains wide open heading into the weekend. After his runner-up finish in Houston, Horschel now leads at the halfway point in San Antonio, in search of his first career PGA Tour victory that would bring with it an invitation to the season's first major.

Round of the day: After starting his round Thursday with three bogeys in his first four holes, Choi was able to battle back and salvage an even-par 72. His round Friday required no salvaging, though, as the South Korean carded a bogey-free 67 to move within three shots of the lead. Choi began with a birdie on the second hole before adding four more on the back nine, including red numbers on each of the final two holes.

Best of the rest: Doing his best to silence critics with a single round, McIlroy carded seven birdies Friday en route to a 5-under 67 that moved him to within two shots of the lead. The Ulsterman birdied each of the closing three holes, reaching 15 of 18 greens in regulation during a second round that put him firmly into contention heading into the weekend.

Biggest disappointment: Entering the week inside the top 50 in the world rankings and having tied for third at Bay Hill in his last start, Gonzalo Fernandez-Castano began the week on the short list of potential contenders at TPC San Antonio. After rounds of 75 and 74, though, the Spaniard surprisingly missed the cut by four shots in his final start before the Masters.

Main storyline heading into Saturday: Is McIlroy on the way to re-writing his 2013 narrative with a win in Texas? The world No. 2 appeared lost during his opening round, but after a Friday birdie barrage, he now sits within striking distance among a group of leaders that in general lacks pedigree.

Quote of the day: 'I don't think it's a surprise at all ... just a matter of getting a few more rounds to put it all together.' - McIlroy