Horschel not a 'slow learner;' on verge of first win 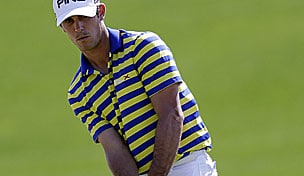 Oh, no. Much more than that.

Horschel already owns the longest active made-cut streak on the PGA Tour, at 21. But after his T-2 at Redstone, he now has earned more than $930,000 in nine starts, which will be more than enough to retain his playing privileges for next season.

After turning pro in 2009 after a standout career at Florida, and then advancing through Q-School, his rookie season was derailed by a wrist injury that eventually required surgery. Even after receiving a major medical extension, he took detours to Q-School each of the past two years.

“I thought right after I got my card, I thought it was going to be smooth sailing,” he said. “Then it took me a year to get back to playing somewhat good golf, and it took me another year to understand how to control my emotions and what I needed to do day-in and day-out to play well out here. It’s not that I’m a slow learner; it’s just taken me a little time.”